East Carolina University underwater archaeologists and graduate students from the Department of History's Program in Maritime Studies recently returned from a research expedition to the Caribbean Coast of Costa Rica.

"According to folklore and historical research the ships are either pirate ships or slave traders that wrecked in Punta Cahuita Bay," said Harris.

During the 18th century the area was a highly contested landscape where English, Spanish and other colonials competed for local resources and allegiances with Miskito Indians. Pirates careened their ships, captured slaves, purchased food products and took aboard fishermen as turtle harpoonists.

In 1710, due to a navigation error, two Danish slave ships, Christianus Quintus V and Fredericus Quartus IV, are believed to have wrecked, releasing 800 slaves - including men, women and children primarily from West African ports - who were recaptured or assimilated into local communities. Historic records and linguistic studies reveal that many were likely of Yoruba origins (present day Nigeria and Benin). 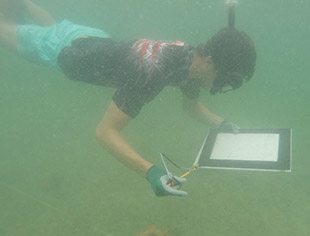 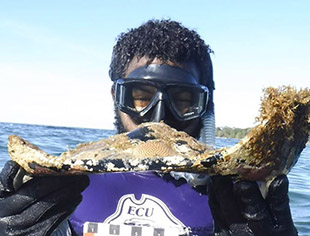 ECU student Joel Cook holds a historic bottle base in a mapping grid unit for photography and immediate redepositing on the seabed.

The ECU team studied two shipwrecks in the park with unknown identities and searched along the shore for other candidates. They mainly focused on examining coral encrusted cannons, an anchor and structural evidence hidden under the extensive coral reef.

Students mapped a shallow 200-by-200-meter area from the site to shore, yielding hundreds of artifacts, including pottery, pipes, glassware and bricks.

"The most compelling evidence to date is the bricks, which resemble the smaller Danish flensburger type, ranging from about 210 to 230 mm long, historic bottles that date to the period of the wrecks and manillas - or slave trade bracelets - that the community and park officials have acquired in donated collections," said Harris.

According to Harris, bricks were used to build warehouses, forts and roads at colonial outposts in Africa and the West Indies. Building supplies and other commodities like ivory tusks were additional paying cargo to offset human cargo mortality on slave voyages and to ballast the ships. Manillas were popularly used by all nations as currency for the purchase of slaves in Africa from the 1500s to 1900s.

"At present, the lack of a waterlogged artifact conservation facility in Costa Rica limits object recovery," Harris said. "Therefore, the goal was to locate diagnostic surface artifacts on the sea bed to answer specific research questions about the wrecks."

The combined U.S., Costa Rican and Danish team at the beach.

Each artifact was mapped and identified within the grid system. Some items were temporarily brought above water for photography on the site and then immediately returned to the seabed.

"A challenge to this project is balancing a research agenda with maintaining the sites in situ as park monuments, educational resources, marine-life substrates and tourism investments for local snorkeling group outfitters," Harris said.

An integral part of ECU's project initiative is community memory, stewardship and education. Through the project, ECU has increased collegial collaborations and partnerships with the University of Costa Rica and local educational marine ambassadorial groups, such as the Centro de Buceo Embajadores y Embajadoras del Mar, that have participated in the projects alongside ECU divers.

ECU also hosts educational community training workshops for project participants sanctioned by the international agency Nautical Archaeology Society. This year, archaeologists, curators, historians from the National Danish and Viking Museums and a documentary film maker visited the project with an interest in the Danish slave trade narrative and in joining the collaborative initiative.