Candidate Obama Leaps to Deity Status in Lake County, Florida | Beaufort County Now | The "hope," the "change," and the "kool aide" of deep affective devotion is still a condition of the most devoted Obama supporters here in America, and most especially in Lake County Florida.

Login to Send a Private Message to Stan Deatherage
The "hope," the "change," and the "kool aide" of deep affective devotion is still a condition of the most devoted Obama supporters here in America, and most especially in Lake County Florida.

It is true, and as alarming as it may seem to true patriots of this great land, which some us still love, and revere because of the pure selfless devotion of our forefathers, and other supreme patriots that continue to walk among us, there are great usurpers of that benefit of heritage, who just don't care. The really just don't care, and we must live with them every day in some measure of harmony; however, I think it is most wise to recognize them for their devotion to their false god, whenever necessary.

And just what is their false god?

It is the great false god of stupidity, which they are sworn to for whatever reason, and to embellish their purpose in life, they do and say the stupidest things, and when you take the time, and muster the temerity to call them down for it, they get really angry, and often quite profane, or just devolve to a new layer of greater stupidity.

The latest, greatest blunder by the "kool aide" drinking intellectually disadvantaged was to superimpose the likeness of their idol, Barack Obama, over the stars portion of the old Stars and Stripes. You read me right: The Lake County Democrat Party showcased their idolatry of their "transformational" leader by flying Barack Obama's image, on the defaced United States symbol of unambiguous patriotism, just below the true American Flag at the Lake County Democrat Party Headquarters in Florida.

To some the defacement of the Flag represents a traitorous action. I prefer to simply to think of these party Democrats as "stuck-on-stupid."

And while some may consider the term of stupid as harsh, possibly uncivil criticism, I merely see it as publicly calling into question the avowed mental acuity of individuals that seek to influence our lives. Our President, and his devoted minions, are fine examples of such, and I do consider it my patriotic duty to make mention, in great alacrity, in all the time I can muster. I suppose someone - maybe even myself - is fortunate that my time is quite spare in quantity; however, today, as I view Obama's image superimposed over the Flag that so many Americans have perished defending ... I found a bit of time.

From a logical perspective, one must consider the government, and various branches of governing, of this Republic representative of the respective constituencies within the national electorate. Accordingly, I not only judge the politicians, but their constituencies that elected them. This will be an ongoing assessment that will fairly expose that political symbiosis for good, and for worse.

Today, I draw my aim on the Lake County Democrat Party, and make fair assessment of who they are, and the false god of their choosing - Barack Hussein Obama. In the American political structure, both codependent parties are inextricably linked, and both will succeed or fail as one unit. Accordingly, I will be only too happy to cast the BCN light of truth upon the egregiously unpatriotic activities of either. This flag desecration certainly qualifies.


Here below is an image of the offending flag flying over the Lake County Democrat Party Headquarters, and the Fox News story exposing this patriotic heresy: Below. 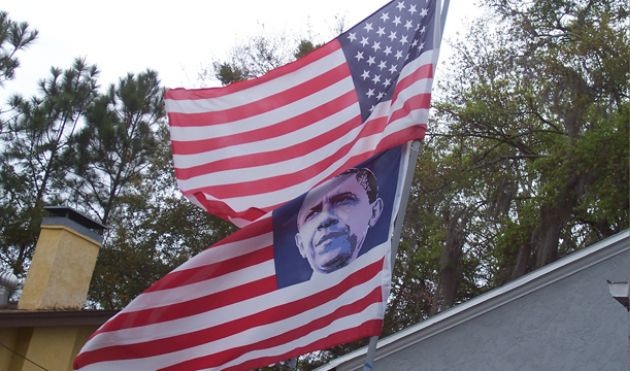 An American flag with President Obama's image in place of the stars flew over a Florida county's Democrat headquarters long enough to enrage local veterans who called the altered banner "a disgrace."

Lake County Democratic Party officials took down the flag, which flew just below a standard Old Glory on the flagpole outside headquarters in Tavares following complaints by local veterans. But merely taking it down wasn't enough for several local veterans, who said they fought for the flag Betsy Ross made famous, not one with a politician on it.

"It's absolutely disrespectful," Jim Bradford, a 71-year-old veteran who participated in the Bay of Pigs Invasion told FoxNews.com. "It's totally ridiculous. To put somebody's picture there, to me, it's a disgrace to do that."

"It's absolutely disrespectful," Jim Bradford, a 71-year-old veteran who participated in the Bay of Pigs Invasion told FoxNews.com. "It's totally ridiculous. To put somebody's picture there, to me, it's a disgrace to do that."

Bradford, an organizer with the Veterans Memorial at Fountain Park in Leesburg, Fla., snapped photos of the flag and distributed them to fellow veterans and friends. By late afternoon, he and several other veterans delivered a copy of the federal flag code to Nancy Hurlbert, chairwoman of the Lake County Democratic Party.

"We read that to her, but she would not accept that," Bradford said. "The discussion finally got a little bit heated."

The flag, which had been flying for several months without complaint and is available online for $12.95, was later removed by Hurlbert.

Bradford said Hurlbert apologized for the incident, but did not offer any promises that it wouldn't fly again.

"What really upsets me is that the flag had apparently been flying for months and no one had done anything about it," Bradford said. "I've got no hard feelings toward [Hurlbert], but people will be driving by there to make sure it doesn't go up again."

Hurlbert said Tuesday's incident was the first time anyone had complained about the flag, which she received as a gift two months ago.

"It leads me to believe that it's not about the flag," she told FoxNews.com. "Certain elements cannot accept Barack Obama as president."

Hurlbert said she intends to contact an attorney regarding the matter and remained non-committal as to whether she'll fly the flag again.

Jenn Meale, communications director for Florida Attorney General Pam Bondi, referred FoxNews.com to state laws that pertain to the use of flags on public lands and property when asked for clarification as to whether Hurlbert could face any penalties.

Statute 256.05, which covers improper use of state or United States flag, or other symbol of authority, reads: "No person shall, in any manner, for exhibition or display:

"While we are pleased the flag in question has since been removed from public display, the reported fact that it had flown for months without protest is a clear indication that we have much work to do in educating the public of the importance of protecting our flag," Agg wrote in an email. "This issue is especially important to AMVETS' members, the men and women who have proudly worn our nation's uniform and served under her flag."

The final insult to veterans? The flag is made in China.


Lake County Democrat Party Chairman Nancy Hurlbert: A zealous Liberal laboriously loving her president, a traitor, or just another American "stuck on stupid, with way too much time on their hands" - it is one of the these three choices - there are no others. Watch the video below and you decide.
Go Back