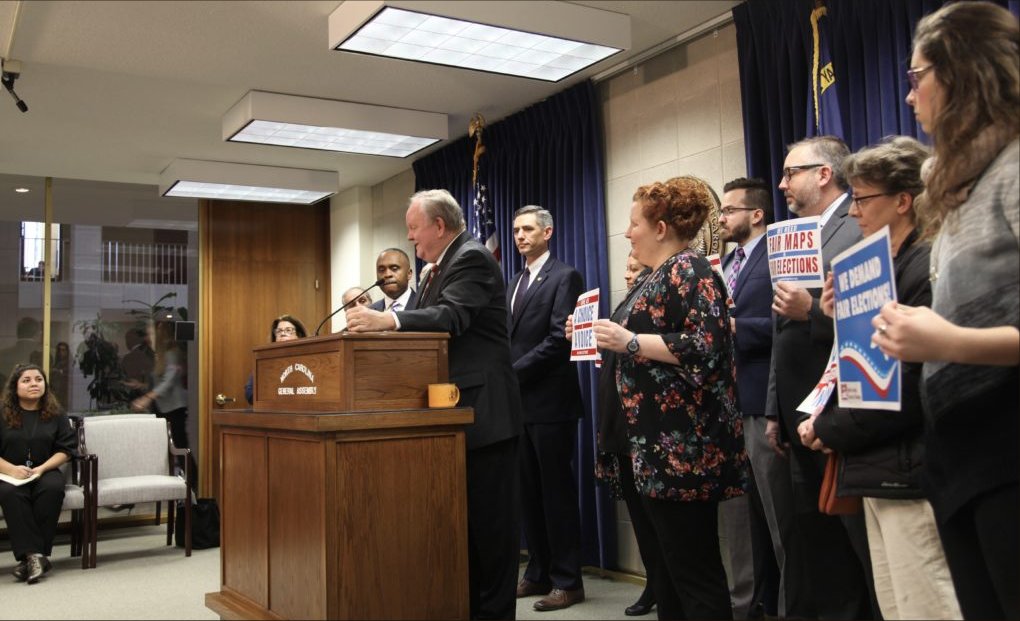 The four primary sponsors of House Bill 69 said at a new conference legislative leaders are beginning to hear the public outcry over decades of redistricting lawsuits. Some cases have reached the U.S. and North Carolina supreme courts, eroding confidence in the integrity of elections and the basic competence of government.

H.B. 69 is one of several measures the General Assembly is likely to consider this session, said Rep. Chuck McGrady, R-Henderson, a primary sponsor of the measure. Some proposals will be statutes and others would amend the state constitution. All have the goal of creating a nonpartisan, transparent system of drawing legislative and congressional districts and limiting the time and money spent on lawsuits.

The N.C. Constitution requires the legislature to approve the maps. But it doesn't require lawmakers to draw them. In a state evenly divided between Republican- and Democratic-leaning voters, members of both parties worry about being drawn out of power when districts are reset after the 2020 census, depending on who's in charge of the General Assembly.

H.B. 69's answer is a system similar to Iowa's, with a commission designing the maps. An 11-member commission would include four members from each of the two largest political parties serving no more than three four-year terms. The other three members couldn't be affiliated with the two major parties. The plan would enable participation from unaffiliated voters, or members of other recognized parties, such as the Libertarian, Green, or Constitution parties.

The commission would hire staff to help draw the maps, hold at least 21 public hearings around the state to receive input, and make computers and software technology available to members of the public who wish to propose maps.

The maps would have to comply with state and federal constitutions and the Voting Rights Act. Under the bill districts couldn't favor a political party or incumbent official. Nor could they dilute or increase minority voting strength. They couldn't be skewed based on registered voters' political affiliations, previous election results, demographic information other than population, or incumbents' residences.

McGrady filed a nearly identical proposal last year, and bills with similar components have been introduced over the past decade.

Jane Pinsky, the director of N.C. Coalition for Lobbying and Government Reform, one of the driving forces among the nearly 30 groups pushing redistricting reform, acknowledged lawmakers might reject commission-drawn maps they don't like. But if they tried to amend them on a partisan basis voters would see that, and the weight of negative public opinion would prevent such moves.

He said H.B. 69 would remove partisanship from the map-drawing process.

"I think this issue polls very well, whether we go the statutory route or we put this forward as a constitutional amendment," said Rep. Jon Hardister, R-Guilford, a primary sponsor.

The other primary sponsor is Rep. Brian Turner, D-Buncombe.

Bob Phillips, executive director of Common Cause NC, a longtime redistricting reform proponent, said 10 years ago, while they were in the minority, House Speaker Tim Moore, R-Cleveland, and Senate leader Phil Berger, R-Rockingham, proposed legislation much like H.B. 69.