House unveils $1.9-billion school construction bond bill | Beaufort County Now | Of that money, $1.5 billion would go to public schools. Community colleges would get $200 million, and the state's universities would receive the remaining $200 million. 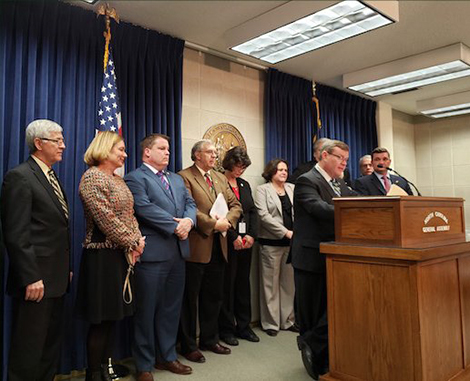 Of that money, $1.5 billion would go to public schools. Community colleges would get $200 million, and the state's universities would receive the remaining $200 million.

"We have a consensus that a skilled workforce needs 21st century classrooms for our state," House Speaker Tim Moore, R-Cleveland, said during the news conference. "To train our workforce for the needs of tomorrow we must meet the needs of the classroom today."

"The House bond proposal is an immediate injection of supporting resources for school construction," Moore said. "The sooner school districts can commit to major capital construction projects with the certainty of state appropriations and local matching funds, the better."

"Many of our systems really don't have the capability to issue bonds," Elmore said. "This approach is a partnership between county commissions, school boards, and the state of North Carolina, to help education communities secure a piece of funding for vital capital improvement plans."

The House proposal has support from Gov. Roy Cooper, the N.C. School Board Association, and the N.C. Association of Educators.

H.B. 241 will compete with an alternative school construction proposal from the Senate. Senate Bill 5, Building North Carolina's Future, is a pay-as-you-go approach to school construction needs. Instead of presenting voters with a nearly $2 billion statewide bond, S.B. 5 would adjust the State Capital and Infrastructure Fund to include state funding for public schools and community colleges. The Senate proposal would raise annual SCIF spending from 4 percent of General Fund revenue to 4.5 percent.

"The concern I have with a pay-as-you-go plan is ending our state's traditional education model. In North Carolina, counties are responsible for capital construction, with occasional state support," Moore said. "Moving to a permanent reform of our education finance model, I believe, is the wrong approach."

He said the Senate proposal would encumber a substantial percentage of General Fund tax revenue and would reduce spending flexibility. H.B. 241, on the other hand, would take advantage of what Moore says is a competitive bond market.

S.B. 5 has already passed the Senate and is now in the House K-12 Education Committee.
Go Back