Silent Sam Decision Pushed Back until May

People wanting to learn the fate of Silent Sam will have to wait a bit longer. The University of North Carolina Board of Governors has approved an extension of the deadline for board members to devise a plan for the confederate monument.

Originally, a UNC BOG task force on Silent Sam had until March 15 to develop a plan to deal with the Confederate monument that once stood on UNC-Chapel Hill campus. Now, the task force has until May to determine whether Silent Sam will return to campus and whether it will return to its original spot at McCorkle Place.

UNC BOG Chairman Harry Smith told BOG members in an email the extension gives the taskforce more time to do their work.

The task force, consisting of Darrell Allison, Jim Holmes, Wendy Murphy, Anna Nelson, and Bob Rucho, has met only once since it was created during the Dec. 14, 2018 meeting. No notice was given that the task force would meet Feb. 7, a possible violation of the state's open meetings law. 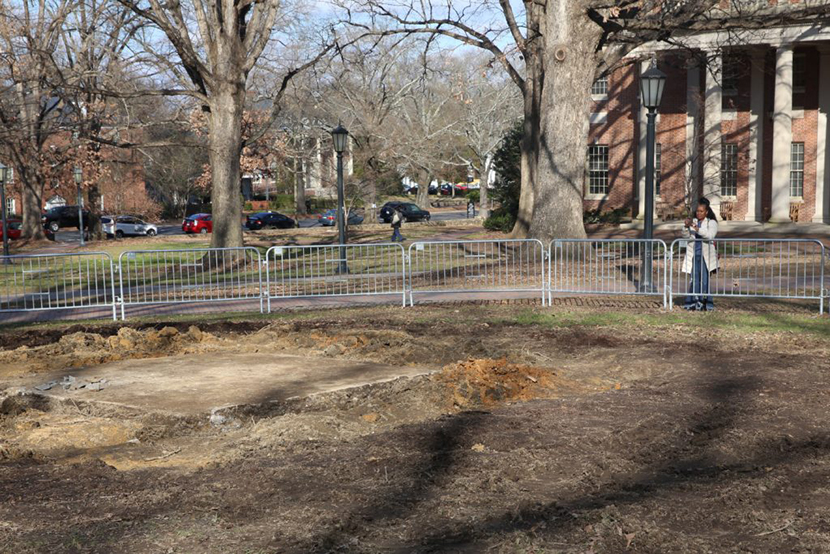 McCorkle Place at UNC Chapel Hill, where the Confederate monument known as Silent Sam stood for more than a century. (CJ photo by Don Carrington)

Holmes told the News & Observer the meeting was informal and lasted no longer than an hour and a half. The meeting, which several Chapel Hill trustee members attended, was intended to set a baseline for determining Silent Sam's fate.

Instead of revealing the plan during the March meeting when the Board of Governors will meet at Appalachian State University, the task force will announce the plan at the board's May meeting in Chapel Hill.

The decision about what to do with Silent Sam has languished for months. Protesters toppled the monument during an Aug. 20, 2018, protest. Since then, the statue has been in storage as university officials determine Silent Sam's fate.

A 2015 state law requires the N.C. Historical Commission to approve relocation of memorials such as Silent Sam away from their home properties. A proposal by UNC Chapel Hill officials to move the statue to a new historical center on the southern part of campus was rejected by the Board of Governors.

UNC Chapel Hill Chancellor Carol Folt resigned abruptly in January, with many citing the uproar over Silent Sam as a big reason she departed.
Go Back