Mark Davis said he is the happiest person in North Carolina after being appointed to a seat on the N.C. Supreme Court. Senate leader Phil Berger, R-Rockingham, is not so pleased.

Davis is a Democratic member of the N.C. Court of Appeals. With his appointment, the Supreme Court now has a 6-1 partisan makeup favoring Democrats instead of the prior 5-2 balance.

Cooper elevated Davis to fill the associate justice seat left vacant Feb. 12 when the governor appointed Cheri Beasley to become chief justice. She succeeded Republican Mark Martin, who left his post at the end of February to become dean of the Regent University law school in Virginia Beach, Virginia.

This is the second time Davis has been appointed to fill a vacancy created by Beasley's promotion. Former Gov. Bev Perdue appointed him to the Appeals Court in 2012 when Beasley was named to the Supreme Court. He took office in 2013. Davis, a Jacksonville native, had been general counsel for Perdue for two years, and a state special deputy attorney general prior to that. He spent 13 years in private practice.

"Right now I'm the most excited human being in the state of North Carolina to be able to join the Supreme Court," Davis said during a news conference at the Executive Mansion, surrounded by his wife and two of this three children. "This is truly the fulfillment of a lifelong dream for me, and I feel like I have been preparing for this moment for my entire professional career." 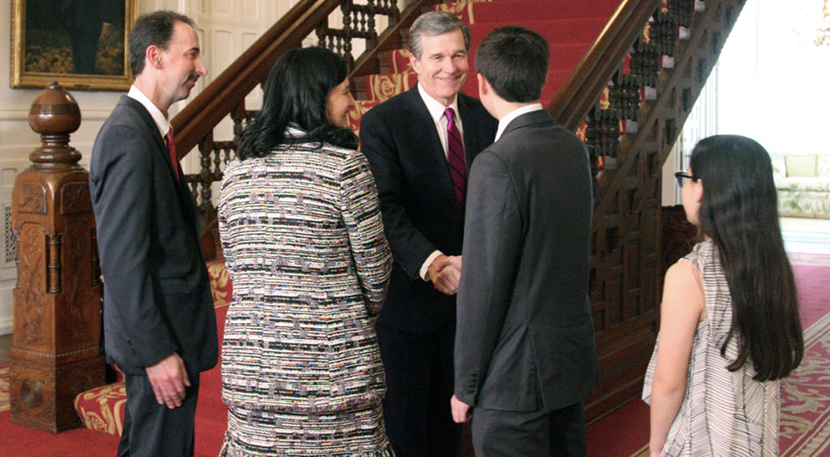 "Judge Davis has excelled in law school, his career, and during his tenure on the Court of Appeals," she said in her post.

But Berger was not so thrilled.

"It seems that Governor Cooper's primary criteria for appointing judges is their political affiliation," Berger said in a press release.

"For years, Governor Cooper has called for a nonpartisan judiciary and partisan balance to government," Berger said. "By expanding the Democratic supermajority on the Supreme Court, he has shown that it was just empty rhetoric. Governor Cooper is the hyper-partisan he has long condemned."

Berger previously criticized Cooper for appointing Beasley as chief justice over Senior Associate Justice Paul Newby, a Republican. Berger and Republican Party officials said it is customary for the senior associate justice to replace a chief justice who leaves office.

Davis said he has tremendous reverence and deep respect for the work of the Supreme Court. He said its role is vital to protect the rights of all North Carolinians, to make sure the state constitution is not violated, and to ensure every case is decided impartially and fairly, based on the facts, and the law.

"People in our state rely on the North Carolina Supreme Court to exemplify the virtues of fairness, equality, and justice for all," Cooper said. Davis has the legal skills, integrity, and commitment to public service to meet that obligation, he said.

Davis' term will run through 2020, when he's eligible to run for a full eight-year term on the court.