Silent Sam should not return to the Chapel Hill campus, the leader of the University of North Carolina System’s Board of Governors says. UNC, board of governors, silent sam statue, campus, may 22, 2019
Home
Categories
Login

UNC Board of Governors Doesn’t Want to Restore Silent Sam 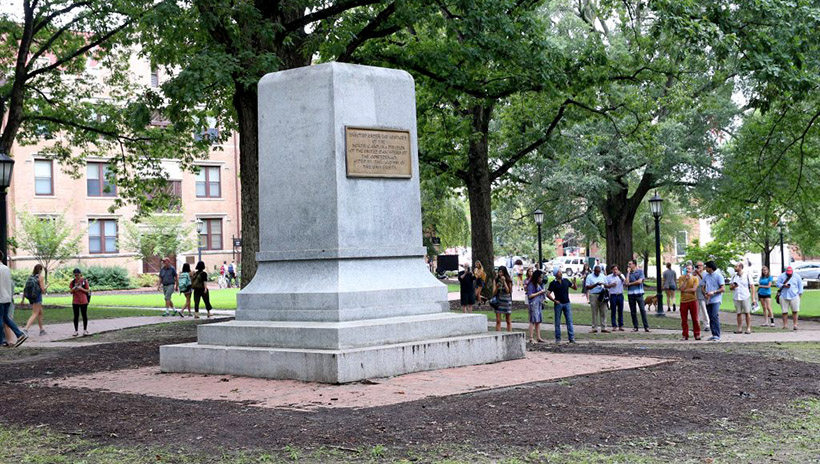 'Silent Sam' no longer stands on his pedestal at the UNC-Chapel Hill campus in this photo taken Aug. 21, 2018. (CJ photo by Don Carrington)

Silent Sam should not return to the Chapel Hill campus, the leader of the University of North Carolina System's Board of Governors says.

Protesters felled the Confederate statue some nine months ago.

Board chairman Harry Smith told reporters Wednesday, May 22, his views and opinions have "evolved greatly," and the board is working hard to "get it right."

The board, to the chagrin of those who want the situation resolved, won't set a deadline. The board announced in a news release May 14 it will again delay a decision about the monument's fate.

It seems as though no one wants to claim authority over the century-old statue. The N.C. Historical Commission, the body responsible for oversight of state monuments, made no ruling about Silent Sam after protesters removed it in August. The BOG called on UNC-Chapel Hill for a recommendation, which led to a proposal for a $5.3-million historical center to house the statue.

The BOG rejected that idea.

Most recently, a five-member UNC BOG task force was charged to deliver a plan for the monument by March 15, but the board extended the deadline to May, leading to yet another delay.

Smith said the task force has been "very deliberate" in trying to determine potential outcomes for Silent Sam. The university system has struggled to find a home for the statue. Former UNC Chapel Hill Chancellor Carol Folt, who left her position earlier this year, announced her resignation abruptly after removing what remained of Silent Sam's pedestal.

For now, the statue is in an undisclosed storage facility.

"There's been a lot of conversations, and those conversations are still ongoing," Smith said. "The goal there is to simply get it right."

Smith said the board doesn't want to rush the process with an arbitrary deadline, but thinks the task force is closing in on a plan.

The board is working with the state legislature, Smith said, though he didn't directly respond to a question about whether legislators may - or should - change the law governing Confederate monuments.

A law passed in 2015 requires the N.C. Historical Commission to approve relocation of any historical markers on monuments on public property. They can be removed temporarily for repair or renovation, or moved to another location on the original property if it has "similar prominence, honor, visibility, availability, and access." But monuments can't be taken down without the commission's backing.

"It is unfortunate that law authorities in Chapel Hill appear to be unable to uphold the law," Yarborough said.