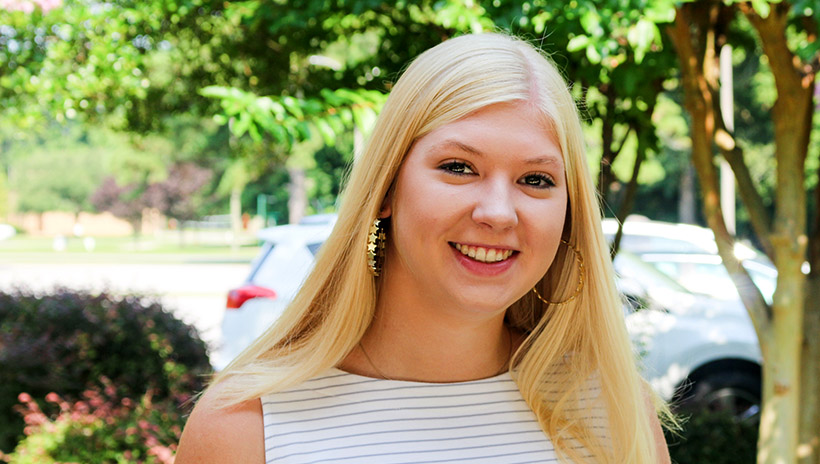 Madison Bunting was one of eight Gamma Beta Phi scholarship recipients nationwide. She graduated from BCCC and starts at UNC-Chapel Hill this fall.

"I was part of [Gamma Beta Phi] my first year here, and I loved it," she says. "When they were looking for leaders the next year, I thought secretary would be a good fit for me. I had a busy schedule, but I thought that I would have time for it. I could show others that it's not hard to do. I got a lot of my friends to join." Before attending BCCC, she was involved in student organizations at Washington High School, including Future Business Leaders of America and served as secretary of the Student Government Association.

"My aspirations for public service have finally translated into action and I am making changes in my life, my community and my college," wrote Bunting in her essay for the scholarship. She helped lead an effort in 2018 to raise funds for the Zion Men's Shelter and Kitchen. The shelter was severely damaged after Hurricane Florence brought record flooding to Washington, inundating the building. The shelter lost all its appliances and needed to be fully renovated due to the storm's destruction.

When they first agreed to raise the funds for Zion Shelter, Bunting toured the damaged site with other GBP officers. "I was shocked. It was crazy to think how blessed we are and how people out there are in this condition. I was shocked by the damage. I saw that they really needed our help."

To raise the funds, the group held a walk-a-thon and sold chili and hot chocolate to students and employees on campus. When she heard of the group's previous fundraiser, she did not think it would be possible to match it.

"How in the world are we going to be able to do this," she thought, "but by the end of it­-it was hard work­-the little we did made such a big difference, and we were able to raise so much for them."

Bunting joined the Study Abroad team from BCCC on its trip to Costa Rica this summer. She saw the condition of the housing people lived in, and the extensive farm work they carried out, but also their perseverance through those situations. "It just amazed me. I don't know if I could do it. For them to be able to do that, they were so content. I thought, 'Wow, they're doing it. They're doing well, for what they have.'"

The experience in Costa Rica and her time with GBP has deepened her commitment to making a difference as a pharmacist. She saw the impact she could have on people's lives when she worked as a clerk at Tayloe's Hospital Pharmacy. She plans to get involved with a service organization at UNC-Chapel Hill, and, in the spirit of her recent leadership recognition, if there is not a group that speaks to her, she plans to start her own.

Encouraging other students to get involved, Bunting says, "Give it a chance. I did not think I had the time, because I'm so busy with work and school, but you will make time, and time will fit in. Right after class, there's a meeting. You can make it and put in your thoughts and make the biggest difference in 30 minutes."

BCCC's Gamma Beta Phi chapter was one of only six chapters nationwide to be recognized this year as an Exemplary Chapter. BCCC thanks Madison Bunting for her commitment to her community and wishes her the best on her future endeavors.