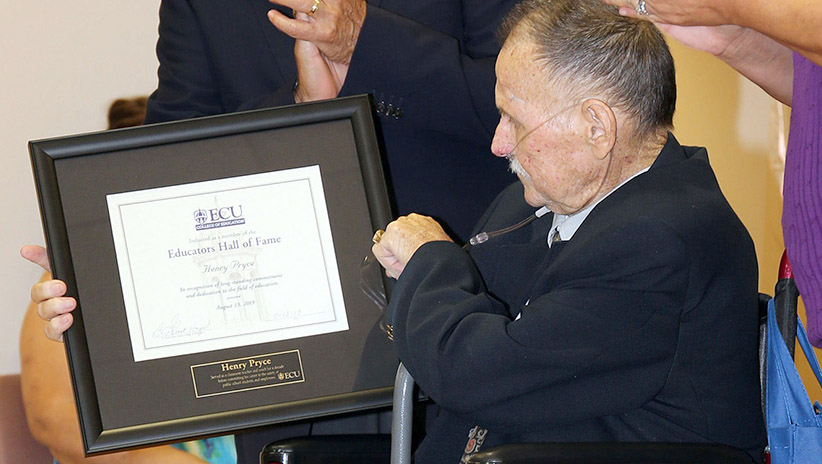 Publisher's note: The author of this post, Kristen Martin, is a contributor to ECU News Services. 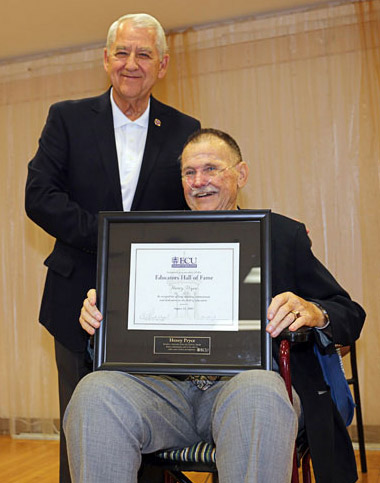 After receiving a letter about the award, Pryce shared the news with his medical care team at Well Care Hospice in Advance.

Kelby Hankins, Pryce's social worker and an ECU graduate, contacted the College of Education after she saw the ceremony would be in November. She hoped there would be an alternate induction date or ceremony in order to honor Pryce, who was terminally ill.

"He is a lifelong educator and we would like to be able to celebrate this achievement," Hankins said.

Terah Archie, director of community relations and outreach for the College of Education, worked closely with Hankins and Dr. Jerry McGee, who nominated Pryce for the honor, to organize a special ceremony in Davie County. It was the first time the college had an induction ceremony for an individual off campus.

"I know that he is a proud Pirate and I can't wait to show him that East Carolina University will never forget their fellow Pirate and to let him experience again the indescribable culture and pride of Pirate Nation," Hankins said after a new date was set for the ceremony.

McGee, a 1965 graduate of ECU and president emeritus of Wingate University, spoke about his history with Pryce, from growing up in Rockingham to being members of their high school's Glee Club and becoming roommates at ECU. 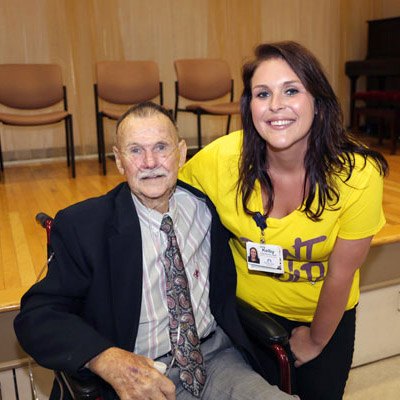 Henry Pryce with his medical social worker Kelby Hankins.
"We had a wonderful year together and developed a bond that has lasted really forever," McGee said.

After telling stories about their lifelong friendship, McGee shared his reason for nominating Pryce for the award. "Certainly, with the record of achievement Henry has as a classroom teacher, as a coach, and later helping keep our students safe, he certainly deserves the recognition that our dear alma mater is placing on him today," Mc Gee said. "I will say this in closing: that if there was a Hall of Fame for friends, Henry would be a member."

Pryce's plaque reads, "Served as a classroom teacher and coach for a decade before committing his career to the safety of public school students and employees."

Pryce graduated from ECU in 1966 with a bachelor's degree in geography. He was a classroom teacher and coach for a decade in Davie County before working to develop training standards for school bus drivers, driver education instructors and commercial driving schools. His passion for driver education led him to serve as president of North Carolina's Passenger Safety Program.

During the ceremony, Hankins' role in organizing the ceremony wasn't forgotten. Hankins, who earned a bachelor's of social work in 2011, joined Pryce on stage. But Hankins wasn't the only Well Care employee at the ceremony to support Pryce. Several employees showed up sporting purple and gold with fond words for Pryce.

"I can tell you, after 23 years of working in hospice, this is the biggest thing I've ever been involved in," said Diane Merritt, the director of hospice operations with Well Care.

The day after the ceremony, the College of Education learned that Pryce had died. Reflecting on the special ceremony, McGee said, "There are no words. We did a great thing yesterday."

For more information on the Educators Hall of Fame, visit http://coeweb.ecu.edu/hf/about/.
Go Back