ECU Professor Provides Some Answers | Beaufort County Now | This week, the U.S House of Representatives began an impeachment inquiry of President Donald Trump regarding a July 25 phone call between him and Ukrainian President Volodymyr Zelensky. 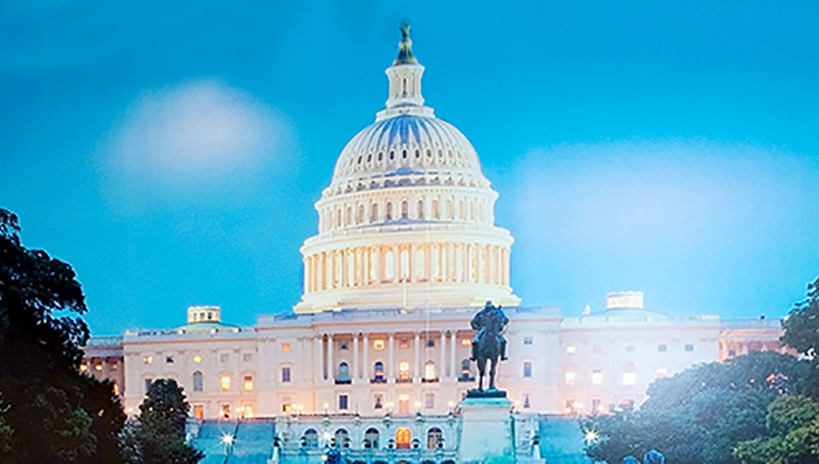 A mural of the U.S. Capitol building is displayed on a wall of the John Laliotes Political Science Library in the Brewster Building at ECU. | Photo: Cliff Hollis

This week, the U.S House of Representatives began an impeachment inquiry of President Donald Trump regarding a July 25 phone call between him and Ukrainian President Volodymyr Zelensky. A transcript of the call shows the president requested the help of the Ukrainian government in investigating the son of former Vice President Joe Biden, who's running for the Democratic nomination for president, and his work for a Ukrainian energy company.

Impeachment is the constitutional process accusing an elected official of a crime in an attempt to remove the official from office, according to the Associated Press.

Hugh M. Lee, a faculty member in the Department of Political Science and Department of Bioethics and Interdisciplinary Studies at ECU, addressed some questions about impeachment. Lee holds a law degree from the Florida State University College of Law.


What is an impeachable offense?

An impeachable offense is bribery, treason or a high crime or misdemeanor by definition in the Constitution. That definition hasn't really been defined. It means whatever the House feels that it means. It's an interesting kind of anomaly in the law because it's a standardless offense. We don't have any standards to decide if someone is guilty of an impeachable offense. It's up to the conscience of the Senate, essentially.


How does impeachment work?


What is the process?


What is the House looking at now?

The question being asked right now is whether or not President Trump's contact with the Ukraine government to solicit help investigating a member of Vice President Biden's family constitutes some kind of impeachable offense. We don't have very many good historical examples of what a high crime or misdemeanor is or whether or not a communication like this would constitute treason, so this would be a novel case.

We've had a lot of speculation about impeachment since President Trump took office, whether that impeachment would be based on the Emoluments Clause, which prohibits presidents from receiving money or other gifts from foreign governments, or whether that would be based upon the conduct of the Mueller investigation and whether the president obstructed justice in that particular instance. To date, no one has referred articles of impeachment or actually begun a formal impeachment process short of what the House is doing in regard to an investigation.


What happens if impeachment makes it to the Senate, and the Senate does not convict?

It means the president is not guilty. It can be there was not sufficient evidence to convict. You could lose in the Senate but not be removed from office because they didn't have the sufficient two-thirds majority. What scholars essentially say is impeachment is not a criminal trial in the sense that you're not punished, you can't be fined; there is no sentence or punishment except you lose office. Therefore, since it's not a criminal trial, it serves a different purpose, and that purpose is to remove people from office who are corrupt or are treasonous or who have committed a crime. And so the question in this case is do you think these statements are sufficiently serious to call into question the fitness of the president to be in office.


What are the risks of impeachment to both political parties?

If you're a Democrat and you're looking at the possibility of impeachment, there's kind of this "you better be sure" issue you have. Because if you overreach, if you try to drum up a charge the people don't really believe is reflective on the president's fitness to serve, then it looks like a witchhunt, then it looks like a use of political power to try and remove a president from office who didn't do anything wrong.

But if you're the Republicans and if you circle the wagons and decide you're going to defend too strongly against an impeachment charge that has legs, that actually has public support, that has political support, that is likely to pass the House, and you're going to stake your hopes on the ability to defend President Trump against these allegations and you lose, the political consequences could be significant for you. Now you look like you're complicit in a process of trying to rig the electoral system by engaging foreign governments to dig up dirt and provide information that would prejudice the electoral process.

So I think there are risks to both parties in the process, and I think that's why the Democrats have been hesitant to move forward on some of their claims of impeachment. They are worried that there's not enough popular support, political support, for articles of impeachment for a president whom at least among a certain percentage of the electorate is very, very popular.


How many officials have been impeached?


What else do we need to know?