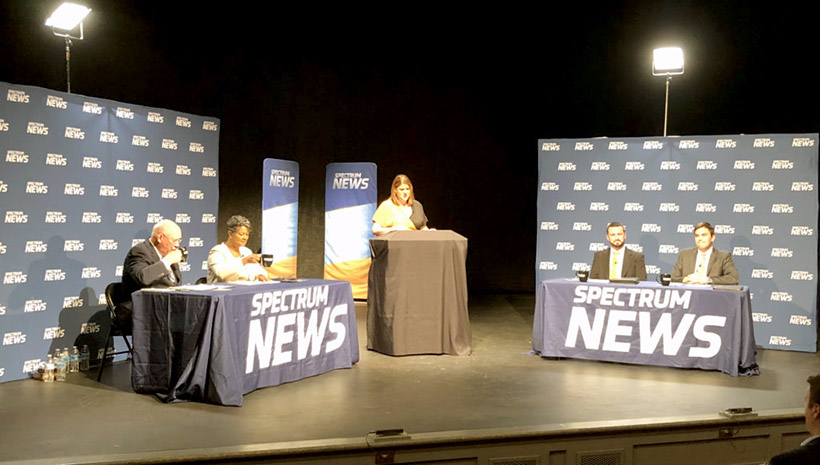 Partisanship often dominates contemporary political dialogue, but it's possible for Republicans and Democrats to find at least some common ground.

A panel of thought leaders met Tuesday, Oct. 1, in Salisbury's Norvell Theatre for the second of four events in the Hometown Debates Series.

"What people really care about at the end of the day is, can they get the care they need?" said Riley.

"The individual market in North Carolina has lost over 100,000 people from 2016 to 2019," he said. "We see it, year after year, that we're reducing down the number of people in the individual market ... and we really need to question whether that's the most efficient way to do this."

Prices on prescription drugs are rising, too.

"We've got to look at drug cost and look at the cost, period, of health care," Cunningham said.

Cunningham and Brawley agreed on strategies to encourage the use of generic brand drugs and on promoting preventative care.

"[T]hese two [Brawley and Cunningham] are going to agree with everything over here, but we'll move over to this side. ... She gestured toward Riley and Roberts, seated across the stage.

"The funding is really going to be a problem ... it is the fastest growing part of the federal government," said Brawley. "[Medicaid] is the second largest part of the state budget - greater than universities and early childhood education. If we end up with a fully expanded Medicaid and block grant, which is 65% of Medicaid funding, Medicaid will become the largest item in our budget, overpowering education."

A block grant is a set amount of earmarked funding, bestowed to the states by the federal government. Any additional funding must be provided at the state level.

The thought leaders also discussed Senate Bill 86, the Small Businesses Healthcare Act. The measure, which became law without the governor's signature, allows small businesses to band together under trade associations and to bargain with health insurers as larger employers.

Brawley and Roberts supported the bill. Cunningham didn't. Riley, for his part, said he was dissatisfied with the legislation.

"Fundamentally, when it comes to affordability, we need to talk not just about premiums, but about the total cost of care that people are facing," said Riley. "And that means more robust coverage, not these bare bones policies that we're seeing come forward with Association Health Plans."

Roberts disagreed. "For one, I would like to see the state in complete control of the insurance market, to make it as personalized to the citizens of North Carolina as possible."

Panelists, agreeing again, said the myriad problems with health care in North Carolina have no quick or easy solutions. But bipartisan dialogue is the best way forward.

"The cost of health care is very obscure. You very rarely know what it's going to cost, or even what it costs when you get all the bills," said Brawley. "I don't think it's a choice between cost or availability or accessibility. ... It's a balance; it's going to take a lot of fine tuning. It's not one thing. It's not 10 things. It's probably 50."

An edited version of the debate will be broadcast statewide 11:30 a.m. Sunday, Oct. 6, on Spectrum News. The full-length debate will be available online at spectrumlocalnews.com.

Since 2016, the IOPL Hometown Debates Series has featured state legislators and policy experts discussing issues of state public policy. Previous topics have included constitutional amendments and education. The two remaining health care policy debates of the 2019 series are as follows:


All debates are open to the public.