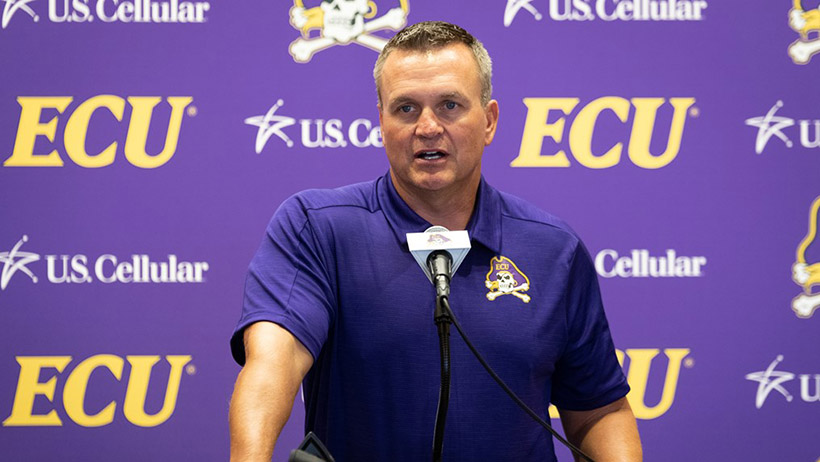 Opening Statement:     "Excited to be back at it this week. Probably the only negative of the bye week when it came was just how our team was playing and trending. We had an excellent bye week. I thought the players, I could not have asked them to be better mentally and have better effort. Very energetic practices and I thought we accomplished a lot last week. We came back on Sunday and had a very energetic Sunday practice, a very solid Sunday practice. They're excited for this week. That was the thing when I met with the leadership council on Sunday night. You never know what you're going to get in those meetings because you're always discussing anything from the menu for the Friday night meal to what's going on in the locker room or whatever. I said, any issues going on or anything? D'Ante (Smith) just looked at me and said, 'we're excited coach.' I think that's the general theme of the roster right now. We're glad to be back playing. Excited about this weekend. Great opportunity here with a big matchup up in Connecticut. A very good UConn football team. It's going to be a great game on Saturday. I know they'll be excited as well. We can't wait to get up there and get another chance to compete. Just looking forward to kickoff at 12 noon on Saturday."

On The Status Of Darius Pinnix, Jr. And Cortez Herrin:     "I think they're continuing to progress along and we'll see as the week goes along."

On Who Makes Up The Leadership Council:     "It's a group that I had the team select back in January. I had each position group select a representative. We meet once a week and we discuss a lot of things. I told them, it's really about servant leadership. They're serving the team from a standpoint where they're a conduit between the coaching staff, including myself, and the players. It was very, very helpful, especially throughout the spring and summer, as they brought up a lot of issues that were not visible to me on the surface. Some behind the scenes things that affected them from food in the players' lounge to different things they run into with operations around campus or parking. It could be anything. Once we got into the week-to-week stuff, it's a lot of how was everything with the hotel stay or travel or stuff like that. Me relaying, hey this is a big week and we need to be conscientious of this. Or it could be, we need to stay on top of the freshmen and making sure they're going to class. We discuss a lot of stuff in there. I've been pleased with that group from a standpoint that I think they've brought some really mature conversations to the meeting each week. Big John (Williams) is a big part of the meeting with me. It's really been a positive for us so I really appreciate that group a lot."

On How Important It Is To Get The Fourth Win:     "Well, you can't do anything until you get the fourth. That's kind of been our deal the past couple of weeks. I think it's an important deal for our kids. If you ask those guys how important it is, they'll tell you. It's a big deal for us."

On How Important It Is To Finish The Season Strong:     "I think this weekend's game with UConn is just like every game we've played this year. It's the biggest game of the year to us. It's the only one we've got this week. Our preparation's will be just like they have been and I think our kids have done a great job of embracing that one game at a time, one play at a time attitude. If you can ever get your team to focus that intently, consistently together, then you start seeing better results. But you can't get caught up in anything else except what's right in front of you."

On How Long The Season Has Felt:     "I think for me, it's kind of flown by. We've just had so much to accomplish. Even though the opener with NC State seems like so long ago, the summer feels like yesterday. Just with year one, a lot of seasons are like this, we just had so much we wanted to accomplish and that we wanted to do, that you just put your head down and go to work. Every day is a little bit like Groundhog Day to a degree because in this profession, every day you just go, go, go, go. Then even more with the early Signing Day, the recruiting is so intense this time of year that it makes it fly by because there's not a whole lot of downtime."

On Whether The Offense Will Again Rely On Passing:     "In just like the last game versus SMU, the game plan going is to run our offense and run it effectively. When you look at the last game, I thought we did a much better job of running the football. There's lots of stuff at the line of scrimmage that's really dictated by what you're seeing on the other side of the ball. I think certainly our offense has been running more efficiently because we've been making better decisions pre-snap and executing better post-snap the last couple of weeks."

On The Success Of Jake Verity:     "I do think that we all come to expect great performances from him and I think he expects it from himself. I said it last spring, I think he's the best kicker I've ever had. I thought that as soon as I saw him kick live because he has that pop coming off his foot. The ball gets up quick, he has excellent accuracy and nothing really rattles him. He's had a really solid season, I'm glad he's here with us and I'm glad he has another year."

On What He Sees In UConn's Offense:     "We talked about this last night in the coaches' office. If you just flip on the film, watch them and don't worry about anything else other than the film, you look and it's a really good football team. I think offensively, the thing that stands out is a big, strong offensive line. (Kevin) Mensah is on his way to 1,000 yards rushing this year. The backup, (Art) Tompkins, has been a good changeup and has been very productive. (Cameron) Ross, the freshman wideout, is very dynamic. They do a lot of things to get him the ball a lot of different ways. They've played three different quarterbacks: No. 12 (Mike Beaudry) the fifth-year senior, started early in the year, No. 11 (Jack Zergiotis) the true freshman from Canada, has played a lot and then No. 4 (Steve Krajewski) the redshirt freshman, he had the big game against UCF then got injured. I think whoever's under center is playing well, they can really give you problems and they're a good offensive football team. I think we're really going to have to do a good job of tackling to slow down the running back and I would expect all three quarterbacks to be healthy this week, which means we've got to be ready to defend a very good offense."

On Whether He Expects To Get UConn's Best Shot:     "I think we're going to get their best shot because it's the next game for them. I think both of us are looking at it as a big game for our programs. We both are hungry for that win this Saturday. I don't know how much all of that other stuff has to do with it. I think they just want to win on Saturday. You look at their scores throughout the year, particularly at home. Navy is the one outlier, but Navy's done that to a lot of people, including us. They've had tight ballgames at home. One score game against Illinois, one score game against Houston and obviously the win earlier in the year. I feel like they're much improved over last year because it's the same guys, just a year older. I think they've got good personnel. It's what I was saying last night when Coach (Sonny) Dykes and I talked down at SMU, everybody in this league is good and you better be ready to play on gameday. If you're not ready to play, you're going to get beat. So, it's going to be an exciting game on Saturday."

On How The Cold Will Affect The Team:     "I noticed it's 47 degrees and a rainy drizzle right now here. That'll probably be what it'll be for practice this afternoon, which will be warm compare to what it has been. So, we have had those kind of practices to prepare in. I think wherever you look across the country, teams that can play well late in the year when the conditions may not be ideal, those are the teams that win championships. It's one of our goals to develop teams that do this. I can reference so many games over our career. We've had some brutal weather for games before that our teams really thrived in. That's the reason we've had some of the success late in the year that we've had and it's something that we want to establish here. I'm excited for Saturday. I think the players are excited too. They've been very spirited during these practices and we've talked about it quite a bit. At the end of the day, you're not talking about extreme temperatures on Saturday. You're talking about temperatures in the 40's and cloudy - that's this time of year."