Pirates Rally Then Hold off EKU for Victory 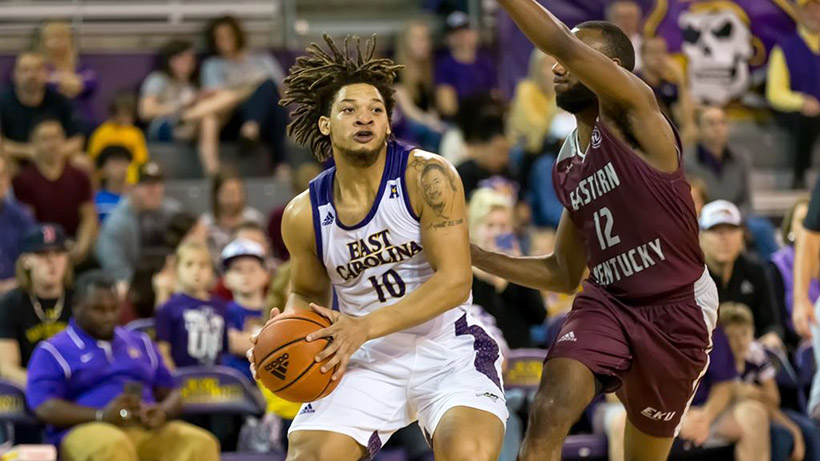 J.J. Miles followed with a 3-pointer and Gardner scored inside again before Robinson-White added a free throw to cap the run.

Gardner put in a layup off his own miss and the Pirates extended it to 60-51. The Colonels used a 12-5 spurt and closed to 65-63 on a 3 from Taylor but couldn't get closer as ECU reeled off nine straight points to take control.

ECU Head Coach Joe Dooley     Opening Statement     "Give credit to Eastern, you know they put us on our heels the first half, you know we've seen some pressure but not hard pressure, they really had us a little discombobulated. I thought the guys did a good job in the second half, after we got our bearings of being a little more aggressive and not turning it over as many times until the last couple of minutes. Played a lot better, I think a lot of it was a contribute to the fact that we got stops, at one point we had 11 straight, so I thought that allowed us to get out and run and make some easy plays and we need to handle things at the end of the game a lot better. We ended the end of the game horrifically."

On Baruti's play tonight     "Bitumba played his best game since he's been here... but I did think he was very active, I thought that he chased the ball, he had nine rebounds in the second half and I thought he played with a lot of confidence. You look at his plus-minus from tonight and he was terrific."

On winning four in a row     "We talk to our guys we need to make this an expectation. That's building things over the course of time. And not taking winning for granted either. It's not easy. But I do think a little bit of confidence with four in a row, and eight of nine at home after the Wichita game, you're getting a little bit of a familiarity of things."

Junior Tyrie Jackson     On watching the team's evolution and improvement     "We are really clicking as a team and coming together as one. Every day we're trying to focus on getting better at everything and coming together, and I feel like the guys around have really recognized where we're at in the season and how important it is to win, and how important it is to be locked in every day in practice."