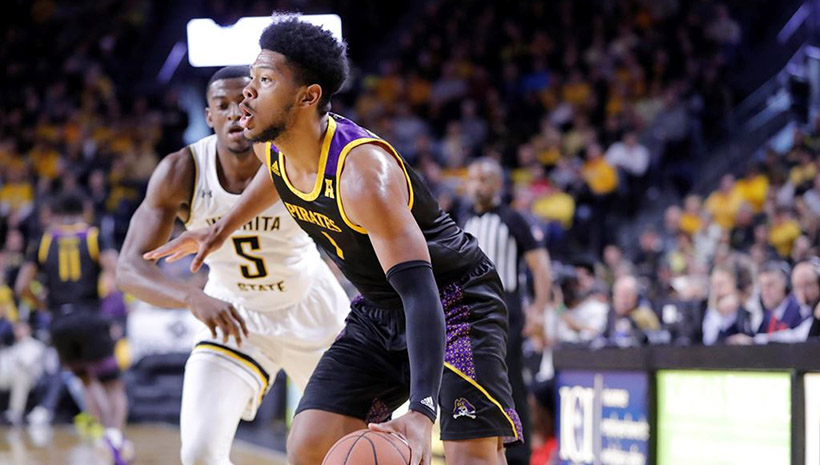 Gardner, who entered the game leading the American in scoring at 20.7 points a game, was 12 of 20 from the floor and had a game-high 10 rebounds.

"His 15-footer is almost automatic," Marshall said. "He was able to get it a little more than we wanted."

Jamarius Burton had 15 points for Wichita State while Tyson Etienne and Trey Wade added 11 each for the Shockers.

Wichita State shot out to a 9-0 lead, and East Carolina coach Joe Dooley admitted his team "got frazzled."

But Gardner was not going to let them get blown out.

"It's fun to play in an atmosphere like this," Gardner said. "Once guys got adjusted to it, we settled down and played well."

The Pirates came all the way back to take a 45-44 lead on Bitumba Baruti's jumper in the lane with 12:46 remaining.

"I thought we weren't playing aggressively enough," Marshall said. "That's one of the reasons they could keep scoring."

Stevenson scored seven points over the next three minutes to push Wichita State back ahead 53-47.

"We have a lot of veteran guards," Stevenson said, "and I think that helps us from getting too down about losing the lead, especially at home. We know we can turn that momentum around."

East Carolina had two final-minute possessions down four or less that resulted in a turnover and a blocked shot, helping Wichita State seal the win.

The Pirates return to action Tuesday, Jan. 7, at home against South Florida.

ECU Head Coach Joe Dooley     On the fight his team displayed     "You're playing a really good team on the road and I thought we did a lot of good things. We've got a lot of new guys, so to come in this environment and get down like we did and fight back, I thought they responded in a really good way. I'm proud of the way they responded."

"We made some ill-timed turnovers both in the first and second half. I thought we got a little sped up and took some bad shots. It wasn't lack of effort. We've got to get where we're a little more patient offensively. I thought we played hard and competed. But we've just got to clean up some things."

On Jayden Gardner     "Jayden was spectacular. It shows how much he's worked on his face up game. He wasn't around the basket as much. He had a couple of good finishes at the basket. He made some mid-range gains and he drove the ball good which were a couple of big plays."

ECU Forward Jayden Gardner     On his performance     "In the offseason I worked a lot on my all-around game and being able to face up. I think my ability to face up (Wednesday) really helped me. I didn't really attack the basket that much. They were sagging off on me, so I was able to hit some jump shots."