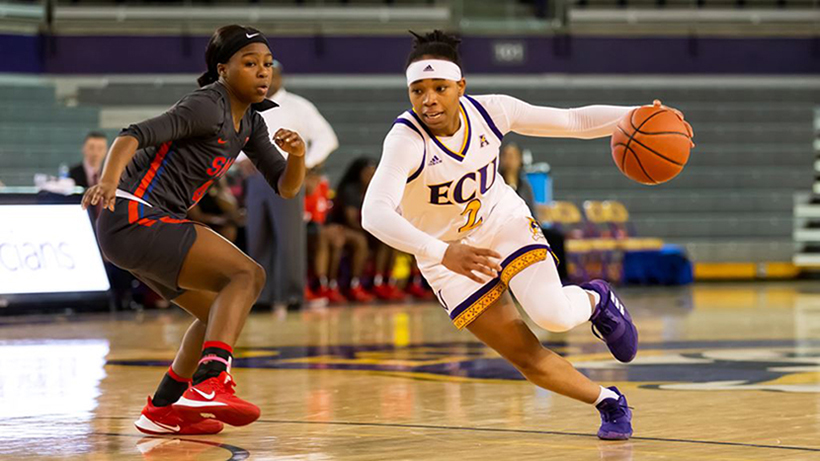 ECU (3-12, 0-2 AAC) was led in scoring for the second straight game by Lashonda Monk, with the junior guard finishing with 23 points and a team-high eight rebounds. She also set a new career-high with two blocks to go with four steals.

SMU (7-7, 1-1 AAC) saw Kayla White score a team-high 18 points, as White shot 7-of-10 from the field and 2-of-3 from beyond the arc. JaQuia White and Johnasia Cash each had nine points while Cash had eight rebounds.

In a pattern that repeated throughout the game, the first quarter started with SMU scoring 11 of the game's first 15 points, including seven by JaQuia White. Monk was the only Pirate who could score early, scoring the first four points for ECU. The Pirates offense finally began to show some life when Taniyah Thompson hit a pair of jumpers while Dominique Claytor and Tiara Chambers each made layups as part of an 8-4 ECU run to end the quarter, making it 15-12 at the end of one.

Neither team could get much offense going in the second quarter. After a Chambers layup to open the frame, ECU went scoreless for nearly seven minutes. On the other end, Kayla White was the only Mustang who could find any offense, as she rattled off a 6-0 run by herself. ECU finally snapped its scoreless streak with a Monk triple from the left wing. That seemed to momentarily take the lid off the rim as Xianna Josephs scored in the post and then a Katerina Tsineke steal led to a Monk layup, tying the score at 21. Unfortunately for the Pirates, the run stopped there as White hit a jumper out of an SMU timeout. That jumper was the difference at the half, as the Mustangs led 23-21.

SMU opened the second half on a 9-2 run to take a 32-23 lead, the largest of the game. ECU answered with a 6-2 run of its own, powered by four points from Monk. But White ended any momentum ECU had by hitting a three as the shot clock wound down. At the end of the third, ECU trailed 38-31.

After a jumper from Monk opened the fourth quarter, the Mustangs went on a 7-0 run to take a 45-33 lead with 6:08 remaining. The Pirates had one more run in them. ECU went to the press and that created layup opportunities, as Necole Hope, Josephs, Monk and Thompson all got to the rim. When Monk cashed in her second three-pointer of the game, the SMU lead had been cut to just four (51-47) with 1:13 left in the game.

The Pirates never got any closer and an SMU layup along with a pair of free throws allowed the Mustangs close out the contest and take the victory.

ECU will be back home for a second straight game when the Pirates host Wichita State on Sunday afternoon. Tip-off is scheduled for 1 p.m., in Minges Coliseum.

ECU Head Coach Kim McNeill     Opening Statement:     "Hard fought game. Credit to SMU, they stayed the course, they were able to hold off our run right there at the end of the game. I thought we played well in spurts, I thought we showed who we are going to be in spurts. We talked in the locker room, those spurts weren't long enough, we're not able to sustain it. We can go at it for about one minute to a minute and a half and then we just lose it. With this team, we're still fighting. We're very young, so you got some kids getting some valuable minutes early that probably if we had a full roster, wouldn't be playing as much. But they're fighting. We're coming to practice every day trying to get better, not holding our heads down, not focusing on the past because we can't control the past all we can control is what's ahead of us. Like I said, I thought we showed fight in spurts, but we've got to be more consistent, we've got to be able to show that fight a little bit longer."

On the pressure on Monk to be the only double-digit scorer:     "That was one thing I said in the locker room, we're not going to win that game to turn our season around with one person scoring in double figures. We put a lot on her shoulders, but somebody has to step up and help her. That's not how I want my program to be built. I don't want one person averaging 22 points and the next person averaging six. You don't win too many games like that. So, we've talked about other people stepping up and hitting some shots and right now it's not even outside shots, it's layups. I thought tonight there were missed layups in key times when we're trying to make a run and missing a layup can be deflating, especially when they are wide open. Often times, that turns into a layup for the other team. We've been working on it, I know it doesn't look like it, but we have. We start practice off every 15 minutes with just simple lay-up drills, simple box out, put back drills with contact. We're working, we're fighters. We're going to come to practice Friday, we're going to get after it again, we're going to bring energy. Eventually it has to click, we just have to focus on getting better and hopefully one day it'll start clicking."

On experimenting with different lineup combinations:     "We did it tonight, four freshmen and a junior. We're trying to light a fire under some people to get that fight back, get that passion back, to get back in that lineup and get their minutes back. If you look, we're playing eight kids, that's all we got because of injuries and four of them are freshmen. If you look at us now, Monk is the only one returning that scored last year, which was only 11 or 12 points. So, we're returning about 12 points from last year's team. We're extremely young and when you have a young team you tend to go up and down. These freshmen, this is their first time experiencing conference play and in conference play everybody is coming for your head. They're not going to take it light on you, so they're experiencing something that's very different. I feel like Monk is doing a good job of being vocal, being a leader, and bringing it in practice and trying to keep the competitiveness with us in practice."

ECU Junior Guard Lashonda Monk     On her mindset in the fourth quarter     "I think I'm just a competitor. I want to win, my coaches believe in me, my teammates believe in me so they believe that I could possibly hit shots that could get us back in the game, so my mindset was to just do what they ask of me."

On being a leader     "Yes, I remember when I was a freshman starting with upperclassmen, I was the quiet one on the court. They had to tell me everything, just lifting me up because I thought I was a freshman so I wasn't supposed to say much. So I think I should be a leader to them because like I was, they're really quiet so they're looking up to me."