Will It Take a Lawsuit to Fix North Carolina’s Broken ABC System? 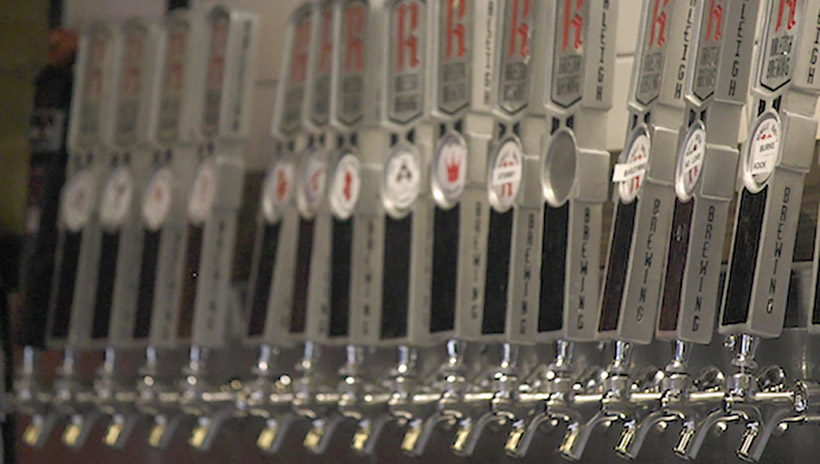 NoDa Brewing Co., which collects awards like a brewer collects hops, continues to grow. The Charlotte brewery announced last week plans to distribute its beer throughout the Triangle.

The easing of N.C. distribution rules now allows NoDa to distribute more of its own beer, and that's key.

A heavyweight in the Charlotte market - including a pair of city tap rooms - owners Suzie and Todd Ford had limited distribution mostly to Mecklenburg County, as did Olde Mecklenburg Brewery, another relative giant that also recently expanded distribution to include the Triangle.

North Carolina, the biggest brewer in the Southeast, has more than 300 breweries, all seeking a niche in their respective markets. Bond Brothers Beer Co. in Cary and Raleigh Brewing Co. have opened tap rooms at Raleigh-Durham International Airport, for example. NoDa also has a tap room at Charlotte Douglas International Airport. A slew of new breweries will open in North Carolina this year, thanks to changes in state laws designed to nurture innovation and entrepreneurship, dating in 2005 to Pop the Cap, raising alcohol limits on beer beyond 6%.

NoDa and Olde Meck, in particular, long wanted to expand, of course, but a draconian N.C. law placed a limit on production, forcing brewers who produced more than 25,000 barrels of beer each year to contract with a distributor.

Lawmakers made some noise over the years - Rep. Chuck McGrady, R-Henderson, being the loudest - to raise the cap, thus allowing brewers to keep control of their products.

The powerful wholesalers' lobby thwarted those efforts. Every time.

Enough already, said the brewers, particularly NoDa; The Olde Mecklenburg Brewery, also in Charlotte; and Craft Freedom, a group formed, at least in part, to fight the distribution laws. Their lawyers argued the law amounts to economic protectionism and interferes with the plaintiffs' constitutional right to earn a living, which the N.C. Supreme Court has called inalienable.

Gov. Roy Cooper on May 30 signed into law House Bill 363, the Craft Beer Distribution and Modernization Act, the result of a compromise among mid-sized craft brewers and the N.C. Beer and Wine Wholesalers Association.

That new law kept the three-tier system - producers, wholesalers, and retailers - but added a mid-level classification of brewers, who can now self-distribute 50,000 barrels of their products, as opposed to the current 25,000. The legislation also gives growing brewers more flexibility in choosing where and how to distribute their beers around the state.

Breweries that exceed 50,000 would not lose the ability to self-distribute, although the new law affects only those breweries that sell fewer than 100,000 barrels of beer per year. Before, if a brewer sold 25,001 barrels per year, by state law, every barrel produced - including the first - would have to go through a third-party wholesaler/distributor.

"Anyone familiar with the political dynamics of alcohol distribution in North Carolina knows that what has been accomplished is no easy task," NoDa co-founder Suzie Ford said before Cooper signed the bill into law.

In the end, it took a lawsuit.

It may, in fact, take a lawsuit to fix the arcane way North Carolina regulates, stores, distributes, manages, and sells liquor. It's way past time to privatize the monopolistic N.C. Alcoholic Beverage Control Commission system.

Some 80 years past time, really.

McGrady introduced a bill last year toward the goal. It got a hearing, but the move was more courtesy to a respected and retiring lawmaker than a substantive debate to fix a broken system that strangles the free market and sends connoisseurs and collectors south, north, and west of our borders.

From the view of N.C. distillers, the brewers' lawsuit didn't go unnoticed. Sure, state lawmakers have relaxed the rules on distilleries, making it easier for them to sell their own products. Yet the ancient system remains, primarily because of the money it funnels into local governments. My colleague Jon Sanders expounds on that point in a series of blog posts.

Some N.C. distillers - and interested lawyers - have quietly rumbled about a lawsuit to force change. Those rumblings will become more audible if lawmakers continue sitting on their hands. The issue isn't going away.

North Carolina is one of the fast-growing states, as people from places with liberal spirits laws move here each day. They expect convenience, they expect to buy liquor on Sunday, and they want a plethora of options. They'll find none of those in North Carolina. And they'll demand change.