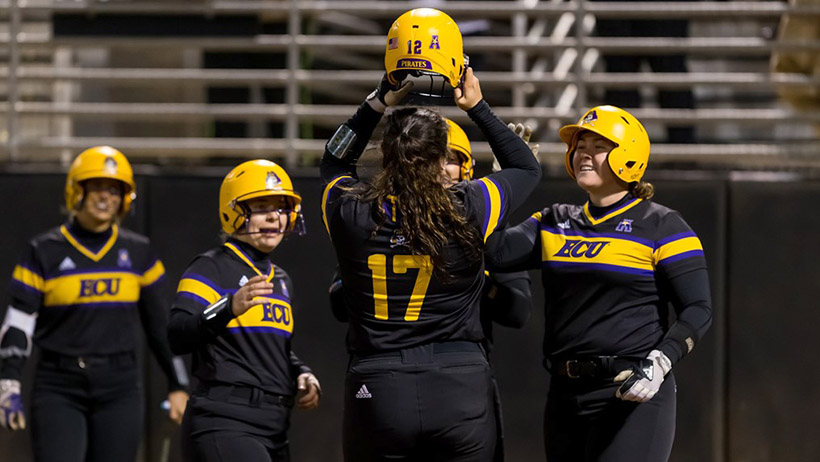 GREENVILLE, N.C. — With a weekend of competition under its belt, the East Carolina softball team opens its home schedule welcoming DePaul, George Washington and Hampton to the ECU Softball Stadium for the 2020 Pirate Clash.

During the 10-day event, East Carolina will face off against Hampton once while battling both DePaul and George Washington twice.

Junior infielder and NC State transfer Chandley Garner paced East Carolina at the plate, batting .400 (6-for-15) with three runs scored, a double, a home run and four RBI as well as a .667 slugging percentage and .471 on base percentage for a 1.138 OPS. The Pirates had five batters hit at least .313 in Garner, junior infielder Ashleigh Inae (.385), sophomore infielder Bailey Ledvina (.364), redshirt senior utility Rachel McCollum (.333) and senior outfielder Olivia Narron (.313).

In the circle, junior RHP Erin Poepping posted a 1-2 record, 1.66 earned run average, a complete game and 11 strikeouts in 12.2 innings pitched. Freshman RHP Logyn Estes (1-0) began her career with nine solid innings of work while also batting .294. Estes twirled 5.1 scoreless frames in the tournament finale versus Campbell while also posting a pair of hits - including her first collegiate home run.

The DePaul Series     DePaul leads the all-time series with East Carolina by a 10-3 margin, but the teams have not met on the softball diamond since 2005 when the Blue Demons and Pirates were members of Conference USA. DePaul has won four of the six matchups in Greenville but this weekend's pair of encounters will be the first since the ECU Softball Stadium opened in 2011.

About George Washington     George Washington, after putting together a 44-18 record and National Invitation Softball Championship appearance in 2019, began its 2020 season last weekend at the Puerto Vallarta College Challenge in Mexico. The Colonials went 0-5, falling to BYU 1-0, Utah Valley 9-1 in five innings, 18-0 to Oregon in five innings, 16-3 to Long Beach State in six innings and Oklahoma 5-2. Senior Jenna Cone paced the offensive efforts with a .357 batting average, five hits and two RBI. As a unit, George Washington hit .152 with a .152 slugging percentage and .246 on base percentage. The Colonials did not record an extra base hit in any of the five games. In terms of pitching, sophomore Megan Osterhaus threw a squad-high 11.1 innings, sporting a 0-2 record with a 9.26 ERA, 12 walks and three strikeouts. Collectively, the George Washington pitching staff compiled a 10.74 ERA, six strikeouts and 39 walks in 28.2 innings.

The George Washington Series     The series between the Pirates and Colonials is a short one - just a single contest. East Carolina topped George Washington by a 6-1 score back on Feb. 9, 2008 in Chapel Hill as part of the Carolina Classic.

Examining Hampton     Hampton has just one game in the books thus far in 2020 - a 15-4 victory over North Carolina A&T in Greensboro. Noelle Doan got the win, recording five strikeouts in 4.1 innings pitched. Tiera Washington had two hits and drove in two, while Davis was 1-for-3 with a run scored and driving in two. The Pirate and Aggies attempted to play a doubleheader, but game two was cancelled after three innings due to darkness.

The Hampton Series     East Carolina owns a 16-0 lead in the series with Hampton, including a 7-0 mark in Greenville. The teams last met in a doubleheader back on April 7, 2010 when ECU posted a pair of shutouts by 9-0 and 12-0 scorelines.

Nice And Tidy     The Pirates committed just two errors in 126 defensive chances during Opening Weekend. As a result, ECU currently ranks second in the American Athletic Conference and 21st nationally with a .984 fielding percentage.

Up Next     East Carolina completes its early-season homestand next weekend, welcoming Massachusetts, Pittsburgh and Towson to Greenville for the 2020 Pirate Invitational.