What looked like a comfortable win ended up coming down to the wire, but the ECU women's basketball team held on for a 61-57 road win over Memphis on Saturday afternoon. east carolina university, ECU, women's basketball, memphis, final score, february 17, 2020
Home
Categories
Login 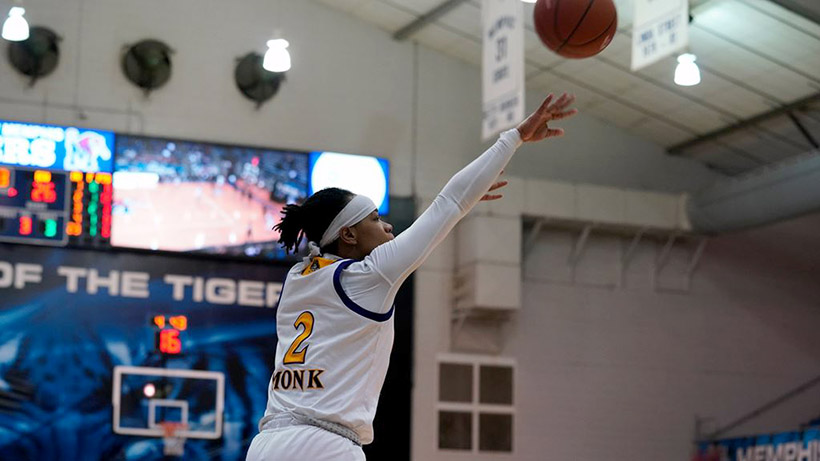 MEMPHIS, TENN.     What looked like a comfortable win ended up coming down to the wire, but the ECU women's basketball team held on for a 61-57 road win over Memphis on Saturday afternoon.

"I thought we came out from the beginning with a lot of energy," said head coach Kim McNeill. "We turned them over a lot in the press. We had probably our best first quarter of the year. I thought we got a little bit content and a little bit lax in the second half. But I'm proud of the way we didn't hang our heads and continued to fight and we were able to go on a run of our own. When they upped their energy, we were able to do the same and come out with the win."

Memphis (13-12, 4-8 AAC) was led by Mia Davis, who finished with a 16 points and nine rebounds. Dulcy Fankam Mendijadeu had a double-double, scoring 13 points and grabbing 11 rebounds while Madison Griggs finished with 13 points.

ECU could not have asked for much better of a start. After Memphis scored the opening basket, the Pirate defense took over and gave a boost to the offense. The Pirates rattled off an 18-2 run almost entirely powered by Monk and Claytor. Both hit a pair of triples and Monk had four steals during the run. By the end of the first quarter, the Pirates had a 22-9 lead.

While ECU's offense slowed in the second quarter, its defense still held strong. The Pirates scored just eight points in the frame, but held Memphis to only six of their own, giving ECU a 30-15 lead at the break. The 15 points for Memphis are the second-lowest first half total for a Pirate opponent this season.

However, Memphis came out of the halftime break firing and the Tigers were immediately back in the game. The Tigers started the second half on a 17-2 run, seven of which came from Griggs, and had the game tied at 32-32 less than five minutes into the third quarter.

With the Pirates teetering on the verge of collapse, Claytor acted as a stabilizing force. She hit a trio of free throws to keep ECU momentarily ahead. After a Griggs triple, her third of the quarter, tied the game, the Tigers took the lead on a layup. But Claytor answered the bell, making consecutive layups to push ECU back in front and then finding Monk for a triple. ECU made it a 9-0 run to end the third when Monk set up Tiara Chambers for a layup at the third quarter buzzer.

In the fourth quarter, it was Thompson's turn to step up and carry ECU. She scored the Pirates' first seven points of the fourth and 10 of the first 12, helping make sure ECU never let Memphis jump back ahead.

After Thompson hit a three with 2:56 to go and ECU leading 58-52, Memphis had one more run. The Tigers scored five straight points, the last a Fankam Mendijadeu layup with 28 seconds to go. Knowing a foul was coming, ECU ran an inbounds play from the sideline and Claytor found Thompson cutting to the basket for a layup.

The Pirates needed one more stop with Memphis trailing by three. ECU was able to force Griggs into a long three that bounced out, with Monk collecting the rebound. The senior guard made one free throw to make it a two-possession game and then Claytor finally iced the contest with a steal as time ran out.

ECU will be back home on Wednesday night for a matchup with Tulsa. Tipoff is scheduled for 7 p.m., inside Minges Coliseum.