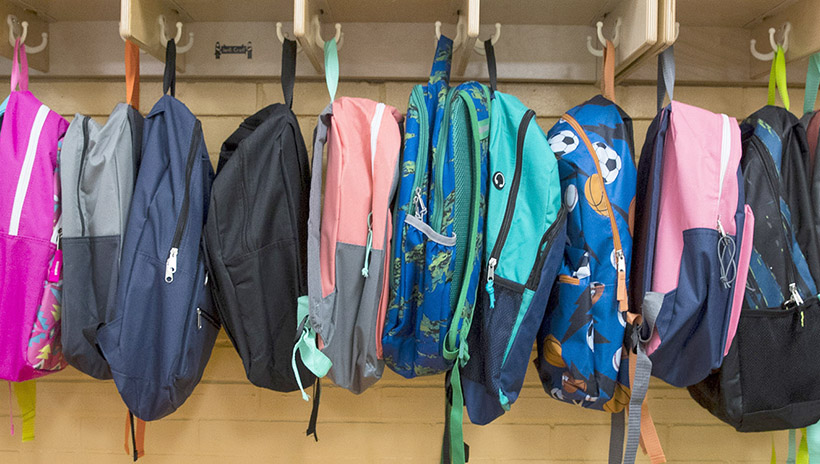 Pirate alumnus and elementary school principal Donald Wyatt connects with his students virtually while schools are closed due to the coronavirus. | Photo: Cliff Hollis

With schools closed across the state, children and parents are trying to navigate a new world of online learning amid the coronavirus pandemic.

"Principals have had to rethink how they lead in ways that are creative and positive," said Dr. Marjorie Ringler, chair of the ECU College of Education's Department of Educational Leadership. "I have talked to several principals and they are concerned about providing meals to their students, providing devices for learning at home, helping with internet access, and providing training and tools for teachers to use for teaching online."

"We're trying to make sure that we're in front of the children and the parents as much as possible," Wyatt said. "In a time where everybody is coining that 'new normal,' we want to make sure we're bringing a little bit of the old normal to the kids, parents and teachers."

Wyatt received his bachelor's degree in elementary education from ECU in 2003 and his Master of School Administration and Master of Curriculum and Development from ECU in 2010. He served as the principal of Sedge Garden Elementary School of Math and Science in Kernersville until March 30, when he became East Forsyth Middle School's principal. While at Sedge Garden, Wyatt said he was a very visible principal and the school closures due to the coronavirus didn't change that.

"Through Twitter, Facebook and YouTube Live, we've really been trying to come into their living rooms to give them a little bit of normalcy," he said.

Until the governor's executive order on March 30, administrators were able to access the school building, and Wyatt's team used that access to post across social media and connect with their students.

"We've been doing videos throughout the school," he said. "My assistant principal, our instructional facilitator and I would get on camera and walk around the school so they can envision themselves walking through the hallways, going into classrooms and things like that."

The school and county have also made other efforts to ensure their students are able to continue learning and have access to food.

On March 18, the first Wednesday schools were out, Sedge Garden began deploying Chromebooks and iPads to students who needed a device for e-learning. Wyatt said that the teachers were using Google Classroom, Seesaw and ClassDojo to interact with students and parents.

"The administrative team is putting messages up there like where we're reading books or kind of checking up to say hi," he said. "While this is e-learning, families are facing all kinds of different distractions and different barricades to their education. We want to make sure that the kids really have a strong support system."

The school has also helped with providing food for its students. Forsyth County, where the school is located, had 54 feeding sites that have dwindled as need diminished. From 10 a.m. to 2 p.m., people under the age of 18 were able to visit the sites and get a free breakfast and lunch. 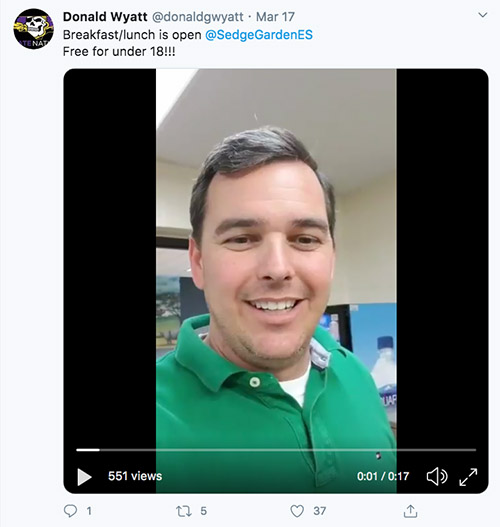 Donald Wyatt tweets about free breakfast and lunch for students.
"We have supplemented that with what we call snack packs. We've got some pre-made bags of healthy to-go food that we can pass out to them as well," Wyatt said.

According to Ringler, building community and having strong communication are key.

"School leaders are leading by example in these trying times. It is important that they document all that they are doing because this situation will change the way student learn in the future," she said.

Although Wyatt has moved to East Forsyth Middle School, also located in Kernersville, he hopes to continue many of the virtual activities he was doing with Sedge Garden Elementary students.

Having a familiar face is important during this time, he said.

"As we're locking in our homes, some of which are better situations than others, but all of which have all kinds of stress going on right now, you need an outside familiar face to say, 'You know what, I can't tell you it's going to be OK but we're in this together,'" Wyatt said.