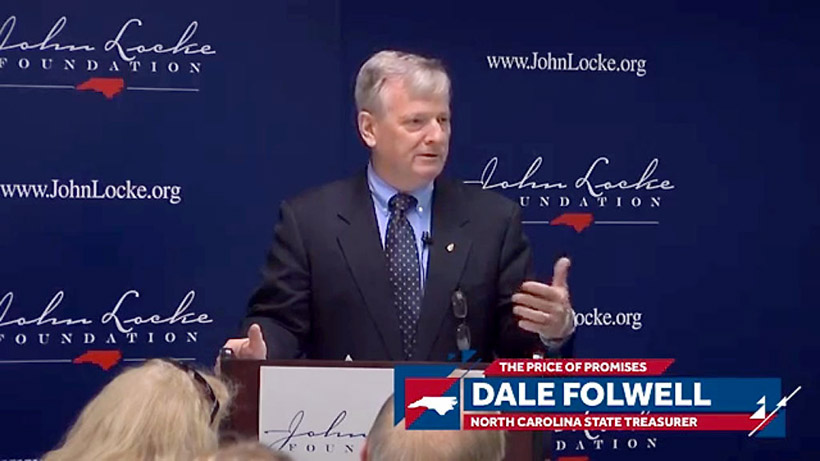 The COVID-19 pandemic could still threaten the long-term stability of state employee pensions, even though the state pension plan has recovered from the stock market crash, the state treasurer says.

The stock market's comeback has lifted North Carolina's pensions toward record levels, State Treasurer Dale Folwell said in his monthly "Ask Me Anything" on Tuesday, Aug. 4.

But the pandemic could stall reforms to secure the plan's long-term stability. That stability depends on how the state calculates the plans' assumed rate of returns on investments. Most states use inflated estimates. North Carolina hasn't hit its 7% returns target for more than 20 years, Folwell said.

Before the coronavirus pandemic, state public pension debt was already over $1 trillion nationwide. The consequences of the pandemic are unclear, but estimates from the Pension Integrity Project at Reason Foundation show liabilities could "skyrocket to between $1.5 trillion and $2 trillion."

North Carolina still has one of the most conservatively managed plans in the nation.

This fiscal year, North Carolina's median annual return hovered over 4% — a higher rate than many other public pensions in which fiscal years ended June 20 — but still far less than the 7% target for investment returns.

When the pandemic began, it sapped $4.2 billion from North Carolina's state pension plan. Folwell says the plan has rebounded to $106.1 billion, surpassing $105.6 billion, from December 2019.

In March, financial markets cratered, and stocks on the S&P 500 recorded the worst daily declines since 1987, when stocks plummeted about 20% on Black Monday. The pandemic erased 35% of major U.S. stock indexes' value in less than two months, reported the Wall Street Journal.

Across the nation, the value of public pension plans dropped a median 13.2% in the first three months of 2020, achieving the worst quarter in the past four decades, according to Wilshire Trust Universe Comparison Service. As of March 31, that left a $4.9 trillion hole in public pension plans.

North Carolina had the sixth-best funded pension plan in the nation; it was 90.7% funded in 2017, according to Public Plans Data.

"Making money is obviously a good thing," Coletti said. "Not being able to lower [the rate] works in the opposite direction. That's not good for the plan's long-term health. ... The longer we keep a higher expected rate of return, the further we are from reality."

Before the pandemic, Folwell pushed to lower the return rate, but the pandemic could scuttle his hopes for a more realistic target. The General Assembly faces a $2.6 billion gap in tax collections this year, and local governments are bracing for a drop in tax revenue.

"If you're not going to achieve something, why do you keep using it or saying it?" Folwell said. "But the reason is ... the less optimistic you are, the more money you have to put in."

Even in normal times, lowering the assumed return rate is a big ask. Shaving just 0.05% from the rate would demand tens of millions of dollars from state, county, and city governments.

"I think it should be lower, but these economic headwinds that the countries, the cities, and the state itself are facing," Folwell said. "You start going from 7% to 6.5%, that's a monster move. But it's something that will need to take place over the next few years."