A recent survey sponsored by Care4Carolina gauged the opinions of registered voters in North Carolina about health care issues and Medicaid expansion. There are wide-ranging results concerning voters' support of "closing the coverage gap," Medicaid Expansion, and other healthcare-related issues. The survey shows overwhelming support for Medicaid expansion. However, I have reason to doubt some of the results based on the way the questions are worded. Survey respondents may answers questions differently than they otherwise would depending on question-wording. I believe the Care4Carolina questions are worded in such a way that would make voters more likely to support a hypothetical Medicaid expansion than if they were presented with more context.

To start, consider this question about "closing the coverage gap." 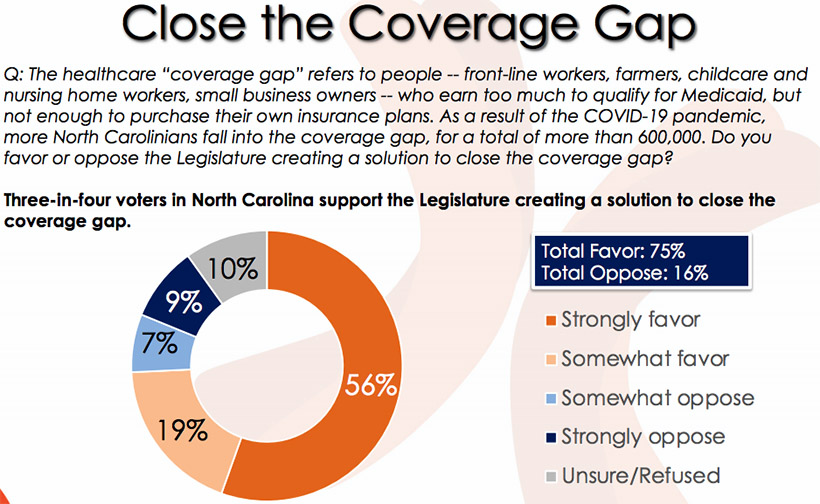 This question doesn't mention Medicaid expansion directly, only talking about the "coverage gap" and the legislature creating a solution for this "coverage gap." The question defines the "coverage gap" as those who can't afford health insurance on the individual market even after federal subsidies but don't qualify for Medicaid because they make too much money. So it's not surprising that a majority of respondents favor some solution to covering the populations defined by the question who fall into the "coverage gap" while not considering any other tradeoffs. 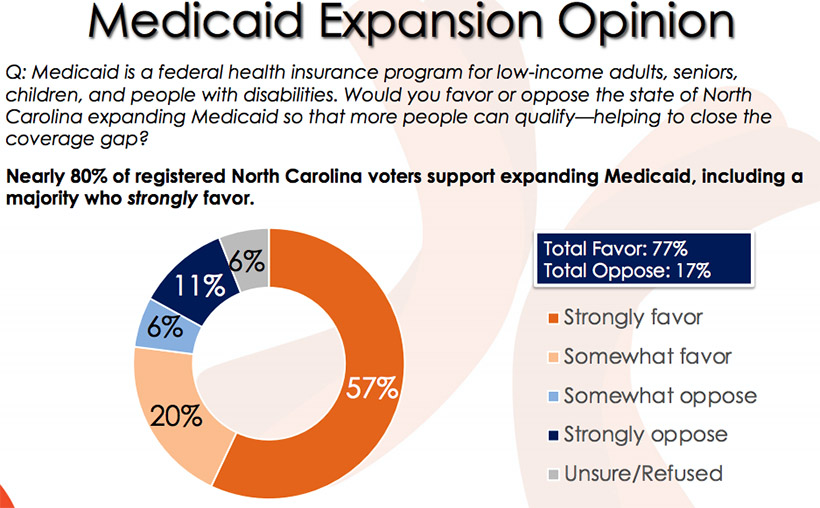 This question mentions Medicaid expansion by name and also invokes the "closing coverage gap" phrase as something that Medicaid expansion would solve. Again, framing the question this way as only a positive solution will likely cause more respondents to favor something while they took the survey. The previous question on "closing the coverage gap" is framed in such a way by mentioning "front-line workers, farmers, childcare and nursing home workers, and small business owners" as some of the population in the coverage gap, that I believe would cause more individuals to support such a proposal as Medicaid expansion than if the question was worded a different way. Of course, most voters probably would like to see more of their neighbors covered, but this makes no mention of the potential costs to the state or the tradeoffs of such a massive expansion of public health care.

Let's consider the same question worded in different ways. A Civitas Poll, conducted several times between late 2018 and 2019 asked about Medicaid Expansion support. The first question asks about expanding the program. In the polls latest iteration, total favorability was at 57% and opposition was at 32%:

Now, after adding in some more specifics to the question wording, such as many of the individuals who would now qualify for Medicaid already have health insurance and most of the are able-bodied adults, more respondents are less likely to support the program:

The same thing happens when you ask about additional enrollment in the program and potential costs to the state:

This type of variation in responses based on question-wording is common with health care policy surveys. One reason for this is that the economics of health care policy is complex and challenging for the average voter to fully grasp. That's not a knock on the intelligence of voters (unless it's coming from Affordable Care Act architect, Jonathan Gruber), that's just the reality with health care policy as it currently stands in this country. So, some respondents may have a different opinion on things than they otherwise would just depending on what information is presented in the question at the time of the survey. For example, protections with those who have pre-existing conditions is one of the most popular parts of the Affordable Care Act. However, when you describe the tradeoffs that occur by mandating protections for those with pre-existing conditions, support drops dramatically.

It's no secret that the Governor and Democrats in the legislature are going to make Medicaid expansion one of the biggest issues in the upcoming election. I have described in detail why this would not be a wise choice for the legislature given the other options to close the coverage gap and future budget uncertainty. But I don't put much stock into these survey results because it seems the survey had a predetermined outcome that it set out to achieve. I still believe that if voters were well educated on the tradeoffs of Medicaid expansion and these questions were worded differently, support would drop dramatically, as it has in other polls.