Published: Wednesday, September 23rd, 2020 @ 1:50 am
By: Carolina Journal   ( More Entries )
Publisher's Note: This post appears here courtesy of the Carolina Journal. The author of this post is Mitch Kokai. 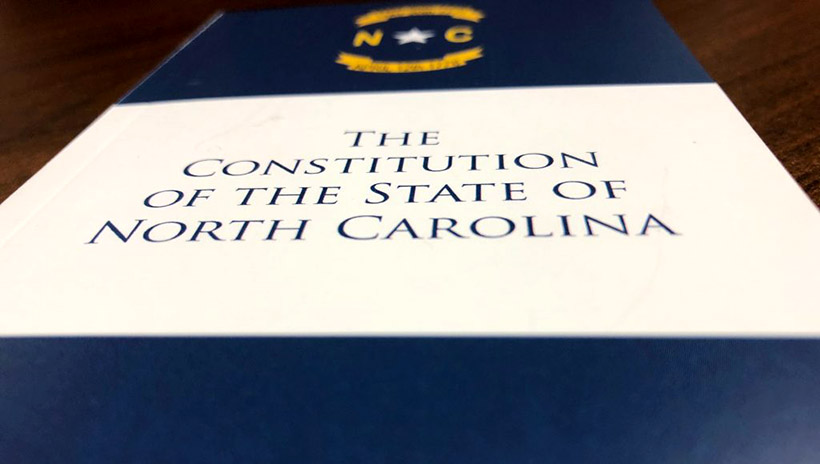 We're taught at an early age that the people maintain ultimate authority over government in our state and nation. An ongoing state court battle challenges that teaching.

Some 2,094,924 people cast ballots in 2018 to lower North Carolina's state constitutional cap on income taxes. With 57% support in a statewide referendum, tax cap proponents beat opponents by more than 537,000 votes.

A separate vote to place a voter identification requirement in the constitution was a bit closer. Still, the 2,049,121 "yes" votes amounted to 55% of the total. Voter ID advocates beat critics by more than 405,000 votes.

An election with no presidential, gubernatorial, or U.S. Senate race still attracted more than 3.7 million people, roughly 53% of all registered N.C. voters.

Among six constitutional amendments on the ballot that year, the income tax cap secured the second-highest vote total, trailing only a measure to enshrine more victims' rights into the state's governing document. Voter ID ranked No. 4, with a measure protecting hunting and fishing rights taking the third-highest vote total.

Yet Earls and her Supreme Court colleagues could end up deciding whether the 2 million votes cast for the income tax cap and voter ID end up amounting to nothing.

That's because plaintiffs have announced plans to seek the high court's review of NAACP v. Moore. It's a lawsuit that challenges both amendments — regardless of the decisive popular votes supporting both of them.

The NAACP argues that the public never should have had the chance to vote on either measure.

The General Assembly that placed the amendments on North Carolina's statewide ballot had lost a federal gerrymandering case. From the NAACP's perspective, the gerrymandering ruling rendered the Republican-led legislature "usurpers" with no authority to propose constitutional amendments.

Wake County Judge Bryan Collins bought that argument in February 2019. He threw out both amendments. Now, more than a year-and-a-half later, the N.C. Court of Appeals has reversed Collins' decision.

"We do not agree that our 'General Assembly lost its claim to popular sovereignty,'" Judge Chris Dillon wrote in the Appeals Court's primary decision.

The sovereignty argument could prove problematic if judges extended it to its logical conclusion.

"If there was a loss of popular sovereignty by our General Assembly, then all the laws passed by that body would be subject to attack, thus creating chaos and confusion," Dillon wrote. "One might argue that our current state constitution, adopted in 1971, was void, as it was proposed by a General Assembly that had only one African-American member due to the impact of gerrymandering and voter suppression measures."

Dillon chastised the trial court for attempting to "blue pencil" powers of the legislative branch, choosing which of its actions to label legitimate or illegitimate.

"[I]t might make more sense that we blue pencil our General Assembly's power to pass regular bills," Dillon explained. "The risk of a bill becoming law is much greater, as those can become law without the consent of anyone else, through veto-override. A bill proposing an amendment, however, cannot become law without the approval of the people, the source of popular sovereignty."

Unlike the trial court, Dillon recognized the role of the 2 million people who approved the amendments. Those people had the power to say no. They did say no to two other proposed amendments on the 2018 ballot.

Writing separately from Dillon, Judge Donna Stroud took aim at the NAACP's claim that Republican lawmakers exercised illegitimate authority. The U.S. Supreme Court that ruled against N.C. legislators "declined to conclude that the members of the General Assembly elected in unconstitutionally gerrymandered districts are usurpers." Instead, the nation's highest court "ordered the same exact General Assembly" to create new election maps, "with no limitations on the General Assembly's authority to act."

Along with Dillon, Stroud referenced the voting public's important role in approving the challenged amendments. "Since passing a constitutional amendment requires a majority of the voters of North Carolina in a statewide election unaffected by illegal districts, plaintiff's argument is actually weaker for a constitutional amendment than for other ordinary legislation," she wrote.

The bottom line for Stroud: "There is no North Carolina law to support the trial court's conclusions."

"If an unlawfully formed legislature could indeed amend the Constitution, it could do so to grant itself the veneer of legitimacy," Young wrote. "It could seek, by offering amendments for public approval, to ratify and make lawful its own unlawful existence. Such an act would necessarily be abhorrent to all principles of democracy."

Calling the state constitution "the fulcrum which permits the lever of our State's justice to move mountains," Young argued that the legislature — run by Republicans — lost all authority related to proposing constitutional amendments.

"To hold otherwise would be to permit total usurpation of our democracy and our system of laws," he argued.

The Supreme Court's decision in NAACP v. Moore could demonstrate just how interested justices are in avoiding "total usurpation" of the democratic process and the rule of law.