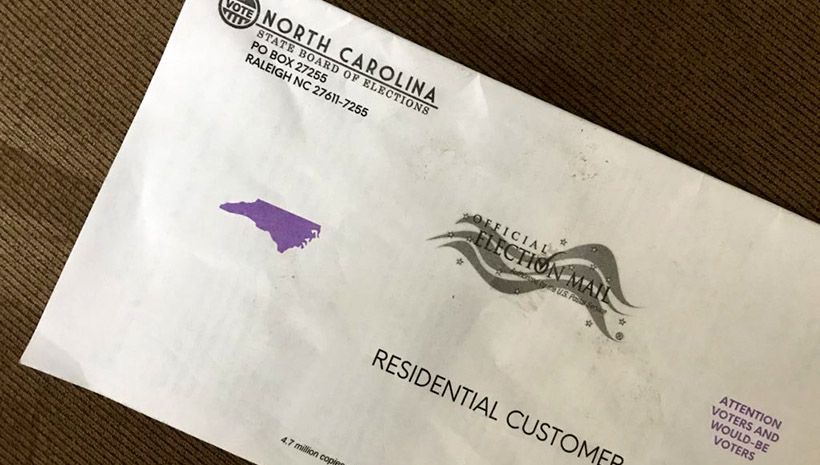 A federal judge has temporarily blocked the State Board of Elections' attempt to rewrite N.C. elections law. The board had tried to use a state-level lawsuit settlement to change absentee ballot rules.

Dever's restraining order remains in effect until Oct. 16, unless the legal issues are settled before then.

The latest lawsuits challenge the elections board's moves to change election rules without the approval of the legislature, as required by Article I of the U.S. Constitution. Two earlier lawsuits — the state suit N.C. Alliance of Retired Americans v. N.C. State Board of Elections and the federal suit Democracy NC v. N.C. State Board of Elections — would have circumvented legislative authority. The elections board run by Democrats would have been able to make rule changes in defiance of state law. The lawsuits filed by Republican legislative leaders and state voters seek to restore and reassert the General Assembly's authority.

The elections board tried to reach a settlement in the state lawsuit, challenging absentee ballot rules in a COVID-related elections bill passed by bipartisan supermajorities and signed into law in June.

All of these lawsuits are being argued as more than 1.1 million North Carolinians have requested absentee ballots for the Nov. 3 election and more than 340,000 have been processed.

Dever's order came less than a day after he heard parties in the federal lawsuits argue for nearly three hours at the federal courthouse in Raleigh. Lawyers for the elections board had just left a hearing in the state lawsuit, where they got a fleeting win from Superior Court Judge Bryan Collins.

Collins approved a settlement that would remove the requirement for absentee ballots to be signed by a witness; let county elections boards count ballots left in unmanned drop boxes; and extend the period for counting mailed absentee ballots to nine days after the election, rather than the three days set in state law.

Dever was having none of it. He cited the "Purcell doctrine," 2006 guidance from the U.S. Supreme Court saying election laws and rules shouldn't be changed near the date of an election.

"At bottom, the [elections board] has ignored the statutory scheme and arbitrarily created multiple, disparate regimes under which North Carolina voters cast absentee ballots," Dever wrote. "The [board] inequitably and materially upset the electoral status quo in the middle of an election."

Dever noted the elections board asked the legislature in March to end the witness requirement. The General Assembly rejected that request but did change state law, which had required two witnesses to sign packets containing completed absentee ballots. The less-restrictive one-witness requirement was included in H.B. 1169, which passed by a 105-14 vote in the N.C. House and 37-12 in the Senate. Democratic Gov. Roy Cooper signed the bill into law.

In a state lawsuit, the union-backed N.C. Alliance for Retired Americans tried to get the absentee ballot rules loosened. The group argued older voters may live alone, be afraid to vote in person during a pandemic, and have a tough time finding a witness for a mail ballot.

The elections board, by unanimous vote during a closed-session meeting in September, authorized Executive Director Karen Brinson Bell to negotiate a settlement. But the settlement she OK'd wasn't the settlement presented to the board. The board's two Republican members resigned the next day.

The board continued pursuing the settlement. On Friday, Collins approved that settlement. (Collins had generated criticism from Republican legislative leaders in 2019 when he threw out two voter-approved constitutional amendments, arguing that the lawmakers who placed the amendments on the statewide ballot amounted to a "usurper body" elected in illegal gerrymandered districts. A split three-judge Appeals Court panel reversed Collins' ruling on the amendments.)

"The NCSBOE inequitably and materially upset the electoral status quo in the middle of an election," he added.

Osteen addressed the same balloting issues in August, when he issued a 188-page order in a suit filed by left-wing activist group Democracy NC. Dever decided to shift the two latest federal suits to Osteen's court. Osteen has scheduled a hearing for Wednesday, Oct. 7, in the Democracy NC case.

"Judge Dever restored sanity into this election by temporarily blocking the 11th-hour rule changes to undo absentee ballot fraud protections. This is a win for every voter in the state who would prefer not to see the Board of Elections change the rules of the game after it's already started," Berger said in a statement.

"Lawmakers warned that Attorney General [Josh] Stein and Governor Cooper could not be trusted to administer elections law and proposed a Bipartisan Board of Elections to prevent their partisan schemes from being struck with help from radical state court judges — we were right," Moore said in a statement.

Stein and Cooper are running for re-election.