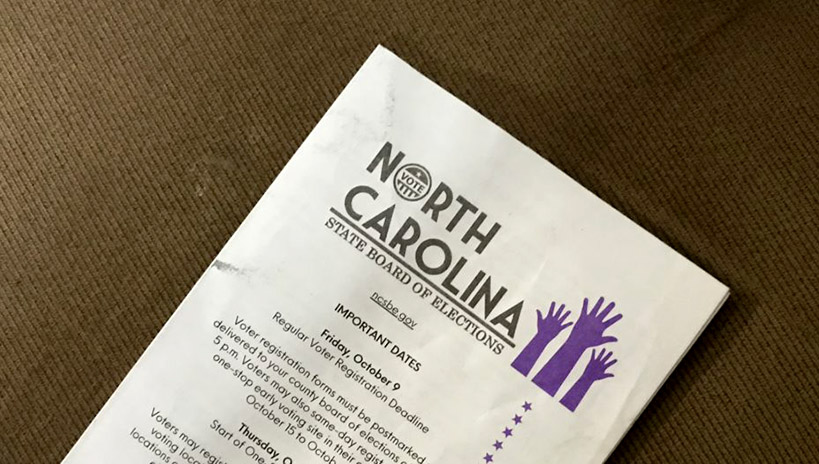 A recent attempt to rewrite North Carolina elections law is just one piece of a larger plan to turn the state blue, a panel of experts say.

The left's plan to push North Carolina away from conservatism involves voter activism, redistricting, and lawsuits, Walter said Monday. One example is a recent move in which the Democrat-controlled State Board of Elections attempted to change absentee ballot rules as part of a legal settlement. The agreement in N.C. Alliance of Retired Americans vs. NCSBE is one of several lawsuits involving Democratic legal heavyweight Marc Elias and state officials or voters.

He's filed or organized lawsuits for Democrats in 16 states through the group Democracy Docket.

"The left has an unlimited amount of money for litigation," Walter said.

Republicans say the litigation is intended to undermine the integrity of the election, in which nearly 400,000 absentee ballots already have been cast. The Alliance is a group affiliated with the AFL-CIO labor union.

On Oct. 2, U.S. District Court Judge James Dever blocked the SBE's attempts to remove witness signatures from absentee ballots. He said the legislature, rather than the elections board, has the constitutional authority to change elections law. He also suggested changing the rules for fixing absentee ballots during an election may violate the 14th Amendment rights of voters who cast ballots early.

Dever then moved all lawsuits on the matter to the supervision of U.S. District Court Judge William Osteen Jr. Osteen is overseeing a separate lawsuit from a left-wing activist group. He'll hear arguments Wednesday, Oct. 7.

The elections board may be feeling the heat from several sources. Carolina Journal has obtained a letter sent Oct. 1, from the top Republican on the U.S. House Committee on Administration to all state and county elections board officials. In it, Rep. Rodney Davis, R-Illinois, expressed doubt the state elections board "will conduct this election fairly and impartially."

Davis mentioned the proposed settlement with Elias' clients, calling Elias "one of the most partisan [Democratic] operatives in the election bar," saying he isn't "focused on good governance; rather, he traverses the country, picking up clients sympathetic to his main goal, which is to score victories for Democrats in court, even when those ideas have been defeated at the ballot box."

The U.S. Supreme Court weighed in, indirectly. On Monday, Oct. 6, the justices granted a temporary stay in a South Carolina lawsuit, filed by Democracy Docket clients, seeking to strip the witness signature requirement from S.C. absentee ballots. Without dissent, the justices said it was too close to the election to change the rules.

This is one argument Osteen will confront Wednesday, when he holds a hearing on the three lawsuits involving the elections board, seeking to loosen safeguards on absentee voting.

"This decision is going to be important for the absentee ballot cases before Judge Osteen for two reasons," said Jon Guze, director of legal studies at the John Locke Foundation. "The first reason is that it reinforces what the Supreme Court said in 2006, in Purcell v. Gonzalez, 'Court orders affecting elections ... can themselves result in voter confusion and consequent incentive to remain away from the polls. As an election draws closer, that risk will increase.' Given that in the North Carolina cases, the election is already underway, it's very hard to see how Osteen could allow the recent changes agreed to by the Board of Elections to stand.

"The second reason the decision is important in that it's very much on point with the North Carolina cases. In South Carolina, a court blocked the requirement that absentee ballots be signed by a witness, and among the changes to North Carolina's absentee ballot rules that state Judge Bryan Collins recently approved was one that had the effect of removing the witness requirement in North Carolina. It could hardly be clearer that the U.S. Supreme Court disapproves of courts making that kind of change while an election is underway."

These cases illustrate further why courts are so critical, and why voters should pay attention, JLF's Cooke said Monday.

"Marc Elias is a lawyer to the political stars of the socialist left," she said. "He's here to get Democrats elected."