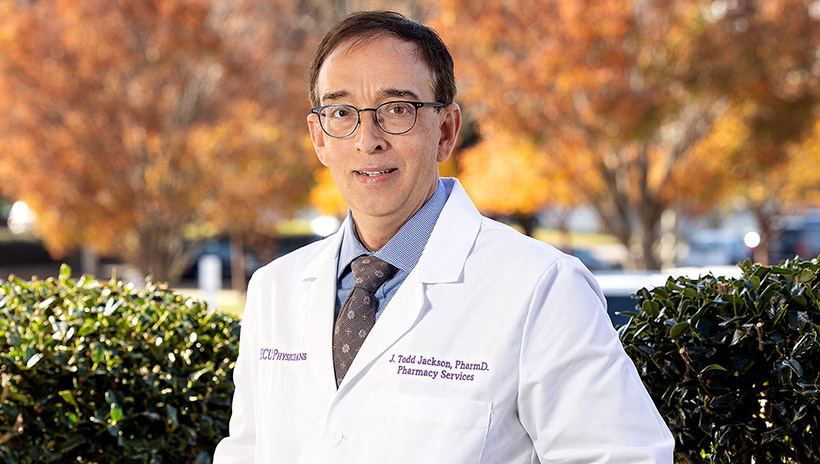 In addition to his regular duties overseeing pharmacy, lab and imaging services as the director of Ancillary Services for ECU Physicians and the Brody School of Medicine, Jackson volunteered his free time during the pandemic to help manufacture hand sanitizer for the university and surrounding communities. After that, he helped organize drive-thru flu vaccine clinics that provided a safer flu shot alternative for ECU students, employees and their families.


"His dedication to our patients and community has been evident throughout the COVID-19 pandemic by volunteering his time to manufacture hand sanitizer for the local community and university. He was instrumental in helping us roll out our new drive-thru flu vaccine clinic."
– Dr. Jason Foltz, chief medical officer of ECU Physicians
During its annual convention, which was held virtually from Oct. 29 through Nov. 6, the North Carolina Association of Pharmacists (NCAP) awarded the 2020 Don Blanton Award to Jackson for being "the pharmacist who contributed the most to the advancement of pharmacy in North Carolina during the past year."

The NCAP said while announcing Jackson was this year's winner that he "went above and beyond" this summer by stepping in for NCAP's executive director to help facilitate numerous meetings and communications between the association and North Carolina legislators. Jackson has also served as a chairperson on NCAP's Policy and Advocacy Committee for two years.

"Dr. Jackson was unanimously recognized as the Don Blanton Award recipient this year, due in large part to his leadership on our legislative and regulatory initiatives for improving pharmacy practice and patient care in North Carolina," said Dr. Penny Shelton, NCAP's executive director.

The Don Blanton Award was established in memory of its namesake, who served as NCPhA president in 1957-58. The award has been presented to one pharmacist annually since 1966.

"It is an honor and humbling to receive such a distinguished award as I work with many other pharmacists on the many efforts to keep pharmacy moving forward as a health care profession," Jackson said. "I enjoy learning from others while working toward common goals aimed at improving patient access to affordable timely care through traditional and non-traditional approaches."

To be honored for his work in 2020 was particularly meaningful to Jackson.

"This year has delivered challenges on many fronts. But more importantly, it has presented the opportunity to work closely with many wonderful colleagues and members of the community to meet those challenges," Jackson said. "Pharmacists readied themselves to provide COVID-19 testing as frontline locations for patients all while addressing unfair trade practices and reimbursement with state and federal legislators. We have so much more to achieve as a profession and many pharmacists have been working hard to bring this to light." 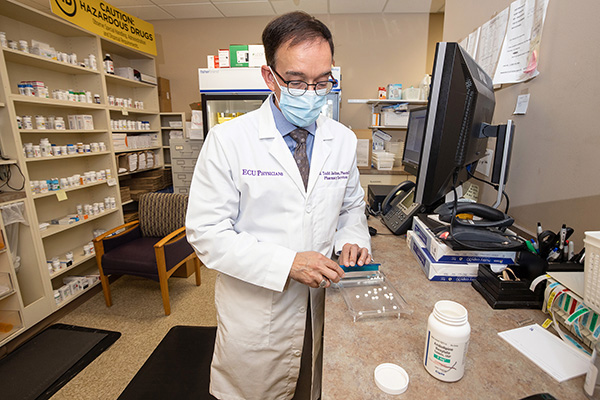 "His knowledge of pharmacy management is unparalleled, and he has been able to expand his role into coordinating our ancillary services of lab and imaging over the last year. His dedication to our patients and community has been evident throughout the COVID-19 pandemic by volunteering his time to manufacture hand sanitizer for the local community and university. He was instrumental in helping us roll out our new drive-thru flu vaccine clinic," Foltz said. "This recognition is well deserved and I'm thankful to have him on our team."

Jackson said he has not focused on the challenges of 2020 in a negative sense, but rather "what is needed and how quickly we can deliver." He hopes to continue working to bring out the best in himself and others in the future.

"We all represent ECU," Jackson said. "And I am happier for ECU to get this recognition than myself."