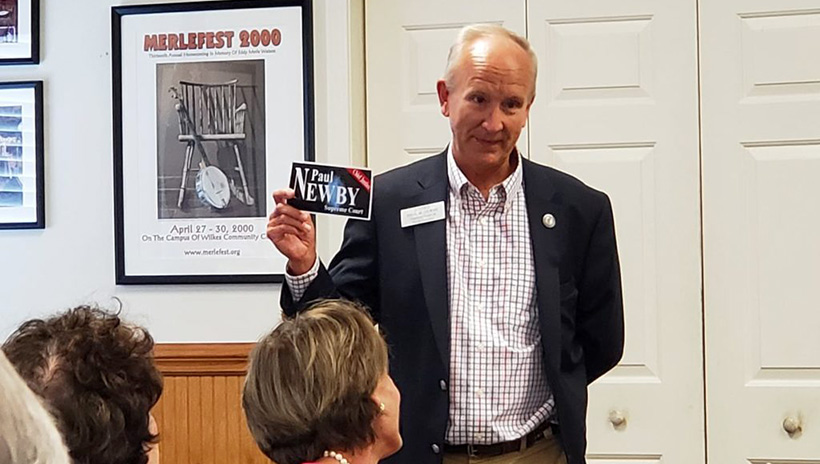 Newby's election completed a Republican sweep of eight statewide judicial seats, including three at the Supreme Court and five on the Court of Appeals.

Beasley lost her re-election bid to Newby by 406 votes (as of Nov. 19). Final statewide machine recount numbers showed Newby's lead shrank by only five votes, with the final margin of victory for Newby at 401 votes out of nearly 5.4 million cast. A hand-to-eye recount also confirmed Newby's victory.

In 2012, Gov. Bev Perdue elevated Beasley from the Court of Appeals to the Supreme Court. Beasley was elected to a full Supreme Court in 2014, when she narrowly defeated Republican Mike Robinson by 5,000 votes out of 2.4 million cast.

Knowing she was unlikely to prevail in a recount, Beasley sought new votes to count in hopes of securing a win. She filed protests in 90 counties to get changes in their vote tallies in an attempt to overturn the result. Specifically, Beasley asked the Democratic-controlled local boards of elections to reconsider already rejected absentee and provisional ballots.

But the chief justice's protests turned out to be problematic, controversial, and embarrassing. WRAL found the complaints filled with errors, including urging election officials to count ballots that already had been counted.

Even worse, the News and Observer found a shocking effort by the chief justice to steamroll the Equal Protection Clause of the U.S. Constitution. Beasley attempted to have reconsidered only the rejected ballots of registered Democrats and not Republicans:

"Across the more than 3,200 voter names Beasley's campaign provided to election officials in almost every county in North Carolina, only a handful belonged to registered Republicans."

The N&O further noted an "analysis that matched more than 2,800 names on the campaign's list with public election data shows that about 70% identify as Democrats. Another 800 are unaffiliated. Only nine voters matched from Beasley's list were members of the GOP — less than 1% of the total."

Civitas spoke with former N.C. State Board of Elections member John Lewis about his concerns regarding the Beasley protests and the need to keep partisanship out of the chief justice race. In fact, most Democratic-controlled local boards of elections found the Beasley protests meritless and rejected them outright.

As chief justice, Newby will control the administrative functions of the judicial branch, which includes 6,400 employees and an annual budget of $550 million. Newby will make his biggest impact and most critical decision in court administration when he names the director for the Administrative Office of the Courts. Soon after, he will begin working with the General Assembly on budget proposals that will seek to resume and accelerate court functions while maintaining safety during the COVID-19 pandemic.

Newby has indicated he intends to give local courthouses more say on how to resume normal operations and make up for lost time.

Democratic majorities on the state Supreme Court have routinely sided with the Cooper administration in lawsuits against legislation enacted by the Republican-controlled General Assembly, while also regularly siding with the governor over questions of executive power.

Newby, the Supreme Court's sole conservative voice since Martin's retirement, will be joined by two newly elected Republican justices, Phil Berger Jr. and Tamara Barringer. They hold a similar philosophy of judicial restraint and respect for the other elected branches of government. Newby and Republicans will immediately have a greater voice on North Carolina's highest court, even as Democrats continue to have a 4-3 majority.

Republican judicial candidates were likely boosted by a law and order theme after widespread vandalism and unrest was seen across North Carolina in 2020.

Beasley raised eyebrows by casting aspersions on the entire North Carolina judicial system in which she declared it racially unjust. Appeals Court Judge Lucy Inman joined in and described the court system as systematically racist in her race against Berger.

"The people of North Carolina said no activist judges, and yes to the rule of law," said Berger. "I'm thankful that the voters of this state have put their trust in me to serve them."

As chief justice, Newby will select the three-judge panels that give initial review to redistricting cases as well as constitutional challenges to acts passed by the General Assembly. Newby will also appoint the chief judge of the Court of Appeals, chief administrative law judge, and members of the N.C. Judicial Standards Commission.

Both sides have misjudged the politics of the courts

In 2016, Republican majorities in the General Assembly passed legislation requiring all Court of Appeals candidates to list their party affiliation. That fall, GOP candidates won all four races.

In 2018, the GOP-led General Assembly eliminated some judicial primaries, resulting in incumbent Republican Justice Barbara Jackson having to face two candidates in the general election. Jackson lost to liberal Democrat Anita Earls and Chris Anglin, another Republican who had recently changed his party affiliation and whose campaign was managed by a Democrat.

Yet in this election cycle, Cooper and Democrats made a serious political miscalculation.

Chief Justice Martin announced he would retire from the Supreme Court in February 2019 to become the dean of the law school at Regent University in Virginia Beach, Virginia.

Cooper appointed Beasley as Martin's successor. Traditionally, the governor filled a vacant chief justice position with the longest-serving member of the court, who would have been Newby. Cooper likely wanted to make history and gain favor with African American voters with the Beasley appointment.

Had Cooper left Beasley as an associate justice, the Democratic majority next year would have been no lower than 5-2. Instead, Democrats will control only four of the seven seats on the court.

Chief Justice-elect Newby and the four Democrats who make up the liberal majority begin 2021 with huge legal and political implications on the line. Two of the Democrats' four seats will be up for election in 2022, Democratic President-elect Joe Biden's first midterm.

Under normal circumstances, Republicans would have a leg up. The party with control of the White House usually does poorly during midterms.

This could affect court races. Democratic Associate Justice Robin Hudson faces mandatory retirement in early 2024. She is unlikely to file for re-election. Democratic Justice Sam Ervin IV also must defend his seat in 2022.

Republicans need to capture just one of the two seats to win a Supreme Court majority that could endure at least until 2026. The court majority elected in 2022 is likely to have the final say in state courts on legislative and congressional districts the Republican General Assembly will draw before the 2022 election.

Dallas Woodhouse is director of strategic operations at the Civitas Institute.
Go Back