For the past 4 years, the Trump Administration has been committed to strengthening American leadership in artificial intelligence (AI). After recognizing the strategic importance of AI to the Nation's future economy and security, the Trump Administration issued the first ever national AI strategy, committed to doubling AI research investment, established the first-ever national AI research institutes, released the world's first AI regulatory guidance, forged new international AI alliances, and established guidance for Federal use of AI.

Building upon this critical foundation, today the White House Office of Science and Technology Policy (OSTP) established the National Artificial Intelligence Initiative Office, further accelerating our efforts to ensure America's leadership in this critical field for years to come. The Office is charged with overseeing and implementing the United States national AI strategy and will serve as the central hub for Federal coordination and collaboration in AI research and policymaking across the government, as well as with private sector, academia, and other stakeholders.

The National AI Initiative Office is established in accordance with the recently passed National Artificial Intelligence Initiative Act of 2020. Demonstrating strong bipartisan support for the Administration's longstanding effort, the Act also codified into law and expanded many existing AI policies and initiatives at the White House and throughout the Federal Government:

Through the Trump Administration's historic efforts and the unparalleled enthusiasm and activity of the private sector and academia, the United States remains the world leader in artificial intelligence. The White House's new National AI Initiative Office will be integral to the Federal Government's efforts to maintain this leadership position for many years to come. 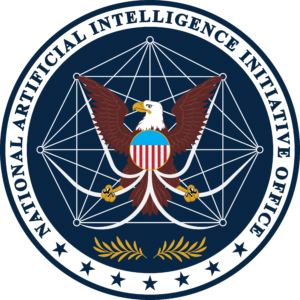 Each aspect of the Office's new seal is representative of key drivers of this initiative and the Office's mission:

You can visit a collection of all White House posts by clicking here.