How to escape leftwing Big Tech 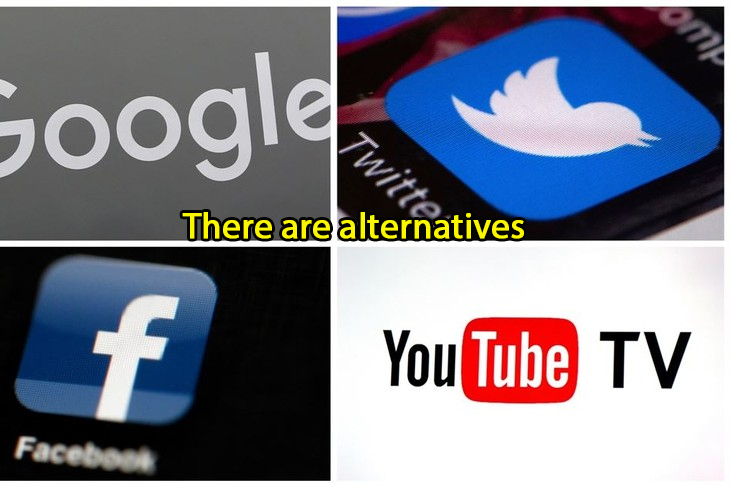 Big Tech is showing its totalitarian and far left colors in its interference in the November election and now it's blatant censorship of conservatives.  Conservatives need to vote with their feet and cut all ties possible with these internet bullies of Big Tech by switching their business to free speech oriented or at least neutral competitors.  Here is how to do it:

Chrome is Google, one of the very worst leftwing Big Tech companies.  Mozilla, parent company of Firefox, has declared that internet companies should "go beyond" merely deplatforming conservatives.  Then there are the browsers offered by Microsoft, another Big Tech swamp creature.

The alternatives are Brave, built by a former Mozilla CEO who had been pushed out of that company for his conservative political contributions, and Dissenter, built by the free speech social media site Gab with assistance from Brave.  Both have lots of privacy tools that the others don't such as automatically blocking trackers.  Either can be downloaded and installed easily and free at www.brave.com or www.dissenter.com .

GMail is Google.  'Nuf said!  Yahoo feeds you all sorts of highly partisan and very left wing fake news, so its stance is clear.  Many email providers also do tracking of your activity.  A long established privacy oriented email provider is ProtonMail, based in Switzerland.  While ProtonMail offers email accounts with lots of extra features for a fee, their free basic service offers a private and encrypted email service.  www.protonmail.com

Google is one of the most left wing and censorship-oriented of the Big Tech companies.  Their searches try to send you first to leftwing sites and have blocked or downrated conservative sites on a widescale basis.  No conservative or anyone who believes in freedom should use their search engine.  Bing is their major competitor and much less political, but it is still a creature of Microsoft.  The go-to search engine for conservatives these days is DuckDuckGo, and while not necessarily a conservative company, it is at least honest and neutral.  The EU has required that smart phones sold in Europe offer DuckDuckGo as a search alternative to Google, but that has not yet happened in the US. DuckDuckGo is also privacy oriented and are the polar opposite of the highly tracked Google.  DuckDuckGo.com

Twitter and Facebook seem to be in a huge competition as to who can beat up more on conservatives with outright censorship and have also heavily engaged in political coverups to benefit the Democrats.  Conservatives need to walk away from both, but stay on long enough to try to move your followers to free speech oriented platforms if you can.  The free speech site that is most like Facebook is MeWe which can be found at mewe.com  Those which are more like Twitter are Gab and Parler, although the latter is currently down due  to being bushwhacked by Amazon which yanked its server lease on almost no notice.  www.parler.com and www.gab.com

Amazon has demonstrated that it is a sworn enemy of free speech with its underhanded attack on Parler, but this is not its first rodeo in attacking free speech.  Its CEO is a hardcore "progressive".  There are lots of smaller online retailers out there and you only have to do a little searching to find them.  Pull the plug on Amazon and use their online competitors or just visit a local merchant.  Ironically, you can even use Amazon's site to find its competitors, as many link through the Amazon site, which takes a cut of the transaction.  The key is that once you have located a competitor that way, get off the Amazon site, and go directly visit the competitor's own website to make your purchase so leftie Amazon will not get a cut.

Vote with your feet,  Leave Big Tech.  They are NOT our friends, and there are good guys out there competing with them.