Federal Lawsuit Seeks To Block Cooper From Appointing Wake County Court Seat | Beaufort County Now | Former State Board of Elections Chairman Josh Howard says there could be dire consequences for future elections if the governor is allowed to appoint a judge to a newly created Wake County District Court seat.

Published: Friday, January 15th, 2021 @ 11:36 am
By: Carolina Journal   ( More Entries )
Publisher's Note: This post appears here courtesy of the Carolina Journal. The author of this post is Dallas Woodhouse. 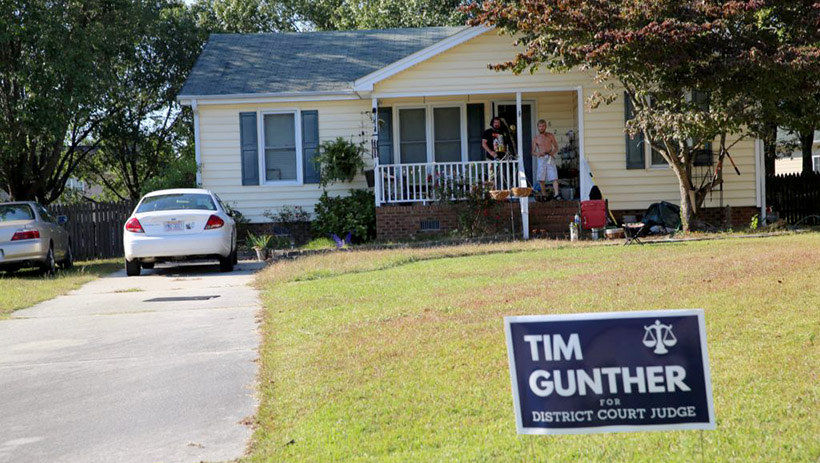 Former State Board of Elections Chairman Josh Howard says there could be dire consequences for future elections if the governor is allowed to appoint a judge to a newly created Wake County District Court seat. The top vote getter, a Democrat, was declared ineligible because he did not live in the district and knowingly filed for the seat anyway.

"I don't know why the governor's party would not just run anybody from anywhere just to gum up the election, so the governor could make the appointment, leaving the voters high and dry," said Howard, who filed the lawsuit on behalf of Beth Tanner, a Republican. Tanner came in second in the vote tally but received the most votes of the qualified candidates.

According to Jeanette Doran, president of the N.C. Institute of Constitutional Law, the suit filed in federal court on Jan. 12 by Tanner and two Wake County voters is challenging an attempt by the State Board of Elections and Gov. Roy Cooper to "bypass voters."

In 2020, the General Assembly created two new District Court judge seats in Wake County and required an election for those seats in November. One of them is for District 10-F. Two candidates ran in the general election: Tim Gunther and Beth Tanner. Gunther received 56% of the vote.

Carolina Journal Investigative Reporter Don Carrington first exposed that Gunther appeared to violate the residency requirement in October, nearly a month before the election. A voter filed a protest of Gunther's candidacy with the Wake County Board of Elections in October, but the county board didn't hear the protest until the election was concluded.

Gunther later admitted through his attorney that he wasn't eligible for the seat because he failed to meet the residency requirements.

On Nov. 19, the county board found Gunther didn't live in the district and could not be certified the winner.

"North Carolina's election law contains provisions to cover scenarios like the death or withdrawal of a candidate (G.S. § 163-112 and G.S. § 163-113). But the statutes do not address a scenario in which an illegal or ineligible candidate is disqualified following the election as the result of a protest filed in the middle of an election."

Only the State Board of Elections can issue certificates of election in a district court race. (G.S. § 163-182.4(b)(4)). The board never did that because Gunther couldn't legally hold the office. At a board hearing Dec.18, Tanner argued that she should be certified as the winner. Her argument was simple: Gunther was ineligible, so she effectively ran unopposed. Tanner also argued that, if she wasn't certified, then the State Board should order a new election.

In a 3-2 partisan vote, with Democrats in the majority, the board ruled against Tanner, declaring the seat vacant. This allows Gov. Roy Cooper to make an appointment.

In an interview with CJ, Republican State Board of Elections member Stacy "Four" Eggers said he believes the State Board was wrong on the law allowing the governor to make the appointment, but he says Tanner can't be declared the winner.

"The statutes make clear the legislature did not intend for a second-place vote getter to be declared a winner in a partisan race. Previous case law also makes that clear," said Eggers. "That is perhaps different in a nonpartisan city council race. The correct remedy is to allow the Democrat executive committee to name the replacement. It stops the possible gamesmanship that could come from running an ineligible candidate with high name recognition so the governor could exercise more power and make an appointment."

Eggers said declaring this seat vacant is particularly problematic, because it is a newly created seat that had never been "occupied" to begin with.

U.S. District Court Judge James Dever will now examine the due process and equal protection claims under the U.S. Constitution. Tanner has asked the federal judge for a temporary restraining order blocking Cooper from making an appointment to the seat, while asking the court to determine if a new election should be ordered.

Eggers says a new election is likely the best for the voters but requires four votes at the State Board of Elections, and is normally reserved for "tainted" elections, not ones with an ineligible candidate and unclear legal statutes.

"By claiming Gunther's unlawful candidacy created a vacancy which Cooper should fill, the State Board of Elections has done more than compromise the electoral process in a single race," said Doran. "The State Board is inviting ineligible candidates to run in future races as a set up for governors in the future to fill faux vacancies with political appointees. It is inviting a disregard for the rule of law and the election process."
Go Back