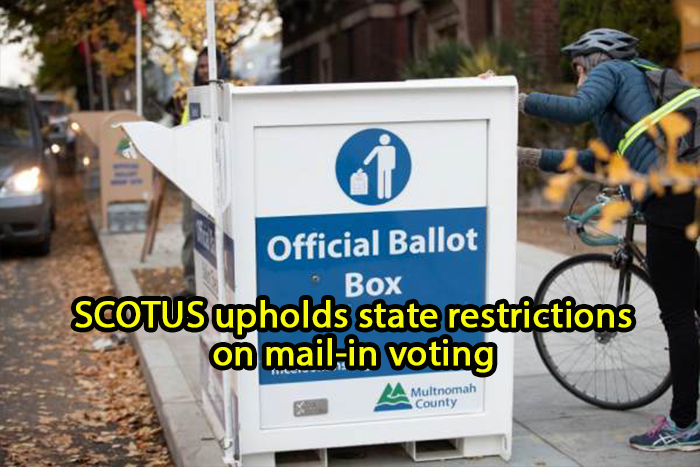 This is big news.
The Democrat-Marxist plan to steal elections like they did in 2020 DEPENDS on mail-in voting schemes.

It is well documented that the Democrats always do better with mail-in voting. It’s much easier to cheat that way.

No doubt, this is the Democrat-Marxist plan for the future. They were able to steal a landslide Trump victory this year using mail-in voting and other maneuvers.

On Wednesday the US Supreme Court ruled against universal vote-by-mail in Texas. This is good news for America, Texas, and the rule of law.

The U.S. Supreme Court turned away a Democratic bid to force universal vote-by-mail in Texas, leaving intact a state law that lets people cast no-excuse absentee ballots only if they are 65 or older.

The Texas Democratic Party and its allies argued unsuccessfully that the law violates the Constitution’s 26th Amendment, which says the right to vote “shall not be denied or abridged by the United States or by any state on account of age.”

Voting by mail became a sharply partisan issue amid President Donald Trump’s contentions that the practice led to widespread fraud in the November election. Texas’s Republican governor and attorney general urged the Supreme Court to reject the Democratic appeal.