The Sheriff Thing, A few facts

Login to Send a Private Message to The Beaufort Observer Editorial Team
, 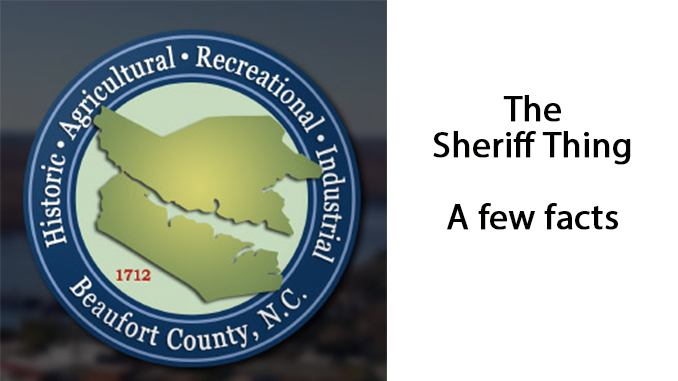 The Beaufort County Board of County Commissioners, by a vote of seven to zero  at the January  4th 2021 meeting, set up a study committee of three commissioners to evaluate changing the enforcing of criminal laws from the sheriff to a county wide police force.  Municipal police departments would not be affected. The three commissioners are: Stan Deatherage, Randy Walker and Hood Richardson.

This article is written with the goal of sticking to the facts.  We have plenty of opinions about the “politics of law enforcement” in Beaufort County.  We will bring them out later in opinion articles as the Beaufort County Police Committee completes its work and the full Board of Commissioners begins to consider the Committee’s final report.

Suffice it to say at this point that law enforcement is very important to any county, town or city.  A civil society requires effective law enforcement.  For that reason. the citizens have given law enforcement immense powers.  An officer with a badge and a gun can take away your freedom in a heartbeat and even if you are not guilty it can cost you a fortune to prove yourself innocent.  That power of the badge and gun can be abused.  Accountability is essential to maintain the public’s trust in the use of that power.

In recent months we have seen law enforcement come under attack as few of us have ever witnessed.  The “defund the police” movement has swept many large cities.  But the problems that impinge on the public trust of law enforcement is not confined to big cities.  Trust requires accountability.  Unfortunately, there are few bad apples in every barrel.  Fortunately, most law enforcement people are hard-working, honest and are willing to risk their lives to protect innocent citizens.  Those honest officers deserve administration and supervision that is above reproach.  Accountability requires transparency in how every law enforcement agency operates.  All too often we witness coverups, such as the time the former Sheriff in Beaufort County was pulled by a Washington Police Officer for driving carelessly.  When we sought to investigate the reports of that incident by private citizens who witnessed it, we ran into a stone wall.  The Washington Police Chief would not even release a copy of the officer’s report.  There was no transparency in that instance.  Then there was the matter of jail inmate who died without his family being notified and the family tried for months and months to get information on what had happened.  Obviously, there was a lack of transparency and accountability to any oversight outside of the agency itself.  For the most part law enforcement is left to oversee itself.  The public is kept in the dark and allowed to know only what the law enforcement bureaucrats want the public to know.

A major part of the problem of lack of transparency and accountability is in the way the legal structure is currently set up for county sheriffs.  The laws are such that the Sheriff can pretty much operate autonomously.  He is dependent on the County Commissioners for budget appropriations but after the budget is adopted, he can spend the money more or less how he chooses by the way Beaufort County does its budget.  He can buy extravagant vehicles and equipment.  He can pay his employees what he wants, without having to follow county personnel policies if there is poor oversight.

The fiscal authority of the sheriff is similar to that of school boards.  Both get appropriations from the county commission but the commissioners seldom know what actually happened to the money and what the taxpayers got for their money.  But the schools do have an elected school board to oversee the operations of the public schools.  There is no such oversight of the county sheriff.  They are elected ever four years by the voters, but most of those voters could not tell you whether the sheriff was a good steward of the people’s money or not.  History has shown that most sheriffs are elected on name recognition, not on the public’s understanding of how well they manage the responsibility.  This is the result of the lack of transparency.

For example, if we were to ask you if crime is up or declining in recent years could you tell us, and be sure of it?  Could you tell us which kinds of crime, or which geographical areas are most prevalent of the worst crime areas?  Could you tell us the number of vehicles that are used by employees for personal business and what it cost the taxpayers?  Could you tell us whether the sheriff insured that inmates in the county jail got a speedy trial (which would reduce the expenses to the taxpayers)?  When was the last time you read a report on what the Sheriff considers the major issue(s) he is facing and what he has actually done about those issues?

We hope the Police Committee will investigate the way law enforcement is organized in Beaufort County and assess what the needs are as well as what the problems are.  We trust the Committee will involve the public in this study, by listening to the people in appropriate and timely ways.

Many people do not know that the Office of Sheriff is what is sometimes called a “Constitutional Office.”  That is, the office exists as a result of the Constitution mandating it.  The same is true, incidentally, of the office of county commissioner and the office of school superintendent.  By being mandated by the N. C. Constitution the offices cannot be abolished.  But beyond that, both the Constitution and the statutes are very skimpy in laying out how the sheriff’s office will function.  The law does make him the county jailer.  Each county must provide for a jail and if it does the Sheriff is in charge of the jail.  The law requires that the county commission provide the Sheriff with an office and at least two deputies (NCGS 153A-103).  Beyond that, the law is silent on how many deputies are allocated and it is even silent on the policies of what duties are assigned to a deputy or how the force is organized.

Most significantly, in our opinion, the law is very skimpy in insuring openness and transparency.  There are no accountability standards mandated by law, such a civilian review boards or oversight such as school boards provide.  Yet, typically the Sheriff’s budget is second only to education in the consumption of local tax dollars.

Traditionally, especially in rural counties such as Beaufort, law enforcement was spread thin.  People and businesses who lived in towns and cities began to want a greater police service, so they formed municipal police departments.  But sheriffs typically provided some service even in municipalities that had police departments.  This created duplication and overlap in some instances.  We see this quite often in Beaufort County.  Thus, it raises jurisdiction issues.  That is something we would hope the Committee addresses.  Duplication and overlaps should be avoided to save taxpayer money.

It should be clearly stated that the creation of county police force would require action by the state legislature.  That legislation would need to be very carefully crafted and this study committee the Board of Commissioners has appointed could be very instrumental in helping do that.

The book “County Government in North Carolina, Fourth Edition: edited by A. Flemming Bell, II and Warren Jake Wicker, published by the UNC School of Government states: “County government’s involvement with the criminal justice system has traditionally focused on law enforcement which is carried out through the sheriff’s department or occasionally through a county police department”.

Looking at the development of counties, we did not need a full time law enforcement official until the population grew large enough so that the criminal business got “so good” the locals did not have time to take care of matters themselves.

In a county police department, all officers would be employees of the county with the same employment rights as any other county employee.  Sheriff’s deputies are now paid directly by the county but have no guarantee of employment when a new sheriff is elected.  They are “at will” employees of the sheriff.  Because of their unique status as being the same as the sheriff, their employment can be terminated for any reason or no reason by the Sheriff.

We encourage the Police Committee to not be hasty in looking at the cost of operating a police department along with the benefits to employees of a police department and the citizens of Beaufort County.  We believe continuity of employment will lead to better investigations, more solved crimes and less stress among police department employees. We also hope the Committee and Commission will examine closely the fiscal issues, the jurisdictional issues and most importantly, improving transparency and accountability, no matter what the organizational scheme might be.

We’ll keep you informed as the Committee moves forward.  It’s meetings are open to the public.