Pirates Surge Past Memphis 81-62 | Beaufort County Now | A second-half surge carried the ECU women's basketball team to an 81-62 win over Memphis on Sunday afternoon in the final home game of the season. 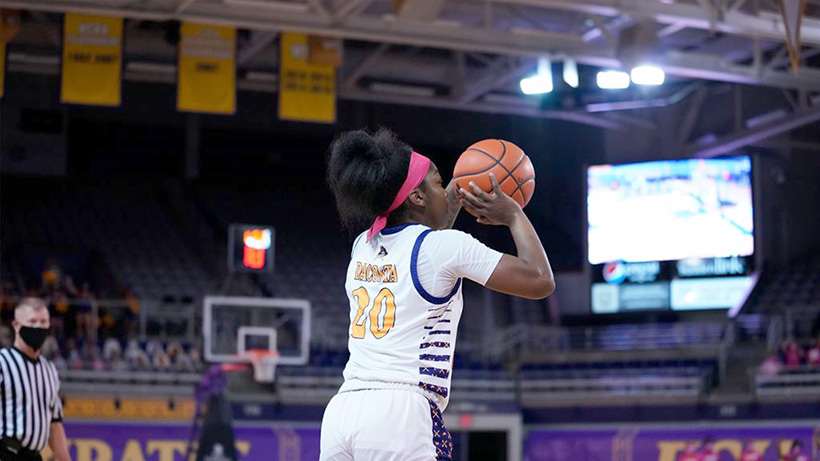 The Pirates were led in scoring by Maddie Moore who returned from a two-game absence to finish with 18 points, tying her career-high. Moore was one of four Pirates to finish in double-figures, as Synia Johnson finished with 13 while Taniyah Thompson and Sierra DaCosta each contributed 12 points. Johnson's 13 points represent a career-high for the freshman.

The early going looked bleak for the Pirates. Memphis held ECU to just six points over the first six minutes of the contest while Madison Griggs hit a trio of three-pointers for the Tigers to stake Memphis to an 18-6 lead. DaCosta sparked ECU to life a bit by knocking down a pair of three-pointers of her own to cut the deficit to 22-18 after a quarter of play.

In the second quarter, neither team could muster much offense as they combined for 23 points in the frame. ECU had chances to finally take its first lead of the game, but four missed free throws in the final minute allowed Memphis to take a slim 32-31 lead into the halftime break.

The third quarter seemed to be more of the same as ECU scored just two points over the first three minutes, allowing Memphis to push the lead back to five.

However, the Pirates turned up the heat on defense and that allowed them to also get things going on the offensive end. From the seven minute mark of the third quarter until the end of the frame, ECU went on a 21-6 run, with nine of those points coming off six Memphis turnovers. Ryann Evans was one of three Pirates who did not miss a shot in the third quarter, as Evans scored seven points on a three-pointer, a layup and a pair of free throws. Thompson added six points of her own in the frame and Johnson had five.

Leading 56-44 heading into the fourth, the Pirates quickly took that lead and doubled it. After a Memphis free throw to open the quarter, Monk nailed a triple and then turned a steal into a layup. After a Dominique Claytor steal, Monk set up Moore for a three-pointer of her own to push the lead to 19. The Pirate onslaught continued after a Memphis timeout, with Johnson turning a steal into a layup and then Monk assisted another triple from Moore. The run came to a close with a layup from DaCosta and once the dust settled, ECU led 71-45.

Memphis had its best stretch of the game right after. The Tigers went on a 10-0 run in just under two minutes, mainly thanks to Coriah Beck and Keke Hunter who scored all 10 points. But Moore answered for ECU, scoring layups on back-to-back possessions. Memphis never got within 15 points the rest of the way.

It is the second time this season that ECU has scored at least 80 points, the first coming in the season opener at Towson. It is the most points the Pirates have scored in Minges Coliseum since the season-opener of the 2018-19 campaign against Maryland Eastern-Shore.

The Pirates will close out the regular season on Tuesday evening as they head to New Orleans to battle Tulane. That game will get started at 7 pm., and will be broadcast on ESPN+.

On the third quarter performance:     "Very similar to when we played them down there, they jumped on us early. It took us until the second half to figure out the flow of the game and to really dig in and buy into the game plan. The game plan didn't change from last time. We know they want to get that ball in the paint. We really focused on all week, just packing up the paint. Not allowing the big to go off on us like we did against Cincinnati. But I thought, defensively, we did a really good job. We were flying around and anticipating passes which allowed us to get out in transition and score a lot of points in transition which I think it's the first time we've shot 45% from the field and made 32 baskets. So when you're getting layups like that and you're finishing, it makes the game fun. It's fun to coach them when they play that way because we're playing to our identity."

On getting to 81 points:     "It's conference play. I told them in one of the timeouts that when you've got the opportunity to really put it on someone, put it on them and don't let off the gas. I thought we got a little bit sloppy there at the end breaking the press. Which we shouldn't because we got against it every single day going against ourselves. But overall, I thought it was a great game. We had four kids in double-figures, which is great and what I want. We turned them over 24 times, we had 19 steals and we had 29 points off of that. So I just thought it was a good total team effort."

On the feeling at this point in the season:     "Just trying to stay confident. Still trying to continue to get better. Every day we step out on that floor, it's an opportunity to get better. I just told the girls, this tournament is wide open. There's no dominant team out there. We've proven that we can play with any team in the league. So we should be feeling good about ourselves. Feeling confident that we can go in there and make some noise. Obviously, we have one game to finish out the conference season with Tulane who's playing very well right now and it's going to be a great test for us on Tuesday. But I feel good. We can play against anybody. When we bring it and play the way we know how to play and we play together, we can beat anybody in the league."

On what clicked in the third quarter:     "Just my teammates and my coaches believing in me. My coaches always get on me, saying it's going to fall. You don't have to rush it. So I think that's kind of what I did. I kind of just let the game come to me. The second half, I just played my game."

On how getting out in transition helped shift the momentum:     "We work it on every day in practice. Transition, getting out, we do a lot of drills where we run and someone just launches the ball. So it's kind of us just implementing what we work on in practice. We want to score in transition so we just had to get out."