If this bill becomes law it will mean the death of the American republic | Beaufort County Now | HR 1 is designed to insure one-party rule (Democrats). 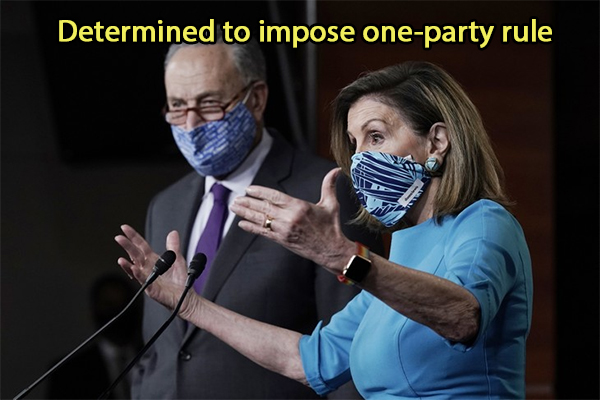 On Thursday night the House Democrats passed by a vote of 220-210 legislation designed to revamp voting procedures on a national level.

It is telling that the legislation titled “HR1” introduced by the Nancy Pelosi-led Democrats in the House is a power grab dressed up as “election reform,” the provisions of which are all intended to create more Democrat candidate votes in upcoming elections in order to secure a permanent Democrat Party control of Congress and the White House.  Passage of this legislation was their first priority — it is numbered ahead of all other proposals because securing power unto themselves in the form of hegemony over the institutions of government is how Marxists and socialists transform the countries they seek to control.

HR1 is a collection of election law “reforms” meant to dictate to states the manner by which all states shall conduct their elections in the future, mandating certain voting practices be followed while making other voting practices illegal.

“No excuse” mail-in voting for all voters in all states.

15 days of early voting for any election including federal offices.

Automatic voter registration — unless the individual opts out — upon the submission of personal information (name, address) to any state agency for any purpose.

Online voter registration up to and including on election day.

Counting of illegal aliens among state populations fo purpose of determining number of congressional districts in each state.

Public financing by creating “$6 to $1” match of federal funds against small-donor campaign contributions of $200 or less.

No purging of voter rolls.

No signature matching for mail-in ballots.

No redistricting by legislative bodies in the States — only by non-partisan commissions.

No disqualification of ballots for “out of precinct” voting.

Earlier this week, the Supreme Court heard oral argument in cases from Arizona where the DNC challenged two Arizona election laws — one that criminalized “ballot harvesting,” and one that disqualified any ballot cast by a voter in the wrong voting precinct.  Similar election laws are used in many other states.  I wrote about the cases here, prior to the oral argument taking place.  The decision is expected before June, but the sentiment of legal observers is that the Justices will uphold both statutes as not violating the Voting Rights Act of 1965.

HR1 would make both statutes illegal.

Every Democrat voted in favor of passage and every Republican voted against passage.  The legislation now goes to the Senate.

Because this legislation must get through the Senate under its normal rules, it will need 60 votes to end debate and proceed to a vote.  Similar legislation was passed by the House in 2019 after the Democrats took control of the House, but it was never considered in the GOP-controlled Senate.

Even though the Democrats now control the Senate, there is no chance that 10 GOP Senators will agree to allow this legislation to come up for a vote.  The only path to passage will be to end the “filibuster” rule.

The “filibuster” rule is a procedural rule in the Senate; it is not a statute or part of the Constitution.  Several years ago, Harry Reid, as Senate Majority Leader, established the precedent that Senate Rules could be amended during a legislative session by majority vote.  In order to get HR1 brought to a vote in the Senate, Majority Leader Schumer will need to amend the legislative “filibuster” rule to eliminate the 60 vote requirement to end debate — that change would take only 51 votes.  VP Harris could break a 50-50 tie and cast the 51st vote to amend the rules and eliminate the filibuster, and that would potentially allow passage of HR1 on a party-line vote — in both Houses of Congress.

Democratic Senators Joe Manchin and Kyrsten Sinema have expressed opposition to eliminating the filibuster, with Manchin being the most adamant in his position.  Earlier this week, he was again asked by members of the media about his prior position that he would “never” change his mind about ending the filibuster.

Manchin has insisted that his position is based on the principle that for legislation to pass in the Senate — even on a party-line vote — there must be meaningful bi-partisan involvement by members of both parties.  While it is not necessary to have minority party support in voting for the legislation, Manchin’s view is that the minority party must be willing to let the legislation come up for a vote rather than have all the processes of the Senate take place on a raw partisan majority basis.

What is also true, however, is that Manchin understands that he is the Senate Majority Leader right now.  With the filibuster in place, no legislation has any chance of advancing to a vote without his support.  The moment “50” votes become all that is needed, his vote is no more meaningful than one of the Senate RINOs who might be persuaded to support Democrat-backed legislation that Manchin opposes.  The White House and Majority Leader Schumer can play “Let’s Make a Deal” with Sen. Murkowski, Sen. Collins, or Sen. Romney in an effort to “buy” their support for any piece of legislation by offering “goodies” for their states.

Critical to Manchin is that the main provisions of the Green New Deal not be allowed to come up for a vote, as the coal and natural gas industries are the backbones of West Virginia’s economy.

So long as Manchin — and maybe Sinema — remains unwilling to change the rules to eliminate the filibuster, HR1 should remain stalled in the Senate.

But HR1 reflects the dreams of the Democrats — federally mandated elections at the state level which create avenues by which massive vote fraud efforts can be orchestrated by Democrat Party interest groups even in states with significant GOP electoral majorities.

Source:  House Passes "Permanent Democrat Rule Act" by a Vote of 220-210 in an Effort to Create a US Politburo and One-Party Government – RedState

Note that flipping five seats in the House would have change the outcome of this.  It must be done in 2022!