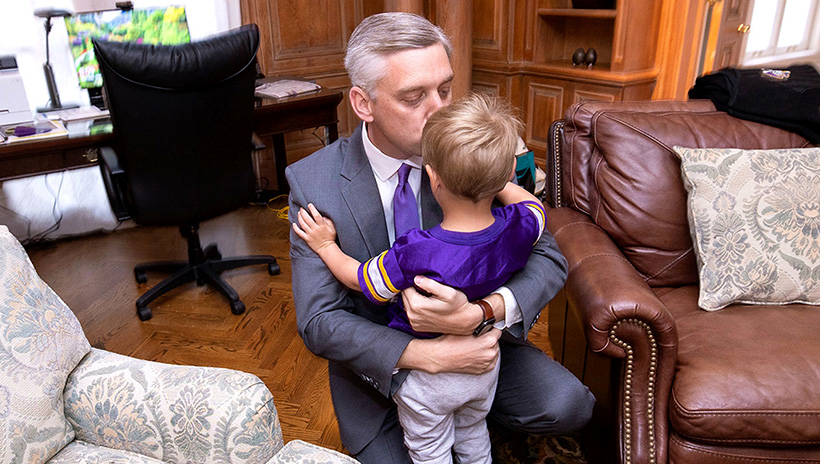 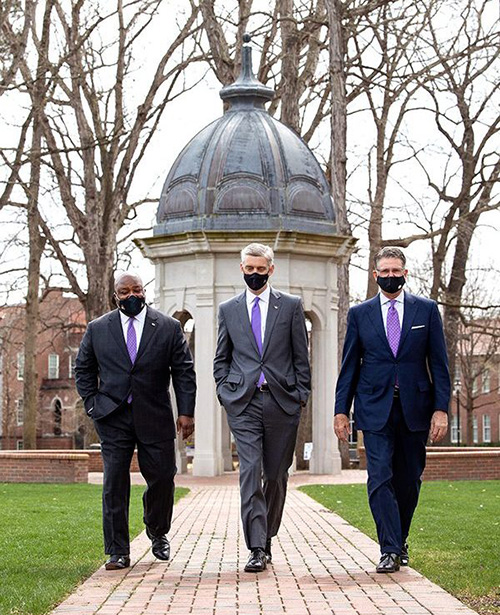 Vince Smith, left, secretary of the ECU Board of Trustees, walks across campus with Chancellor Philip Rogers, center, and Vern Davenport, right, chair of the board, on Rogers’ first day.
Monday marked a homecoming for Dr. Philip Rogers' first official day as chancellor at East Carolina University.

His office in the 90-year-old Spilman Building, tucked in a corner on the first floor facing Fifth Street, is familiar. Rogers once worked just up the stairs when he served as chief of staff from 2008-2013.

He has known many of the people who work there for years, and those longtime connections and relationships will help ease the transition this week.

While many ECU employees are still working from home because of the pandemic, Rogers made the rounds talking with several people who were physically in the office between meetings, phone calls and other obligations.

"The beauty of it is we've been in touch," Hardy said. "These relationships have been there."

Rogers was also welcomed by Board of Trustees chairman Vern Davenport and secretary Vince Smith, who wanted to be in Greenville to show their support on his first day.

"This is an exciting day and one we've been waiting for," said Smith, who lives in Vienna, Virginia. "It's a critically important day for the university because you're essentially installing a chancellor who I hope and pray will be here for a long time."

"It's important for Pirate Nation to recognize this moment," said Davenport, who lives in Wake Forest. "This is a historical day for the university after a very long, thoughtful and well-executed process."

A 20-member search committee chaired by Davenport formed in November 2019 — before the pandemic put a temporary halt to the committee's work. Almost a year later, Rogers was appointed as ECU's 12th chancellor on Dec. 17 by the UNC System Board of Governors (BOG) following a recommendation by UNC System President Peter Hans.

By mid-morning, Rogers had met virtually to answer questions from reporters ranging from his short- and long-term plans to his priorities for dealing with issues resulting from the COVID-19 pandemic. 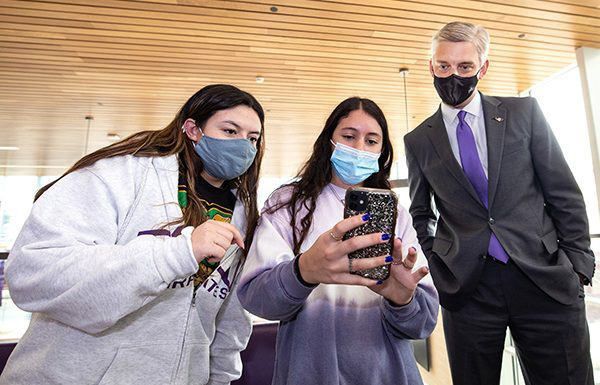 Rogers looks at a homecoming float designed by ECU students Izzy Gonzales, left, and Brianna Cavicchia in the Main Campus Student Center.
"It is an interesting time to be starting this role and finding the right ways to connect with students is top of mind for me," he said. "I'm going to be working closely with our Division of Student Affairs to ensure that we can create the right formal and informal opportunities to get to know each other. It may be one of the things I'm most looking forward to."

While walking to the Main Campus Student Center, Rogers happened upon a campus tour with prospective students, so he stopped to welcome them and encourage them to enroll.

At the student center, Rogers met with Student Government Association members and other students enjoying lunch and shopping in Dowdy Student Stores.

Tucker Robbins, SGA president, said Rogers' presence means a lot to him. "I've been here four years, and he's the fourth chancellor we've had," said Robbins, a senior who looks forward to Rogers bringing stability and longevity to ECU. "Even though I won't be here, I'm really excited for the future."

Robbins also noted Mitchelson's generous service as interim chancellor since October 2019. "The transition has been phenomenal. They've made my job as student advocate a lot easier."

"He seems like a really nice guy — down-to-earth, seems very chill, which is good," Fleming said.

Rogers' personal homecoming coincided with ECU's week-long homecoming celebration. Rogers attended Monday's Cannonball Kickoff, the official start of ECU's homecoming week, which was postponed from the fall due to the pandemic.

On March 18, Rogers will headline ECU's Cupola Conversations, a virtual event at 4 p.m. that will cover a variety of topics from Rogers' personal and professional path to becoming ECU chancellor to where he sees ECU fitting into the state and national landscape in higher education.
Go Back