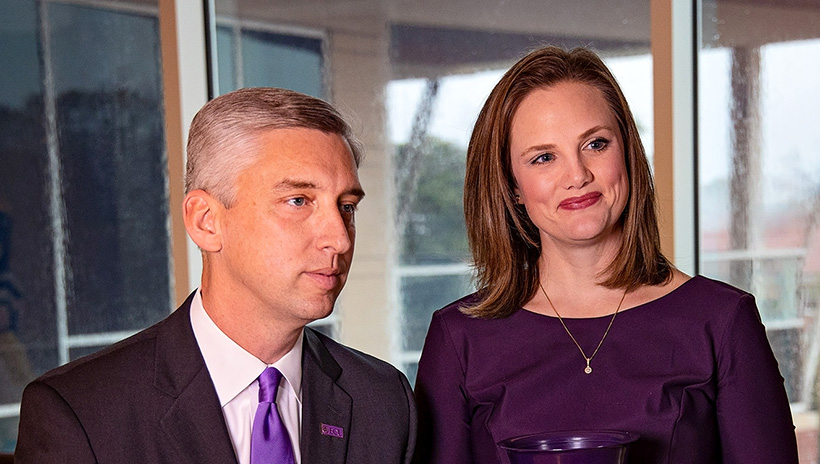 Two days after moving into the chancellor's residence in Greenville, Dr. Rebekah Rogers sits among half-unpacked boxes and stacks of photos waiting to be hung. Adding to the chaos, a small horde of East Carolina University photographers, videographers and journalists have descended on the home with cameras, cords and lighting equipment to gather footage of the university's newest leaders. While her husband, ECU's 12th chancellor Philip Rogers, is downstairs being filmed, Rebekah Rogers takes an interview of her own upstairs, dressed head to toe in purple, seeming unruffled by the activity around her.

Her demeanor is warm and welcoming. She asks everyone where they're from and how long they've worked with ECU. Is she nervous about stepping into the spotlight as the other half of ECU's highest officer? Yes. But there's comfort and familiarity in returning to the university, where Rogers is a two-time graduate and former instructor, and where Philip Rogers previously served as the chief of staff from 2008-13.

"I want people to know that Philip and I feel called to this role," she said. "I really understand the culture here. I understand the people here and I get the vision of the university."

Rogers has been a positive representative of ECU throughout her life, from student to graduate to employee, and each experience prepared her for coming back to Greenville in this new capacity.


'I was only allowed to apply to ECU'

Rogers grew up in a family of Pirates. Beginning with a relative who attended the university when it was East Carolina Teachers College to her father, uncle and sister, her family is full of passionate alumni.

"If there was a home football game growing up, our family was there," she said.

The dedication runs so deep that the day after Rogers was born, her father, David Page, left his daughter and wife in the hospital in their hometown of Greensboro and went to the ECU game in Raleigh. 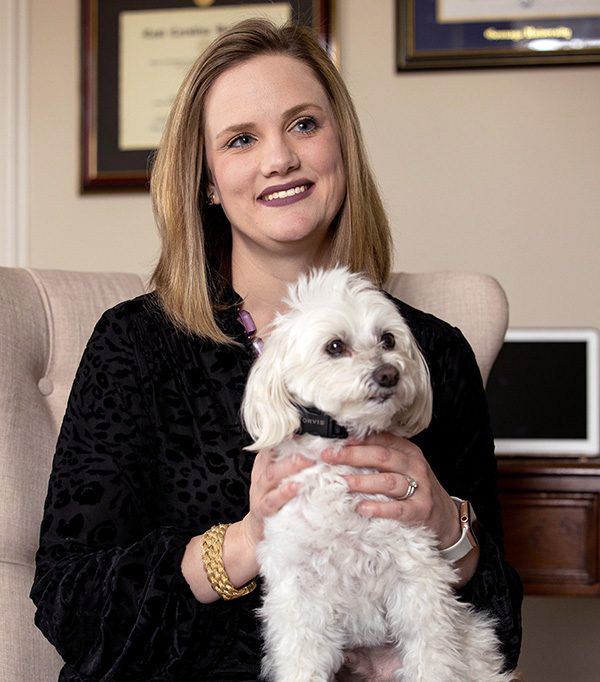 Fun fact: Growing up, Rogers and her family brought the cannon that was fired after every touchdown to ECU football games.
"It was a big game against NC State," Page said, adding that his wife, Nancy, approved.

Prior to COVID-19, Page said he missed only six home games 35 years. Part of that dedication stemmed from the responsibility of bringing the cannon to games. On the way into town, Page would pick up his friend Ken Howard, who built the cannon, and deliver both to the field.

"We couldn't miss a game because then the cannon wouldn't be fired after every touchdown," Page said. (In 1999, ECU began using a new cannon at football games and transferred its care to the Army ROTC.)

It's not surprising then, that ECU was the only choice for Rogers. She majored in psychology and minored in classical studies, graduating in 2007. While a student, she was part of ECU Ambassadors, the group that serves as official hosts of the university, leading campus tours and helping with large events. After graduation, Rogers' first job was working for the admissions office. For a year, she traveled up the coast from North Carolina to Connecticut visiting high schools and college fairs, convincing students attend ECU.

"I was by myself with my suitcase and state van and all my ECU materials; it was a really rewarding experience," Rogers said.

"Rebekah's dedication to ECU and our mission to serve was evident at that time as she was deeply committed to her students, the School of Communication and ECU," Prividera said.

"Rebekah is a wonderful person, and I am thrilled to welcome her back as one of our treasured Pirates! Her commitment to ECU began long ago and it is amazing to have my colleague return!"

Rogers plans to teach classes again at ECU next spring. She said she loves teaching undergrads and considers herself a mother figure as much as a teacher to them.

"My job is not only to teach the material but to instill confidence in students that they can do whatever they want to do. I see myself as a cheerleader for them," she said.

Rogers met Philip at church in 2006. Their personalities are opposite. Philip is a Type A planner, while Rogers describes herself as "so Type B." They married in 2009 and have two boys, Grayson, 5, and Dean, 2.

When Philip Rogers was chief of staff of ECU, he was responsible for external relations for the university, including government relations, marketing and communications, public service, and policy development. He is also a native of Greenville. When he left his ECU post for a job with the American Council on Education, a nonprofit organization that helps institutions navigate challenges in higher education, he and Rebekah moved to Alexandria, Virginia.

In Alexandria, Rebekah Rogers pursued a Ph.D. in leadership studies from Gonzaga University while Philip Rogers got a doctorate in education from the University of Pennsylvania. At ACE, he built a reputation of energy and optimism and was viewed as someone with a deep understanding of higher education. In a nutshell, he was everything ECU was looking for in its next chancellor.

"I have complete faith in Philip. I'm not sure there's anyone that could be doing this job right now," Rebekah Rogers said. "We both want to lead this university with a servant's heart. Knowing that the motto for ECU is servire, we want to continue that purpose. We love and believe in ECU's motto."

Rogers is excited to be back in Greenville, a place that feels like home to her. She's excited for the future of ECU and is clear-eyed and hopeful about stepping into the role of chancellor's wife.

Her friendly demeanor makes her easy to relate to, and she can carry a conversation with anyone. One chat with her can span topics from signing up her son for Little League to leadership philosophy to health care to the antics of her lap dog Walter, who follows her around the house like a shadow.

"She is open and has a huge heart. She is also very determined. When she wants to get something done, she puts everything into it. I'm very proud of her," Page said of his daughter. "I'm biased but I think she and Philip are a great fit for the university. They will be a great team."

Rogers wants people to know that she and Philip feel a sense of purpose in returning. From their Greenville ties to their commitment to ECU's mission, they are ready to take the helm of the university as servant leaders, she said.

"I never thought I'd be sitting in this position. But looking back on our journey, we're ready to do it."
Go Back