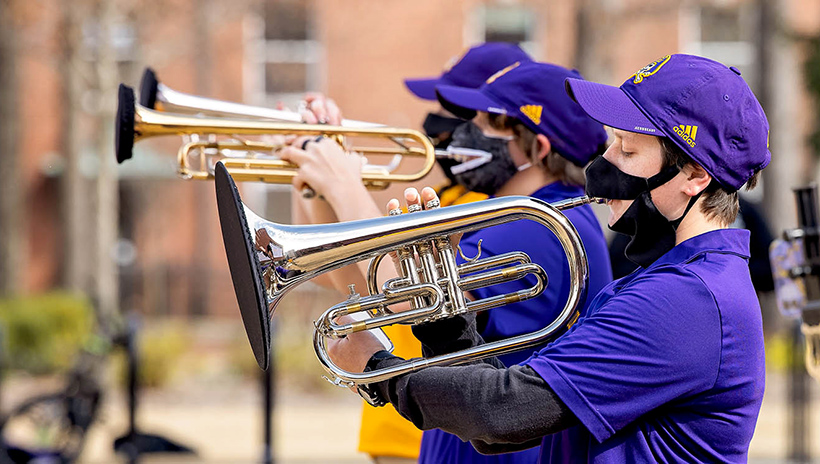 Pirate Nation got a small taste of normalcy last week as students, faculty and staff, and alumni celebrated Home Sweet Homecoming with a week of on-campus and virtual events and activities.

Dr. Philip Rogers, East Carolina University's 12th chancellor, helped kick off the event by taking the mic during Cannonball Kickoff, the official start of homecoming week, which also featured the Marching Pirates and the ECU dance team. The timing was appropriate, he noted, as his first official day on the job coincided with the start of homecoming. 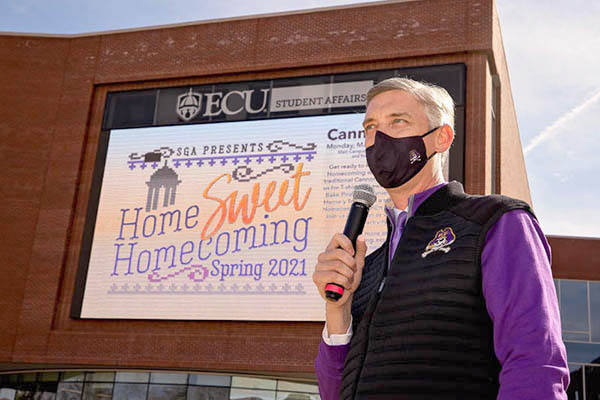 Chancellor Philip Rogers said it was fitting that ECU’s homecoming celebration coincided with his first day on the job.
"It feels so good to be back," said Rogers, who previously served as ECU's chief of staff before moving to Washington, D.C., to work with the American Council on Education. "Homecoming means so many things to so many people. ... Homecoming, to me, means all generations of Pirates — young, seasoned, from all different places around this region, state and country — coming together to celebrate this great university that we love.

"Homecoming to me means celebrating, remembering and cherishing the great friendships and the authentic and meaningful relationships that we develop as a part of this institution."

The kickoff event included an interactive screening of Beyonce's film "Homecoming," a trivia competition and a Pirate Pies cookalong with Gwendy's Goodies of Ayden.

Junior Ariel Lineberger, an environmental engineering major, said she was glad to have some on-campus activities to share with her friends. She planned to come back to the Main Campus Student Center for the movie screening and to participate in the canned food drive later in the week.

"It's just a way for me to get involved and do something to give back," she said.

Tuesday's scavenger hunt, hosted on the Scavify app, featured options for Pirates on campus or participating remotely. The day brought heavy rain, but that didn't stop dozens of eager hunters from checking in at campus landmarks, answering trivia questions and filming themselves singing the fight song and telling Pirate jokes.

Do you know why Pirates are slow to learn the alphabet? It's because they spend so long at "C."

Matthew Overby, a young Pirate who picked up a homecoming T-shirt at the kickoff event with his mom, said there are three reasons he loves ECU.

"First of all, that's my mom's school," he said. "Second, it's the Pirates, and my school is also Pirates. And I like to come for lots of movies every year."

Throughout the week, students participated in a series of competitions for the Spirit Cup. They filmed skits, made banners, collected canned food and decorated golf cart "floats." This year's Spirit Cup winners are: 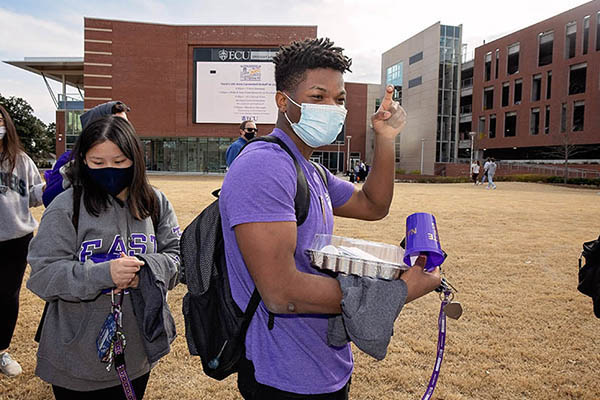 Students pick up swag outside the Main Campus Student Center during Cannonball Kickoff.
ECU students voted more than 50,000 times via Instagram Stories for the bracket-style skit competition, said Emily Waters, adviser to the student homecoming committee. They also collected and donated more than 17,000 pounds of food to the Food Bank of Central and Eastern North Carolina.

This year, for the first time, the traditional homecoming king and queen were replaced by the Captain of the Ship. The top 10 candidates were selected by the committee, and students had the opportunity to vote for the winner. This year's Captain of the Ship is Tiffany Robertson, who said she joined the competition for the opportunity to represent the university she calls home.

"I am so thankful for all the work that everyone put into homecoming this year to allow us to have in-person and virtual events," she said. "It was a breath of fresh air after being virtual for so long. Each event was well planned and so much fun to participate in!"

Robertson, a member of Kappa Delta, said her favorite event was the banner competition.

"It was so much fun seeing how much work each group puts into homecoming," she said. "It really shows how much Pirate pride surrounds our campus."

As the week of homecoming events wound down, the ECU baseball team did its part to boost school spirit by completing a weekend sweep of the Illinois State Redbirds.

For more information and photos of the festivities, visit HERE or the ECU Homecoming Facebook page.
Go Back