Published: Thursday, August 9th, 2012 @ 2:24 am
By: John Locke Foundation   ( More Entries )
Publisher's note: The author of this fine report is Barry Smith, who is a contributor for the Carolina Journal, John Hood Publisher.

Speakers line up Tuesday to address the Wilmington City Council hearing on a bond referendum that would fund a baseball stadium.

WILMINGTON     The City Council voted unanimously Tuesday night to place a $37 million bond referendum on the Nov. 6 ballot. If voters approve the bonds and all goes as planned, a Class A Atlanta Braves affiliate could begin playing in a 5,500-seat riverfront stadium by 2014.

"This is going to be a decision of you the citizens," Mayor Bill Saffo said following a public hearing that lasted about an hour and preceded the unanimous vote.

The council approved the bond referendum even though a final memorandum of understanding has not been completed with Mandalay Properties, which manages other Braves affiliates and would manage both the stadium and the minor league team in Wilmington. City officials said they hoped a final agreement could be worked out by the council's September meeting. 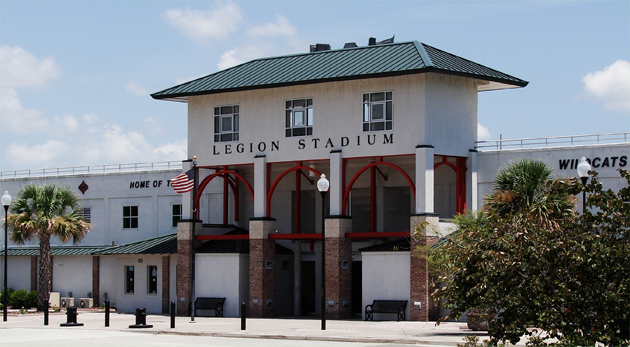 Legion Stadium, near downtown Wilmington,may be the single biggest reason why a 40,000,00 bond referendum is son unpopular in New Hanover County. Currently, the stadium is the home for the Wilmington Hammerheads (soccer) and the Wilmington Sharks (minor league baseball). It is in good condition, and comfortably seats 6,000 fans: Above.     photo by Stan Deatherage

Among the Wilmington residents speaking in favor of the proposed ballpark was Margaret Stargell, the widow of Pittsburgh Pirates legend and Hall of Famer Willie Stargell.

Attorney Clay Allen Collier told the council that Wilmington didn't need a minor league team since it already has the Wilmington Sharks, a summer college team that plays in the Coastal Plain League.

"Folks, baseball in Wilmington is here," Collier said. He said 55 players who have played in the Coastal Plain League have made their major league debut.

Stadium opponent Ben McCoy argued against Mandalay's business model, which he described as: "Give us money so we can make money and whatever kind of spinoff you're going to get from our facility, be thankful for that."

He said the 2.5 cent tax increase would hurt a lot of people.

Supporter Jim Hundley, chairman of the Wilmington Ballpark Coalition, said that the city has "an incredible opportunity before us." He said a minor league ballpark would bring people downtown to spend money in stores and restaurants.

Throughout the public hearing, supporters emphasized that the council was not voting to spend the money, but put the issue before the voters.

If a recently released flash poll by the Civitas Institute is any measure, supporters have their work cut out for them in convincing Wilmington residents to support the stadium bond referendum.

The poll found that 23 percent of Wilmington voters considered building a stadium was either a high or medium priority, while 22 percent considered it a low priority and 54 said it was not a priority.

The Wilmington club would be the same franchise that operated in the high Class A Carolina League as the Durham Bulls from 1980-97. The team left Durham when the expansion Tampa Bay Devil Rays placed its AAA International League affiliate in Durham and kept the Bulls name. The current Carolina League Braves team plays in Lynchburg, Va.

Barry Smith is an associate editor of Carolina Journal.

Editor's note: The Civitas poll found 80 percent opposition to a fully tax-funded stadium. This story was corrected to reflect that information.
Go Back