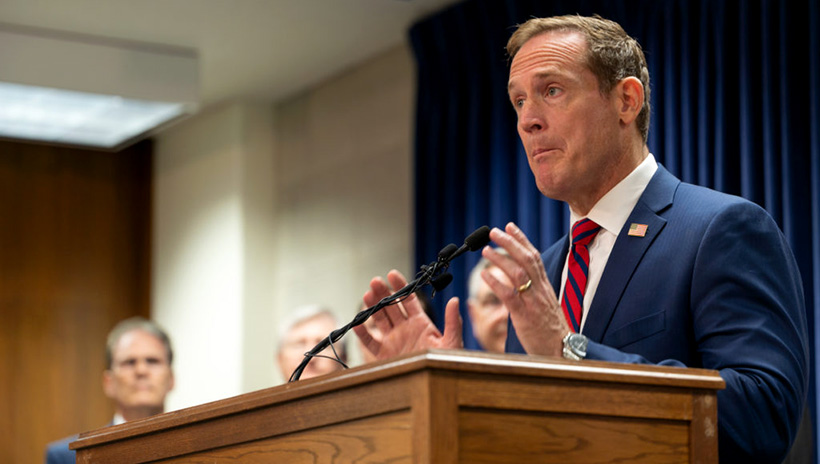 "The Ted Budd for US Senate campaign today released survey results that reveal Ted Budd sees a 45-point net positive swing and surges to a 19-point lead when likely Republican primary voters learn that President Donald Trump has endorsed Ted Budd for US Senate," according to a news release from the Budd campaign.

McCrory gets 45% of primary support, compared with 19% for Budd and 12% for former U.S. Rep. Mark Walker. Some 23% of those polled remained undecided. (An April poll conducted for McCrory listed support for the former governor at 48%, with Walker at 13% and Budd at 9%.)

"Budd is the only candidate who has seen his ballot number grow in the past two months — more than doubling, in fact," said Rob Autry of Meeting Street, in a memo promoted by the Budd team.

Just 20% of those polled knew that Trump had endorsed Budd during a June 5 speech to the state Republican Party convention in Greenville. Once voters learned that fact, support in the race flipped to Budd.

"When we asked Republican primary voters for whom would they vote if they knew 'President Donald Trump spoke at the North Carolina Republican Party's convention this past weekend and announced that he was endorsing and supporting Ted Budd for U.S. Senate,' Ted Budd surges to a 19-point lead over McCrory and a 38-point lead over Walker," Autry said.

With information about the endorsement, 46% of those polled supported Budd, while 27% supported McCrory. Walker's support dropped to 8%. The percentage of undecided voters dropped to 18%.

"This one piece of information turns McCrory's 26-point lead into a 19-point deficit," Autry noted.

"Trump's endorsement pushes Budd to a 25-point lead among core primary voters (Base Republicans who are very conservative) and puts him 11 points ahead of McCrory in the former Governor's region base, the Charlotte media market," according to the memo.

The latest poll shows all three major candidates for the Senate nomination have positive favorability scores.

The poll also tested the former president's Republican convention comments about the 2022 race. The survey asked voters whether they agreed with Trump that "you can't pick people that have already lost two races and do not stand for our values."

Two-thirds of voters (67%) agreed, with 47% "definitely agreeing." More than two-thirds of undecided GOP primary voters (68%) agreed with the former president.

Trump didn't name McCrory, but his comments have been interpreted to refer to the former governor. McCrory lost statewide elections for governor in 2008 and 2016.

The Meeting Street poll used a mix of cell phone and landline interviews. It has a margin of error of plus or minus 4.38 percentage points.
Go Back