NAACP Accuses Auditor, Senator of Racism Amid Corruption Probe | Beaufort County Now | “The truth is that Beth Woods and Lisa Barnes, a Democrat and a Republican, are operating tactics and strategies out of the old 1898 racist playbook.”

Published: Thursday, July 8th, 2021 @ 10:52 am
By: Carolina Journal   ( More Entries )
Publisher's Note: This post appears here courtesy of the Carolina Journal. The author of this post is Dallas Woodhouse. 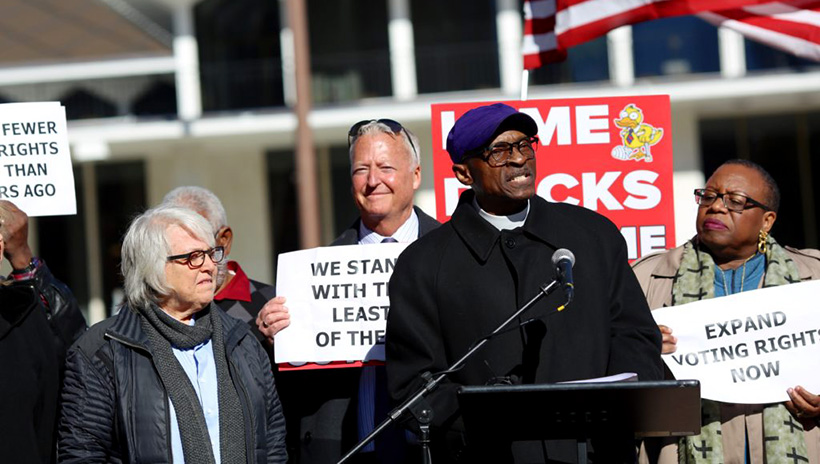 The president of the state chapter of the NAACP is leveling accusations of racism and white supremacy against auditor Beth Wood and state Sen. Lisa Barnes, R-Nash, over Wood's investigation of corruption in the Rocky Mount City Council and Barnes' proposed legislation intended to address it.

"The truth is that Beth Woods and Lisa Barnes, a Democrat and a Republican, respectively, are operating tactics and strategies out of the old 1898 racist playbook," state NAACP president Anthony Spearman wrote in a memo posted on the group's Facebook page and sent to the N.C. State Conference of Branches of the NAACP.

Wood's investigation, conducted by the Office of the State Auditor, found that multiple city officials prevented efforts to collect $47,704 in utility bills owed by council member Andre Knight. Records show the councilman's debt was wiped clean by the city-run utility system, with direct involvement from the city manager's office. The story was reported by Carolina Journal in May 2020.

"The former City Manager then instructed the Finance Director to handle the council members' account. The city provided no evidence that any other customer had their outstanding utility accounts handled in this manner," the investigation report says.

The state's investigation found other indications of corruption including:

The audit was conducted after more than 200 complaints to the auditors' corruption hotline.

"That's an attempt to break the black majority in this city we have fought very hard for," Knight said in an interview with WTVD.

Knight called into "The Morning Show" on WHIG-TV on Monday, June 28, to confront Wood, implying she's racially biased against him, comparing the investigation to people who have been falsely incarcerated.

"It's a lie," Knight said. "Everything she put in that report was not true. Look how many people have been incarcerated on lies that district attorneys told on people, especially people of color, and they had to serve 20 to 30 years."

Shortly after the audit, Knight was greeted at an emergency City Council meeting with signs, reading, "Crooks on the Council," and "Andre Will Leave The Lights on For You," according to published reports.

Knight told local press he has evidence of his innocence, but after a full year has failed to produce any. His supporters showed up at the May 2020 City Council meeting wearing hats that said, "Make City Hall White Again."

After the audit, Wood's popularity soared in the county so much that she was its top vote earner in 2020, receiving more votes than President Biden and Nash County native Gov. Roy Cooper, who both also won the county.

In an interview with CJ, Wood mostly ignored the accusations of racism, saying the facts speak for themselves.

"Everything we have in our reports is backed by evidence," she said. "In this case, all the evidence exists in the city of Rocky Mount. Elected officials are supposed to be public servants, not using their position of authority and the public trust for personal financial gain. I am going to do my job. I don't care about the age, the race, the color, or the political party. I don't care."


Barnes advances legislation designed to crack down on corruption

Senate Bill 473 is designed to prevent corruption in cities and towns across the state, similar to what the auditor's office says it uncovered in Rocky Mount.

"No public official shall participate in making or administering a contract, including the award of money in the form of a grant, loan or other appropriation, with any nonprofit with which that public official is associated," the bill states.

S.B. 473 sailed through the state House Judiciary Committee after it was overwhelmingly approved in the Senate.

"This legislation is an attempt to give more teeth to the State Auditor's Office when negative findings are reported," Barnes told CJ. "It's about right and wrong. Government and elected officials should not be given preferential treatment and they should not be allowed to use intimidation or undue influence because of their position. I question why anyone would oppose a more open & transparent government."

"We have to ensure a high level of transparency, integrity, and accountability of local government institutions so people have faith in those who are governing them and spending their hard-earned tax dollars."


The NAACP alleges Woods and Barnes are acting as white supremacists

This week, Spearman compared Wood and Barnes to violent white supremacists who overthrew the black Republican municipal government in Wilmington a century ago.

"The truth is that Beth Woods was summoned to Rocky Mount by a network of white nationalists who conspired with City employees who have been infuriated with the appointment of senior-level Black City officials." wrote Spearman, saying the two have "created a bipartisan effort to stop the will and the impact of the Black vote in Rocky Mount."

"The N.C. NAACP has carefully followed the frequent visits that State Auditor Beth Woods has made to Rocky Mount to defend her position. She lunches and chats with well-known Trump sympathizers which is her right," his memo reads.

Spearman also accuses Wood and Barnes of targeting "Rocky Mount to be this century's Tulsa, OK," apparently referring to the 1921 Tulsa race massacre, when mobs of white residents, attacked black residents, destroying their homes and businesses in the Greenwood District. It's considered one of the worst incidents of racial violence in American history.

State Rep. Shelly Willingham, D-Edgecombe, has previously accused Wood of racial animus, saying, "There appears to be a pattern of individual assassination of black individuals' character and a personal attack made on black leadership who were duly elected by the citizens and justifiably appointed by the City Council. ...

The Rocky Mount Black Action Committee posts a parody picture of Barnes and Wood with the headline, "Senator and auditor team up to beat back black power."

The action committee has close ties with the BLM movement and two of the accused City Council members. The group posted an image of Wood and Barnes in a parody of the famous 1930 painting American Gothic, which depicts a farmer standing beside his daughter holding a pitchfork.

If S.B. 473 becomes law, most of its provisions can't be applied retroactively to the allegations in Rocky Mount and would not remove current officials from office. Wood says she's turned over information on city official malfeasance to the IRS.

"The NAACP cannot credibly challenge any of the provisions S.B. 473, so now they go after the good names of Senator Barnes and Auditor Beth Wood," Nash County GOP Chair Mark Edwards told CJ.

The bill got 2-to-1 support among the Democrats in the Senate.

"The NAACP owes Auditor Wood and Senator Barnes an apology. I can only hope Democrat Party Chair Bobbie Richardson and other Democratic leaders will call on the NAACP to withdraw their nasty and baseless accusations about these two public servants," Edwards said.
Go Back