The Origins of Labor Day | Eastern North Carolina Now | The origins of labor Day are rather dubious, born from congressional guilt of Americans shot down, by the Army and U.S. Marshalls, while exercising their first amendment right to congregate and protest during the Pullman Strike in Haymarket Square in Chicago on may 4, 1886.

The Origins of Labor Day

Login to Send a Private Message to Stan Deatherage
The origins of Labor Day are rather dubious, born from congressional guilt of Americans shot down by the Army and U.S. Marshalls, while exercising their first amendment right to congregate and protest during the Pullman Strike, in Haymarket Square in Chicago on May 4, 1894, was signed into law during the Grover Cleveland Administration, with the first holiday celebrated on the first Monday in September, 1894. As dubious as the origin of the holiday, was the origin of who killed whom during this Haymarket Massacre, where a bomb explosion and the resultant gunfire killed 4 protesters and 7 officers of the law during this protest to advocate for the eight hour day.

The Pullman Strike occurred at the height of the origins of the labor Movement in America, where the oft referred to "Robber Barons" of the "Gilded Age" of American wealth creation, as America's wealthiest men and some of the richest in the world, competed with one another to see who could amass more wealth. These wealthiest Americans: J. P. Morgan (finance, industrial consolidation), Andrew Carnegie (steel), John D. Rockefeller (oil), Cornelius Vanderbilt (transportation, especially railroads), considered each other's wealth as an adversarial component to their ever-encompassing competition to best the other's financial position by building astounding sums of wealth, often at the expense of their workers, skilled and otherwise. 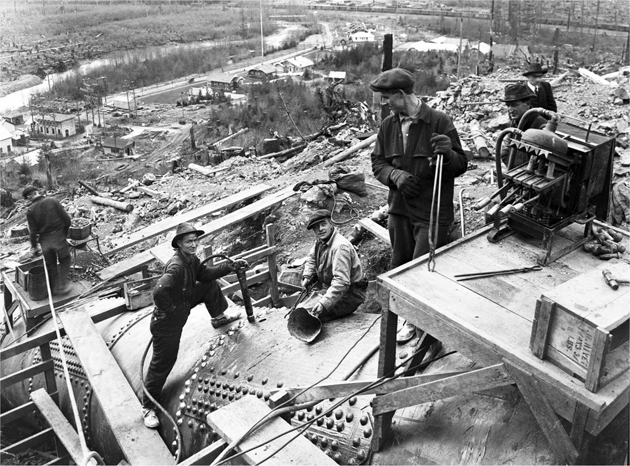 Men constructing the Cedar Falls Hydro-Electrical Plant in 1921: Above.

These were fertile times, not only for the creation of staggering wealth, but for the origination of labor unions, which began for a reasonable purpose then, but have, for all practical purposes, outlived any purposeful existence now. These Robber Barons, and especially Cornelius Vanderbilt in this case, who sowed these strong seeds of extreme discontent with his ill-conceived greed in cutting the pay of his rank and file Pullman servants (Pullman Strike), to better compete with these upper echelon masters of wealth: Carnegie, Morgan and Rockefeller, may have been solely responsible for congress's rush to provide the American population with this new found holiday in that summer of 1894 - our labor Day.

While these Robber barons were basically smart and hardworking, they were men that were competitive to a fault, who made great sport of amassing wealth. They were remarkably just as competitive with each other in their dispensation of that wealth to charitable trusts that still honor their names to this day. While many will appreciate the good deeds of their various charitable trusts, there will be even more Americans, who appreciate their (Robber Barons') unintended day off that their actions did most adequately facilitate.

Now you know Stan's version of how we wound up with the American holiday of Labor Day.
Go Back