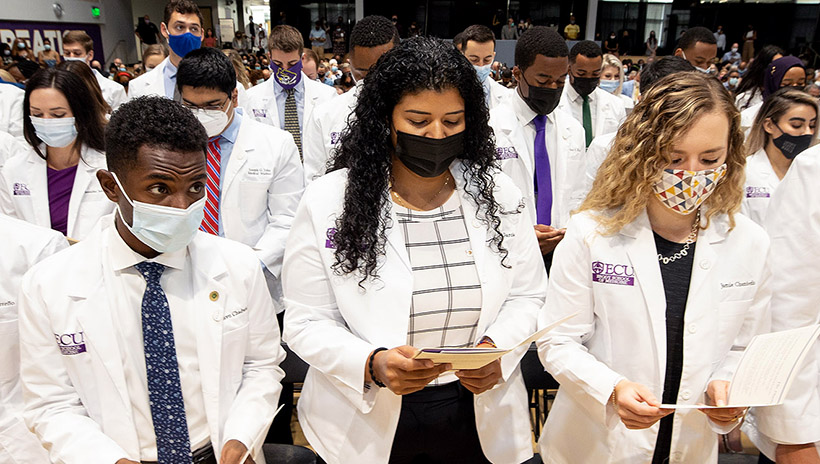 Students in ECU’s Brody School of Medicine Class of 2025 recite the Physician’s Pledge after receiving their white coats during a ceremony on July 30. The tradition marks the official start to medical school for first-year students. | Photo: Rhett Butler

The Brody School of Medicine at East Carolina University officially welcomed 86 new medical students — the most diverse class in the school's history — during the school's annual White Coat Ceremony on Friday morning.

In front of a gymnasium full of approximately 700 family, friends and Brody faculty, the students were presented with the white coats they will wear in patient care areas throughout their time at ECU.

In his first White Coat Ceremony in his joint role as dean of the Brody School of Medicine and CEO of Vidant Health, Dr. Michael Waldrum congratulated the students for joining a medical school actively improving health in eastern North Carolina, one that embraces diversity to increase opportunity and decrease disparities and is training physicians who stay in North Carolina and serve in North Carolina, particularly in primary care and rural and underserved communities.

"It's for North Carolina, by North Carolina. That's the secret sauce," Waldrum said. "We know that you're committed to that mission and to carry the Brody tradition forward. It starts today with receiving your Brody School of Medicine white coat and extends into the future of your lifetime. That future is full of incredibly hard work, and it should be, because nothing of meaning comes easy. But also know that you can do it; we chose you because we know you can do it." 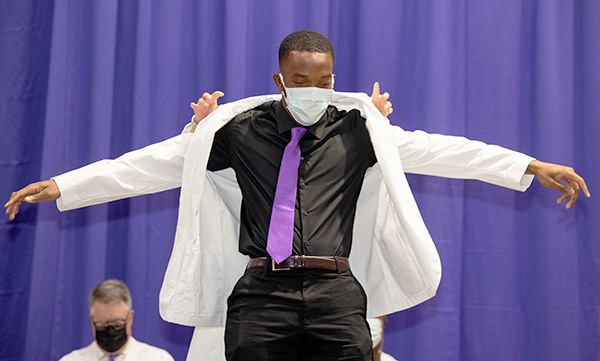 Obumneke Umerah, a first-year student in the ECU Brody School of Medicine, is helped into his white coat during the school’s traditional ceremony on July 30. The event marks the beginning of medical school for the Class of 2025. | Photo: Rhett Butler
All of the first-year medical students are North Carolina residents, who hail from 32 different North Carolina counties, and were chosen from a field of 1,220 applicants — also a record number for the school.

The class is 56% female, and 35% of the class are from groups the Association of American Medical Colleges considers to be underrepresented in medicine — Black, Hispanic and Native American. Nearly 30% of the students reported being from disadvantaged backgrounds and 16% are first-generation college students. Class of 2025 members also speak 19 languages, in addition to English.

Obumneke Umerah, a Fayetteville native whose parents are Nigerian immigrants, said Brody's commitment to diversity is not only important to him, but to the patients he will one day serve.

"There are patients and people from all different backgrounds in medicine. And if we make up a greater portion of health care, we'll be able to better reflect the patients that we serve, so there is no disconnect and the patient-physician relationship gets stronger," Umerah said. "So, it is great to be part of a class that is helping to close that gap." 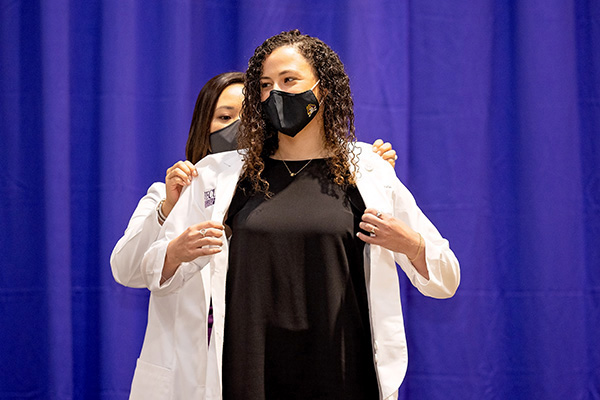 Brody Scholar Dana Shefet, a member of the ECU Brody School of Medicine Class of 2025, is helped into her white coat by Dr. Amanda Higginson, interim associate dean for Student Affairs, during the school’s annual White Coat Ceremony on July 30.
While the class is diverse, it is the desire to serve others — particularly people in rural and underserved communities — that bonds them.

Cary resident Dana Shefet said that she has been drawn to the Brody School of Medicine and its mission since she first arrived at ECU as a 17-year-old undergraduate. Four years later, Shefet was one of four Brody Scholars to receive their white coat on Friday. The Brody Scholars Program is North Carolina's most distinguished medical scholarship. It provides full tuition and fees and most living expenses for four years of medical school, allowing scholars to choose a medical specialty without the worry of debt after graduation.

"I really believe that ECU's mission goes beyond the two lines on their website," Shefet said. "They really believe in who they serve and what they do. I was able to see that through my undergrad work and my undergrad experiences serving the Greenville community. I am very excited to continue that and immerse myself into this community as a Brody Scholar."

As is the case for all of the first-year medical students, it is too soon to tell what specialty Shefet will choose to practice. However, she is starting her medical education with a strong interest in family medicine and a desire to serve people in the East.

"One of the things I learned through shadowing ECU physicians as an undergraduate is that patients are more than just their current illness; they put into consideration a lot of different factors, such as geographical barriers to access to care," she said. "This is something that I've been able to see, that the power of the white coat in these communities is immense because sometimes that is the only physician in the area around them. So, I think being able to see the appreciation and need for physicians in this area, compared to my hometown of Cary, really solidified that this is where I hope to be."

North Raleigh resident Liban Abdikarim was making a meaningful impact on the health of others long before getting his white coat.

As a high school student, Abdikarim and his mother, Asili Hashi, helped to build a 100-bed hospital in Gedo, Somalia. 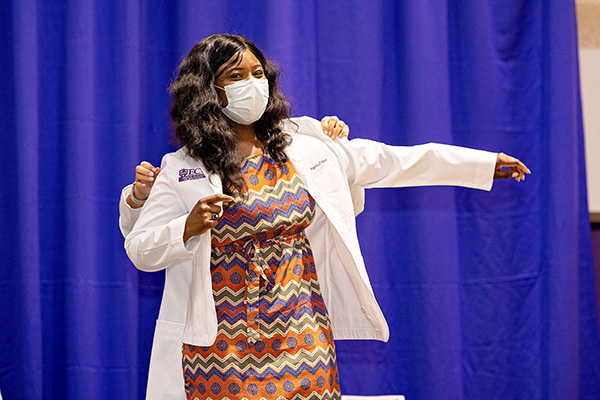 Anjelica Mack receives her white coat during the Brody School of Medicine’s annual White Coat Ceremony, when first-year medical students receive the coats they wear in clinical spaces. Mack’s sister, Jessica Mack-Gill, is also a member of the class. | Photo: Cliff Hollis
"In 2007, my mom's sister passed away from cholera, which is a treatable disease but in the rural town that she is from there wasn't the necessary health care facilities to treat her. So my mother and I created an organization called Gedo Relief, and over the period of five years or so of fundraising and putting out flyers and traveling to China, we were able to build a fully functioning hospital there with over 100 beds," Abdikarim said.

Abdikarim said he is looking forward to the day when he has enough medical training to visit Somalia and serve patients in the hospital he helped create. But on Friday morning, he was thrilled just to finally put on a white coat.

Sisters Anjelica Mack and Jessica Mack-Gill, of Winston-Salem, took different educational journeys before their paths converged again after they each independently chose to pursue medical school. The two studied for the MCAT — the national exam for prospective medical students — together and supported each other through the process of applying to Brody. Their family joined them at the White Coat Ceremony to see their collective efforts come to fruition.

Mack and Mack-Gill, who both earned undergraduate degrees at Howard University, already know they want to stay in North Carolina to practice as physicians, most likely going "where there is a need," Mack said. "I really want to serve in underserved communities." 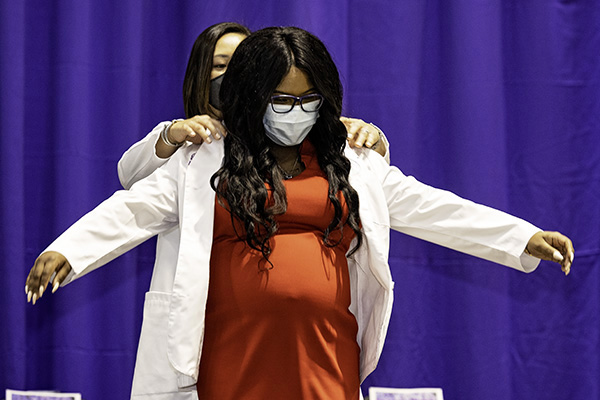 Jessica Mack-Gill receives her white coat during the Brody School of Medicine’s White Coat Ceremony on July 30. Jessica and her sister, Anjelica Mack, are both members of the Brody Class of 2025. | Photo: Cliff Hollis
Brody was a perfect fit for both sisters, they said, because of the family atmosphere.

"As soon as I interviewed here, it was like, there's no competition," Mack-Gill said. "I felt at home. It really felt like a family."

Both Mack and Mack-Gill said the fact that they will be going through medical school together adds even more meaning to that atmosphere.

The sisters don't foresee any friendly competition as the years go by; instead, they plan to stand together through it all.

"I don't think we're competitive," Mack-Gill said. "I think we more so just encourage each other, so whenever she sees I'm slacking, she'll tell me, 'Sis, pick up the pace,' or whenever I see she needs to pick it up, I'll let her know.

"We keep each other on our toes."
Go Back