Pirate Attack Offers Versatility | Beaufort County Now | With an interesting mix of experience and youth, the East Carolina soccer team will have a lot of options in both the midfield and attack 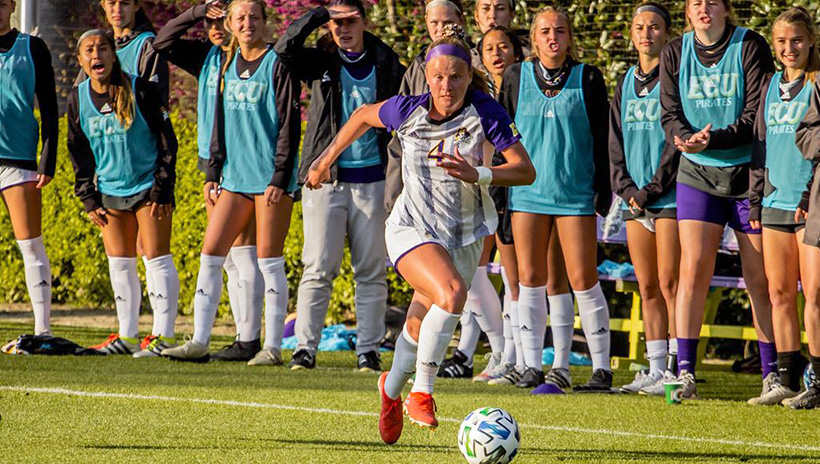 GREENVILLE, N.C.     With an interesting mix of experience and youth, the East Carolina soccer team will have a lot of options in both the midfield and attack as the Pirates look to reach the postseason for the third time in four seasons.

In the midfield, the Pirates will bring back Alexia Moore, who has been a consistent starter in her three seasons in the Purple and Gold. Moore has started 32 of the 41 games she has appeared in since arriving from NC State in 2018. The Jacksonville, N.C., native has one assist in her ECU career and has been key in the defensive midfield role.

Along with Moore, Grace Doran, Sierra Lowery, Brooke Burzynski and Catherine Holbrook all return with experience in the starting lineup. Lowery provides versatility to the Pirate lineup, able to play both in the midfield and on the defense and gained experience by starting five games last spring, including playing the entirety of matches against Temple and South Florida. Doran did not get on the scoresheet last season, but scored three goals in 2019 and was named to the AAC All-Rookie team in 2018. Holbrook appeared in all 11 games in the spring and scored her first collegiate goal in ECU's win over Tulsa. Burzynski appeared in 10 games during her rookie season, starting a pair of them.

The midfield will also get an injection of youth with Molly Thomas, Adison May, Haley McWhirter and Holly Schlagel. May, McWhirter and Schlagel all gained experience last year, with May playing in a pair of games during the spring while McWhirter and Schlagel joined the team in January and were limited to training due to NCAA Covid-19 policies. Thomas finished her prep career after helping Spring-Ford win a conference championship and was a three-time All-Conference selection. McWhirter tallied more than 100 combined goals and assists in her three seasons playing for the Houston Dash Academy in the Top-Drawer Development Academy League and earned multiple invites to the US Market Training Center. Schlagel was a three-time Colorado state champion and also spent time at the US Training Center.

"This group will be less experienced as a whole than what is in front or behind them, but with the amount of talent they bring they should be very solid," explained Hamilton. "Again, another group where the depth we have should allow us to be successful and adaptable to what each game may call for. We do think that this group will help us offensively, not only with their ability to score goals, but also to create opportunities for those around them. There are a lot of players that want to get on the ball in this group, this will help us to get out of things, keep the ball, and alleviate pressure for their teammates."

East Carolina has a front line that will pose many different problems for opponents this fall, headlined by the leading scorers in both 2020 and 2019. Carsen Parker spent the majority of her career as a center back, but a midseason move to center forward saw her excel and finish as the team's leading scorer in 2020 with four goals, including a pair of game-winners, and three assists. The other experienced forward on the roster is Tori Riggs, who has been a consistent goal threat since 2017. Riggs has eight goals and seven assists in her career, including setting a career-high with four goals and two assists in 2019, which led the Pirates.

Annabelle Abbott returns after earning a spot on the AAC All-Rookie team last spring. Abbott finished the year with a goal and an assist while starting all 11 games. Her classmate, Sydney Schnell, played in nine games during her freshman season and had an assist against Tulsa. Morgan Everett is another returnee, with Everett appearing in eight games in her first season in Greenville after arriving from Louisville.

After injuries limited her early in her career as a Pirate, Taylor Kibble is ready to return to the level of play that saw her named the Conference, Region and Virginia State Player of the Year after scoring 51 goals and adding 26 assists during her junior season at Loudoun County. Rachael Wilsynski did not appear in any games during her rookie campaign, but captained the Baltimore Armour to the Maryland State Championship during her prep career, scoring 16 goals.

Samantha Moxie, Izzy Lusardi and Peyton Godbey will also be options in their first collegiate seasons. Moxie scored over 100 career goals in her prep career and lead Edison to a pair of New Jersey state championships. Lusardi was a consistent scorer for the North Carolina Courage, helping the Courage qualify for the US Soccer Champions League and finish in the top-eight in the league in 2019. Godbey will contribute both as a defender and as a forward. Up front, she scored 58 goals in two prep seasons and earned multiple invitations to the US Training Center. Schlagel will also be a potential contributor as a forward, in addition to her skills in the midfield.

"We will have a lot of options this year in regard to our forward positions," added Hamilton. "This is an area we want to become much improved as a team compared to years past. The ability to be a multiple goal threatening team per game will put us in a much better position to win more games. We have some players that will bring a little more pace than what we had in the past giving us the opportunity to stretch teams at times. They also bring a creative ability with an attacking mindset to take players on and create chances. Lastly, we have some in this group that can strike from distance which is just another threat to bring to the table."

The Pirates will get their first taste of game action on Aug. 10 with an exhibition at Longwood before playing in Johnson Stadium on Aug. 14 in an exhibition against UNCW. The season officially gets underway on Aug. 19 with a trip to Old Dominion before the home opener against VMU on Aug. 22.
Go Back