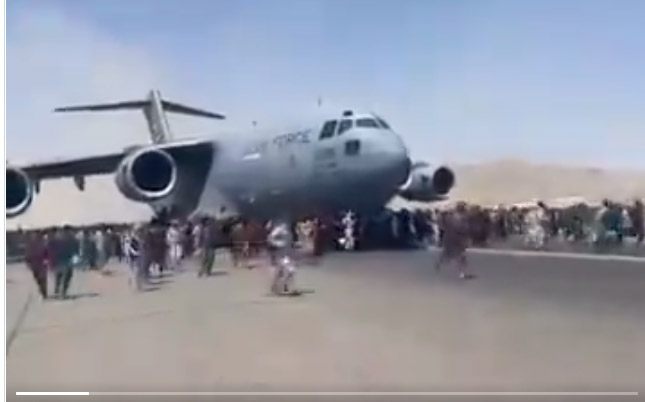 While Joe Biden and most of his staff is out of the office on vacation a literal disaster is unfolding in Afghanistan as the Taliban take over the country.  And it is just beginning.

We are being presented with pictures of horror and desperation as Afghans, many of whom worked with American forces for years, are desperately trying to get out of the country.  Hundreds have swarmed the Kabal airport and tried to force their way onto American aircraft that were evacuating those they could out of the country.

You can watch video is this tragedy unfolding at this link.  We warn the faint of heart that the scenes are gruesome, with some falling to their death from hanging onto planes as they took off.

Meanwhile, from the Commander-In-Chief:   crickets.

The Pentagon has sent approximately 6000 marines to the country to assist with the evacuation and deal with the unnecessary chaos.  It should be noted that there were only about 3500 American troops in Afghanistan in May when the pullout was announced.

Thus far, we have heard of no Top Dogs being fired over this debacle.  Only everyone blaming someone else.

It is a sad commentary on the current General Staff of the military and the intelligence agencies whose job it is to foresee such events and warn those in charge.  Instead, we rush 6000 marines in to do a job nobody should be asked to do.  More than that, it is a sad, sad day for America.  Whether or not you agree with our sending troops to Afghanistan or not, the issue now is why this pullout was handled so poorly.