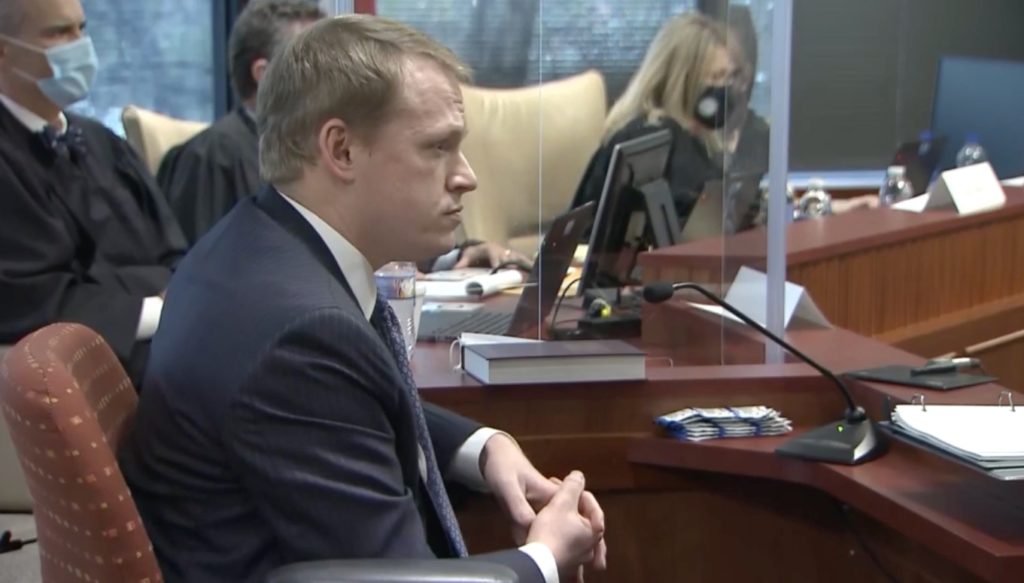 
Two leaders of North Carolina's legislative redistricting committees defended their election map-drawing process during the third day of a trial focusing on the future of those maps.

Closing arguments in the trial are scheduled Thursday morning.

Hall, chairman of the House Redistricting Committee, testified that he drew the map ultimately adopted for N.C. House elections. After his direct testimony, Hall faced the day's most heated cross-examination. Allison Riggs of the Southern Coalition for Social Justice, one of the plaintiffs' lawyers, grilled Hall about "concept maps" a legislative staffer drew outside the formal redistricting process.

Hall labeled those concept maps as inconsequential. He said they had no impact on the map he eventually drew. Because no record of the concept maps now exists, Riggs and her colleagues have accused Hall and his staffer of destroying evidence necessary for the trial.

Riggs raised the concern that the concept maps could have incorporated racial and political data that legislative leaders pledged not to use when drawing maps.

Hise's testimony generated less acrimony. Asked about the state Senate map, which he helped to draw, Hise repeatedly stated that his first goal was to keep counties whole when possible, then to draw lines afterward that split municipalities and voting precincts as little as necessary.

Once legislative defendants wrapped up their evidence, the plaintiffs called Rep. Zack Hawkins, D-Durham, a member of the House Redistricting Committee. He criticized the redistricting process. Hawkins testified that Hall had promised the committee no outside maps would be used in the process.

Hawkins also advocated that the legislature slow down the redistricting process, he testified. Legislative leaders rejected his request.

The General Assembly's enacted maps are scheduled to be used in 2022 elections for all 120 N.C. House seats, all 50 state Senate seats, and North Carolina's 14 seats in the U.S. House of Representatives.

But Democrats and their ideological allies are asking judges to throw those maps out. Critics claim Republican lawmakers engaged in extreme partisan gerrymandering and possible racial gerrymandering when developing the maps.

The N.C. Supreme Court accepted the map critics' request to shut down candidate filing for 2022 elections. The state's highest court also delayed all N.C. primary elections from March 8 to May 17.

The Supreme Court also ordered the three-judge panel to hold a trial on the maps and issue a ruling by Jan. 11. Any appeal of that ruling must be made directly to the Supreme Court within days of that deadline.
Go Back