Am I Out of Touch With Reality, or Instead Are the Authoritarian Elites? | Eastern North Carolina Now | I watched with great interest the small comments made by DOJ Attorney General Merrick Garland, in an even shorter press conference, about a most serious matter, and yet, I took nothing he said seriously.

Am I Out of Touch With Reality, or Instead Are the Authoritarian Elites?

Login to Send a Private Message to Stan Deatherage
Publisher's Note: This series of posts on this one issue - The Unprecedented FBI Raid of President Trump's Mar-a-Lago Estate - can all be found here on ENC NOW.

I watched with great interest the small comments made by DOJ Attorney General Merrick Garland, in an even shorter press conference, about a most serious matter - the unprecedented raid of President Trump's Mar-a-Lago estate on August 8, 2022 - and yet, I took nothing he said seriously. How could I?


The Puppet AG went and gone and dun'it, while struggling with his most natural and unintended Granny Clamphett impersonation: Below.

When it comes to government, I am a serious guy. I do not take the elected public servant /constituency paradigm frivolously. In my opinion, there are others that do, even to the point of grand hypocrisy. Attorney General Merrick Garland is a prime example of such grand hypocrisy, operating more as a Democratic Socialist operative rather than a serious advocate for law and order, as is his constitutional charge to do so. 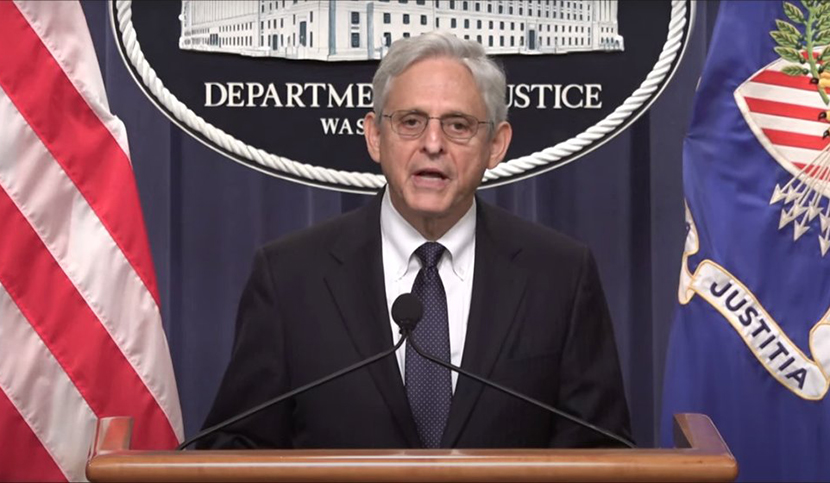 Joe Biden AG Merrick Garland explains why he is explaining nothing: Above.     Screenshot

Rather than address the monumental crimes that have ravaged this Republic, from the historically Democratic Socialist controlled cities in the north, and the west; while the southern and western states are continuously impacted, tragically, by the Biden /Harris Open Southern Border and Resettlement Project; an unconstitutional initiative responsible for millions illegally crossing our sovereign southern border to take advantage of our dwindling resources promised to them by this Leftist regime, whose sworn intent is to destroy the Rule of Law in the United States of America, and remake our Constitutional Republic into a Socialist Hellhole, with Elitists becoming even more advantaged, and the hard working patriots that make this Republic work relegated to become their serfs for perpetuity.

America's First Idiot President has promised this to his growing non patriot wing of the Democratic Socialist party, and has proved relentless in this endeavor, but now knows that there is much work to laying waste to the foundation of this Constitutional Republic, with so many pesky patriots remaining to stand in his feeble way to complete this evil, unnatural and unholy task. The 45th president of the United States of America, duly elected twice, could well seek his second term to become the 47th president of these states united, by winning an unprecedented third election (here in modern times after the passage of the 22nd Amendment).

Another unprecedented first - the raid of President Trump's Mar-a-Lago estate to discover whatever evidence that might be present or planted upon his estate's premises - was a bold plan hatched by the corrupt Biden Administration, and his confirmed Lapdog Attorney General, who is proved to be more concerned with designating concerned parents as "Domestic Terrorists," when advocating for their children's education rights than enforcing the federal codes against real criminals - the scary kind that generally vote Democratic Socialist.

Now that the America's First Idiot President Administration has revealed its plan to defame President Trump as its bold political initiative to retain their Democratic Socialist control of the Republic's economy, over its foreign affairs, and its conversion into a Socialist state, the diminutive Merrick Garland, as henchman for the Idiot President, will need to contrive something really big against Mr. Trump; to stick some style of framing of a contrived illegal act, and it must be big, really big, I mean Hunter-Biden-big, if they are to ever pull this endeavored contrivance off.

With the January 6 "Insurrection" farcical show trial and comedy event lacking in real public interest, and the Democratic Socialist congressional re-election polling in the basement, I can understand their innovative banana republic initiatives; however, it might be otherwise useful to consider that real Republicans could have a constitutional plan up their legislative sleeves as well as a bold counter measure. Its called Impeachment, and their mounting list of those articles are growing at a precipitous rate. Patriots know that political game as well as the non patriots, whose recent failed attempts to collect more and bigger political prisoners is hitting a political wall ... those tactics reminding real patriots of the many failed communist regimes of modern times; likewise, Joe Biden's fully sophistic purpose of installing anti American ideals to narrowly guide what he would endeavor to destroy. This is what extraordinary hypocrites are capable of ... which is an evil many of us are becoming quite to use to.