Hero | Beaufort County Now | Famed Chinese Director Yimou Zhang rendered in images, sound and story his poem to his country men, and the world, the allegorical beginning of the Qin Dynasty, and the difficult and bloody birth of what is today the People's Republic of China.

Long before one can ever "go home"

Famed Chinese Director Yimou Zhang rendered in images, sound and story his poem to his country men, and the world, the allegorical beginning of the Zhou Dynasty, and the difficult and bloody 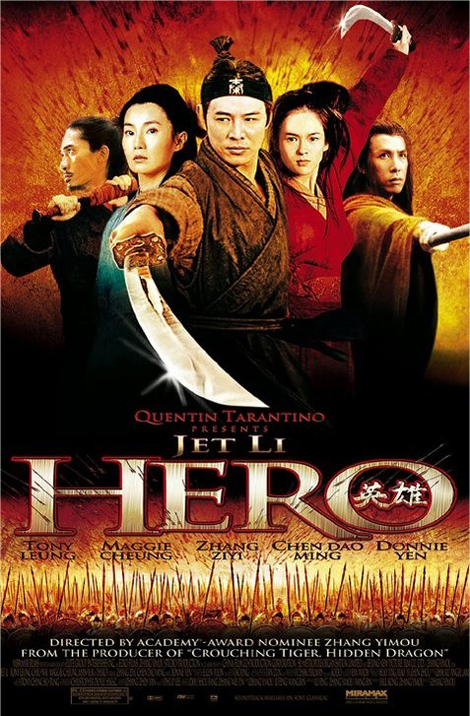 birth of what is today the People's Republic of China.

Director Zhang, who is reviewed here in "The Floweres of War", employed copiously his standard stream of rich images, balanced by an underlying river of melody, by Tan Dun, to create this film's representation of the birth of the Qin Dynasty from the long reign of the Zhou Dynasty thus consolidating the 7 warring states into the nexus of a unified China, which has existed for nearly 23 centuries through today's Communist sociopolitical construct. The extra-visual director told this national birth song in the brilliant colors of allegorical truth reminiscent of the best of nationalist propaganda told anywhere, even here in America.

Employing the joint efforts of fellow screen writers: Feng Li, Bin Wang, and Director of Photography: Christopher Doyle, Director Zhang built this palpable visual epic on the an amalgamation of the separate instances of the multiple assassination attempts of the ruthless ruler, Qin Shi Huang, of the formidable warring state of Qin. This tale, based on these assassination attempts, the most notable of which was the attempt by Jing Ke, was constructed by Director Zhang to tell the complex legend the ruthless First Emperor as a metaphor to express the strength of a unified China then and today. 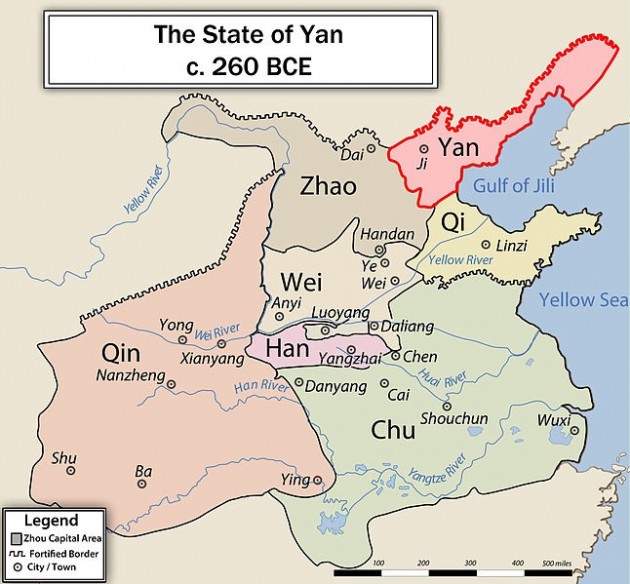 The 7 warring states of the Zhou Dynasty: Above.

[For all of you who have a limited knowledge of the first Emperor of a unified China, Qin Shi Huang: This emperor enslaved his people to build the Great Wall of China, kept them enslaved to build his tomb with nearly 10,000 life-sized "Terracota Soldiers", entombed possibly thousands, of engineers and supervisory workers, alive, who may know the secrets of the tomb's construction, murdered an entire region of subjects because of their special knowledge that they had of a profecy of his imminent demise (and, he definitely wanted to squash that rumor), and ultimately dies, at the age of 47, of Mercury poising, because his court alchemist told him that by drinking doses of Mercury, he would enjoy impmortality. Yeah, that first Emperor of China.


Qin Shi Huang lived large, and in total abject paranoid fear of assasins; however, ironically died by his own hand of the Mercury poisoning.] 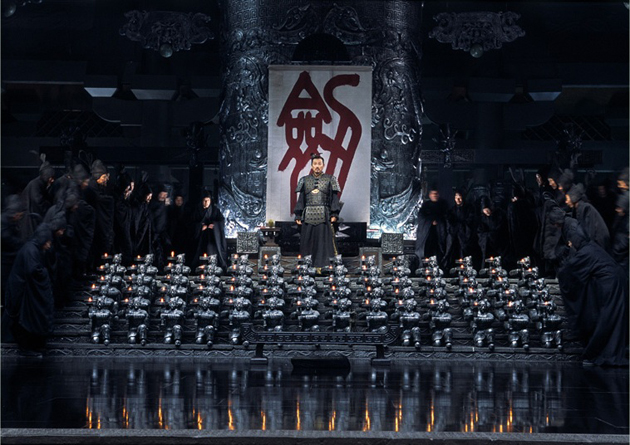 Actor Daoming Chen stands as the King of Qin, the ruthless ruler who had staved off multiple assination attempts to become the first Emperor of a unified China: Above.

Also central to the Director's thesis was the allegorical selfless devotion of all of the assassins to a variety of separate ideals, with an eventual climax based on the ultimate sacrifice to the betterment of a unified China, a unified people, irrespective of the terrible consequences to achieve such. This nationalistic theme is so richly emblematic of the modern history of Communist China, one must consider the obvious correlation to understand why and how China's fascist government allowed this film to be made, and this legendary story told.

The film's story begins by written narrative, with Tan Dun's subtle but dramatic film score building in one's audio senses, stating in text, "In the Kingdom of Qin was ruthless ruler. He had a vision to unite the land to put an end, once and for all, to war. It was an idea soaked in the blood of his enemies."

Is this not an unwavering symbol of Mao Tse Tung's cultural revolution 22 centuries later, which he employed to fortify the foundation of a Communist China? 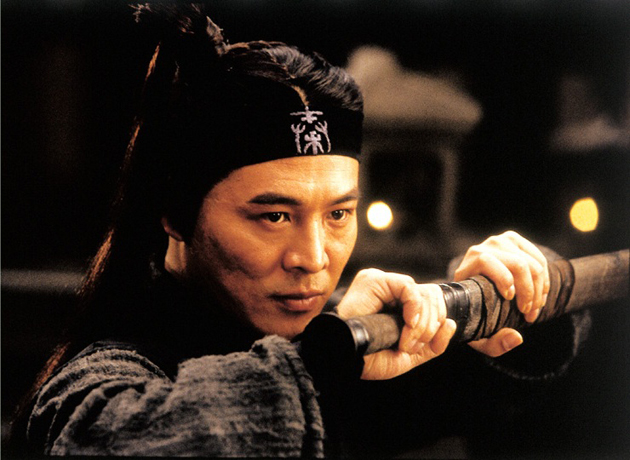 Enter the Hero, Nameless, Jet Li, as the allegorical virtue of sacrifice then and now: Above.

In every epic story, where there are two distinct factions warring for their implacable ideals, there will always be the perception of the tyrant (at least by our American precepts) and as adversary, the hero. In "Hero", the lines are blurred, but still distinct as revealed in the riveting climax of this tale told in allegorical truths, stated through the symbolic dreams of men.

As the film opens, in the aforementioned preamble of text and sound, the Hero, known only as Nameless, perfectly played by the incomparable Jet Li, is a lowly prefect in the outer reaches of the Kingdom of Qin, who is summoned to sit with the King of Qin, played by Chinese character actor, Daoming Chen, to discuss his three separate conquests over the legendary assassins from the enemy warring state of Zhao: Flying Sky, played by Donnie Yen, Snow, played by Maggie Cheung, and Broken Sword, Tony Leung Chiu Wai, and to richly reward the Hero, Nameless, as was the law of Qin. 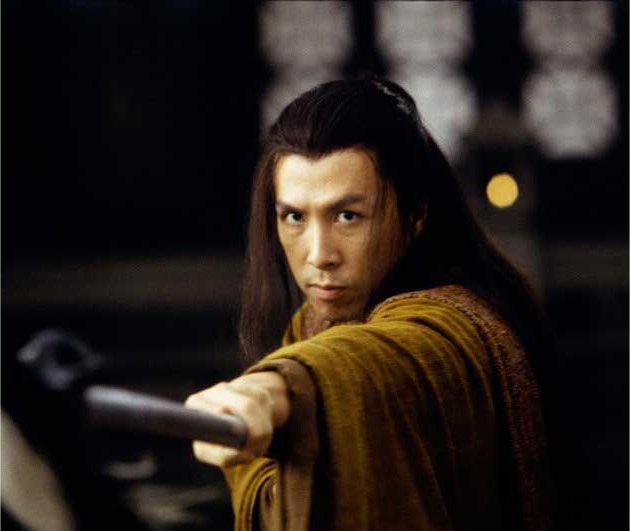 The Assassin Sky, Donnie Yen, and his long spear / sword was the first of Nameless's conquests in the tale he told the King of Qin: Above.

As Nameless received his many undesired rewards, he was allowed to advance toward the king, in increments of paces, from the beginning point of 100 paces, to tell his tale of conquest, and reassure the King of Qin of the story's veracity. As the story unfolded, and Nameless advanced within striking distance, the King of Qin began to doubt Nameless's extroidinary tale, explained in such rich imagery, but it was too late for the king since the nameless assassin was now so close. As the King of Qin pondered his inevitable fate, he asked for more details, an enhancement of this incredible tale of cunning and valor, to better understand his adversary, and their fates intertwined. 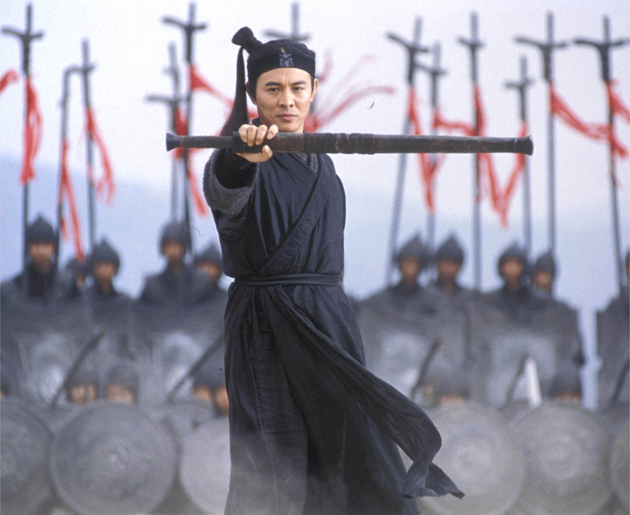 Nameless, Jet Li, prepares to match his adversary, the Assassin Flying Snow, before the Army of Qin encampment, so deep in the Kingdom of Zhao: Above.

It was at this moment, when the King of Qin realized that all the tales expressed by Nameless, which were so well woven by his infective imagery deep within his own conciousness, were but an effective ruse developed by his enemies to gain intamacy, but, alternatively, rendered a deeper understanding to the king of his own purposeful existence. At this point in the film, the King of Qin and the nameless assassin shared a transcendental plane of conciousness and understanding that would forge the independent fates of bothe adversaries, and a future nation in the balance. It was powerful moment in and extroidinary film, irrespective of the propagandized point that was arbitrarily made to some, and it that one communicative point of exercise, one realizes just how profound a multidemenional story Director Yimou Zhang has told in "Hero". 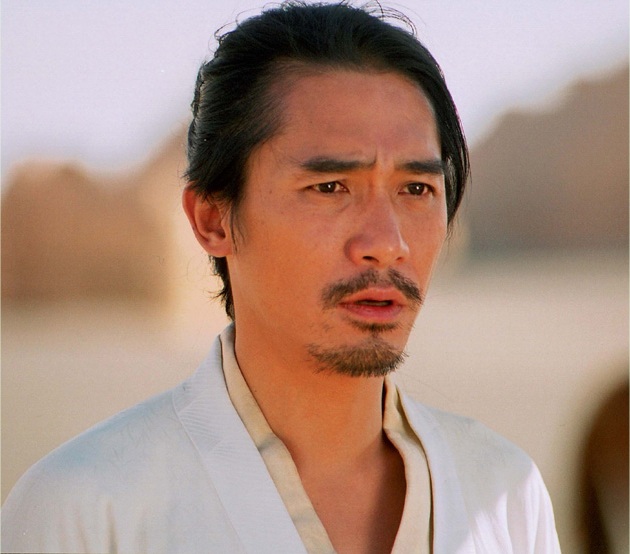 The Assassin Broken Sword, Tony Leung Chiu Wai, holds in his heart the rich irony that is the nexus of the central theme that ultimately lends its support to the consolidation of the King of Qin's one unifying ambition: Above.

And even if the viewer cannot immediately grasp this singular truth, the film is so beautiful made to tell its story in the rich textures of image, color, sound and martial arts fury that its art is captivating, inviting and remarkably invigorating. Personally, I had to see the film thrice to fully understand its total tone and message, and still I was rewarded, each time, by the film's artistry of near perfection in its use of image and sound, the subplots of tales told in imagery, and the multiple love stories between man and woman and Man and country. 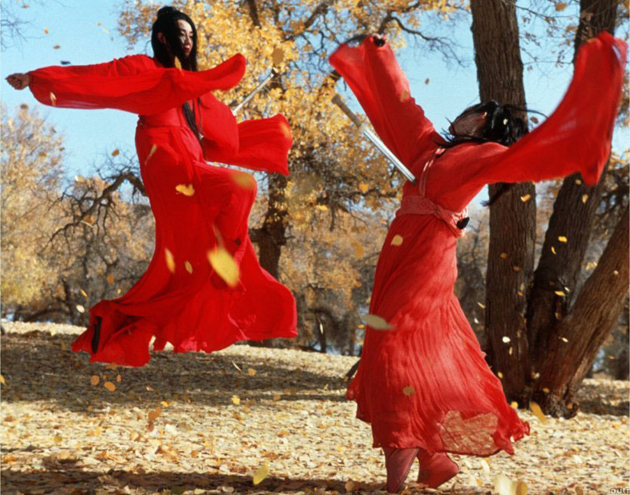 The ethereal battle of Snow (left), Maggie Cheung, and Moon (right), Ziyi Zhang, in the esoteric imaginings of the tale of both teller and listener: Above. The "dream state" imagery of flying marial arts, reminiscent of Director Yimou Zhang's other classic films: "Crouching Tiger, Hidden Dragon" and "House of Flying Daggars", continues here unabated and express well the boundless spirit of some among us. Here the lovers, accomplices and often adversaries of conflicting ideals, Flying Snow, Maggie Cheung, and Broken Sword, Tony Leung Chiu Wai, square off for a duel somewhere within the imaginings of this fabled tale: Below.