Published: Monday, September 12th, 2022 @ 1:53 am
By: Daily Wire   ( More Entries )
Publisher's Note: This post appears here courtesy of the The Daily Wire. The author of this post is Dillon Burroughs. 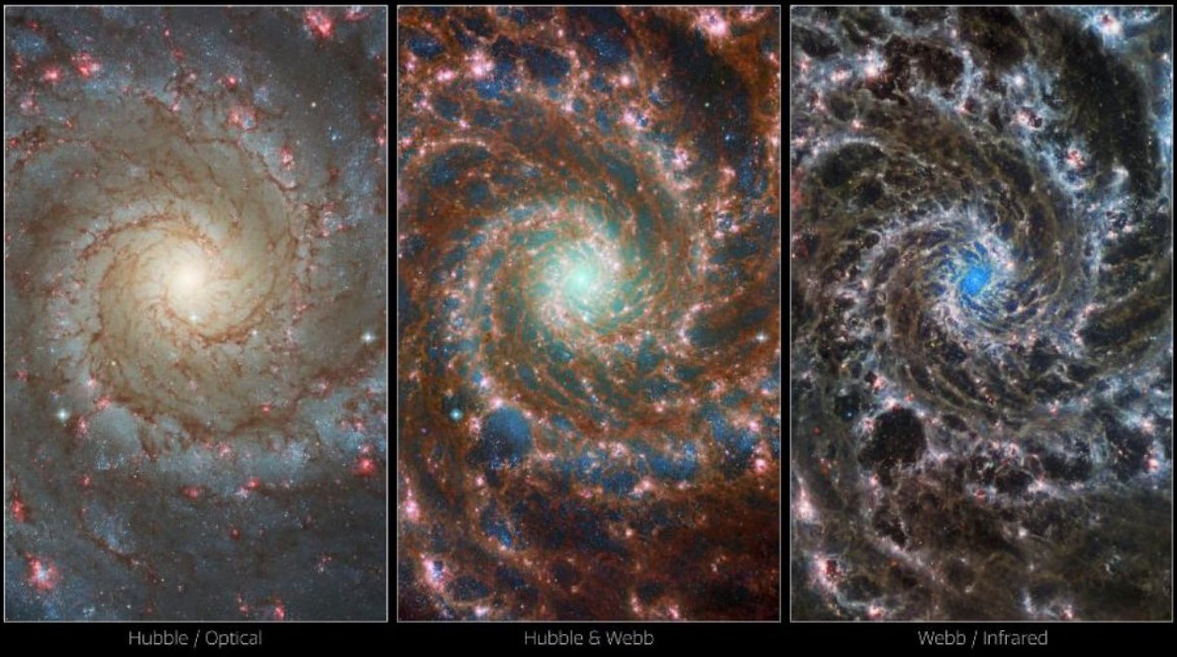 New images released Monday by NASA and the European Space Agency (ESA) offer a stunning look at the Phantom Galaxy, M74, which is about 32 million light-years from Earth.

"The addition of crystal-clear Webb observations at longer wavelengths will allow astronomers to pinpoint star-forming regions in the galaxies, accurately measure the masses and ages of star clusters, and gain insights into the nature of the small grains of dust drifting in interstellar space," the ESA wrote in a statement with the new images.

The pictures included one shot from the Hubble Telescope focused on optical imaging, an infrared photo from the Webb Telescope, and a combined image to offer unique insights from the two telescopes.

New images of the spectacular Phantom Galaxy, M74, showcase the power of space observatories working together in multiple wavelengths. Here, @ESA_Webb and @HUBBLE_space compliment each other to provide a comprehensive view of the galaxy 👉https://t.co/2KyntuPVZ5 #ExploreFarther pic.twitter.com/iyRflf7PGP


The Phantom Galaxy is located within the constellation Pisces, offering clearly defined spiral arms. The new images provide a wealth of information for astronomers investigating the formation of spiral galaxies.

"Webb's sharp vision has revealed delicate filaments of gas and dust in the grandiose spiral arms which wind outwards from the center of this image," the ESA's statement noted.

"A lack of gas in the nuclear region also provides an unobscured view of the nuclear star cluster at the galaxy's center," it added.

Scientists continue to be surprised at the new images and research emerging from the latest findings of the Webb Telescope. The project, in which the ESA partners with NASA, has led to various discoveries since its launch in December.

The July photos were presented along with new information regarding observations of tremendous interest to the scientific community. The images are part of a larger research project to chart 19 star-forming galaxies in the effort to study early star formation.

"We hadn't really expected it to be this good, to be honest," said planetary astronomer Imke de Pater, professor emerita of the University of California, Berkeley, in a blog released by NASA with the images.

"It's really remarkable that we can see details on Jupiter together with its rings, tiny satellites, and even galaxies in one image," she said.

The Webb Telescope is expected to provide data for at least five years, with a goal of ten years. Its location is one million miles from Earth (1.5 million kilometers), according to the telescope's website.

At just 21.7 feet wide (6.6 meters), the relatively small device is making a giant impact through each image it communicates to Earth, offering glimpses of the universe previously never seen.
Go Back