A Decarbonization Portfolio Must Be Low-Cost and Reliable | Eastern North Carolina Now | A law passed in 2021 required that the “decarbonization” plan approved by the state Utilities Commission to be reasonable, set forth the least-cost path to compliance, and maintain or improve grid adequacy and reliability

A Decarbonization Portfolio Must Be Low-Cost and Reliable


Background: Duke Energy Progress, LLC and Duke Energy Carolinas, LLC (jointly, "Duke") recently filed its Carolinas Carbon Plan with the North Carolina Utilities Commission (UC) as directed by House Bill 951, passed into law in 2021. The Duke plan includes four alternative portfolios for achieving the two phases of CO2 emissions, a reduction by 2030 (or thereabouts) in North Carolina's carbon dioxide (CO2) emissions from energy generation by 70% from where they were in 2005, and "carbon neutrality" by 2050.

Crucially, the law (see discussion here, here, here, and here) requires that the plan approved by the UC must, with emphasis added:


What's Not Under Consideration by the Utilities Commission: A Least-Cost, Reliable Scenario

In a series of posts, I have discussed each of the four Duke portfolios according to standards required by law of the UC. They are viewable here: Portfolio 1, Portfolio 2, Portfolio 3, and Portfolio 4. Those discussions demonstrated how none of the Duke portfolios would meet the law. They would all:


North Carolina electricity consumers have to be wondering: Is this it? Four proposed plans that all place great reliance on unreliable, expensive, and land-intensive resources. Four proposed plans that, as a result, threaten capacity shortfalls in extreme weather conditions. None of them can meet the law's requirements - but the UC should not think that they are somehow obligated to pick one of the four paths regardless, just because they've been shown no other options.

Having four proposed options doesn't mean there are only four options. It'd be like saying, We're going to eat light and healthy tonight. Our choices are deep-dish pizza, double cheeseburgers and onion rings, fried chicken and gravy, or a bowl of fettucine alfredo with garlic knots. No, there must be other options to consider.

The clear language in the law is for them to work out the way to achieve CO2 emissions reductions goals without piling up the burden of electricity prices on people or causing power outages amid cold snaps or heat waves, when people need it the most.

Even if self-interested stakeholder-cronies push for any one of those portfolios, none of them meet the reliability standards in law. It's not surprising. Greater efficiency and reduced costs tend to go hand-in-hand.

Least-Cost and Reliable Decarbonization: A Portfolio in the Letter and Spirit of the Law

For all those reasons, in our analysis of the Duke plans presented before the UC, the John Locke Foundation's Center for Food, Power, and Life also included a model "Least Cost Decarbonization" scenario. This portfolio achieves "similar rates of decarbonization at a lower cost, utilizing more reliable generators."

As explained in the analysis:

This portfolio is predicated on the flexibility and discretion provided to the Commission in HB 951 to determine the optimal timing and resource mix to achieve the least-cost path to HB 951's CO2 emissions reduction targets.

To this effect, the LCD would utilize existing coal plants to mitigate rising natural gas prices and keep these units online until the mid-2030s, when new nuclear power plants would be brought online to replace them. This strategy is consistent with the letter - and the spirit - of HB 951, which seeks to optimize low costs and reliability by providing flexibility on the timeline for coal unit retirements.

This approach would also minimize fuel supply risks for natural gas, which could be constrained by a lack of pipeline capacity.

While this scenario would not meet the 70 percent reduction in CO2 emissions by 2030, relative to a 2005 baseline, HB 951 specifies that the Commission may approve a Carbon Plan that achieves the target after the specified dates "in the event the Commission authorizes construction of a nuclear facility or wind energy facility that would require additional time for completion due to technical, legal, logistical or other factors beyond the control of the electric public utility, or in the event necessary to maintain the adequacy and reliability of the existing grid."

Under the model "Least Cost Decarbonization" (LCD) portfolio, the amount of installed capacity on North Carolina's electric grid would increase from 36.3 gigawatts (GW) in 2021 to 39.2 GW by 2035 (7.9%) and increase to 46.8 GW by 2050 (28.9%). That's a third or less of the increases in the four Duke proposals (which range from 84.3% to 92.3%) and right about the expected rate of growth of North Carolina's population (31.6%). With such efficiency, there is no overbuilding of resources that raise even more costs on consumers. 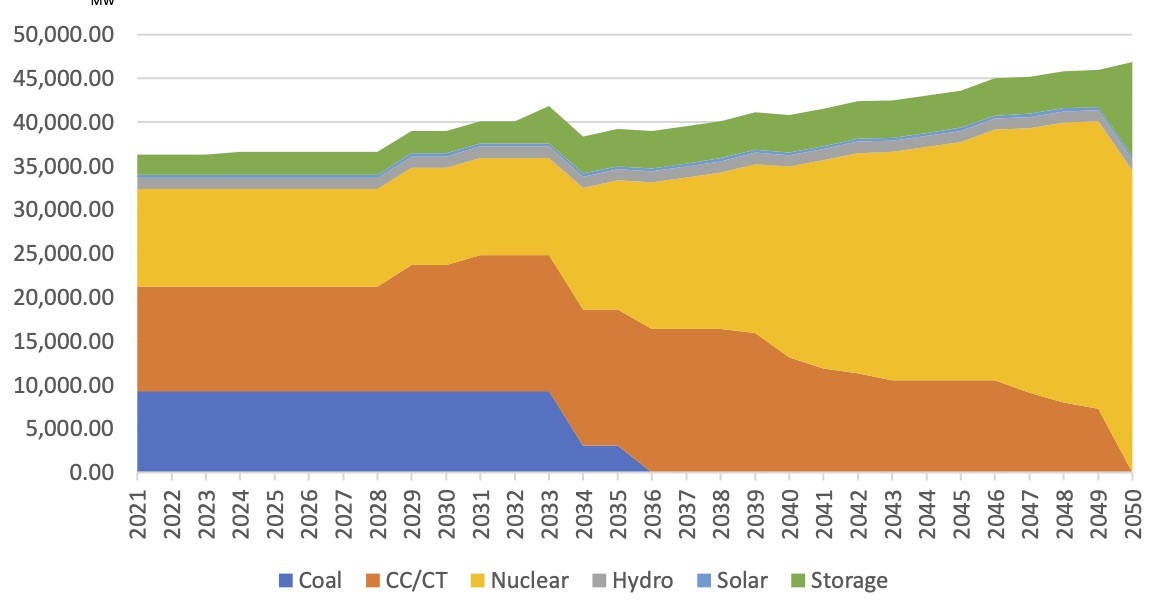 The model LCD portfolio would cost $107.9 billion through 2050, much of which would occur after 2035. Those expenses include:


Even under this portfolio, rates would increase substantially for all three classes of ratepayers, though not as much as the Duke portfolios. Here are those consumer impacts in brief:

The model LCD portfolio would have enough firm dispatchable capacity to meet peak demand every year till 2050, at which point adequate storage capacity - charged using reliable nuclear, not unreliable wind or solar - would provide the needed power.

Also, the LCD scenario maintains hourly reliability through a mixture of nuclear power and storage and would not suffer any shortfalls, especially not the 31-41 hours posed by the four Duke portfolios during a model week in August. 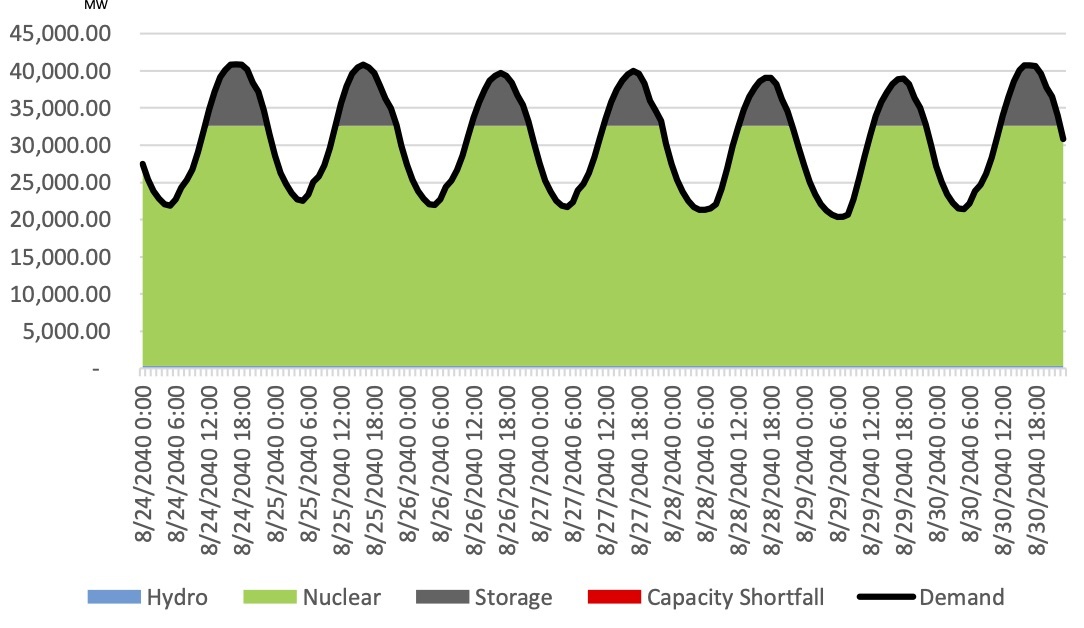 More in-depth discussion of the four Duke portfolios and the model LCD portfolio can be found at the Center for Food, Power, and Life's report, "Analysis of Duke Energy's Carolinas Carbon Plan and a Least Cost Decarbonization Alternative."
Go Back