John Kane, Jr., son of successful Raleigh land developer John Kane, told Carolina Journal that he was hired Aug. 12 as a Wake County poll assistant and then dropped for vague reasons on Sept. 12. He believes the Wake County Board of Elections ignored state statute by not taking into account partisan balance among workers when relieving him. Kane also believes Republicans have dropped the ball on maintaining the partisan balance of poll assistants they are entitled to by law.

Kane said he was selected to be a poll assistant (the election workers who help precinct judges), completed an online training program, and was assigned to 14 of 17 early voting days as well as Election Day at a southeast Raleigh precinct. A week before his in-person training, however, he said he received a call from Tianna Threat with the Wake County Board of Elections telling him there were too many assistants and he was selected as one of those to be dropped.

"I thought to myself, 'That makes no sense whatsoever,'" Kane told CJ. "Having employed plenty of people and seeing the job market right now, there is no one beating down the door to get a nonrecurring, $15-an-hour job that is happening during the typical work day."

He said he called her back and asked what process they used to choose which people would be laid off, and Threat said there were filters but she didn't have them in front of her. Kane asked her to get back to him with those details. Threat called him back on a Friday, and Kane recorded the conversation.

In the conversation, Threat said they looked at whether someone was a "first-timer" as the main reason for cutting someone. But on the filters as a whole, she said, "So I did talk with my supervisor about those filters, but I would not be able to email those things to you."

Threat also said if workers were in an overstaffed precinct, then they might be cut. But Kane pointed out that the board was making the precinct assignments, so there was no reason to think of workers as tied to any specific precinct. Later Threat said there were actually no filters beyond being at an overstaffed precinct and being a first-timer. WCBE responded to a public records request by Kane on this topic saying there were no documents on any filters regarding the process of letting go excess poll workers.

Kane believes he may have been let go for being a Republican, or at the very least, they should have let go a Democrat before considering relieving him because he is a Republican in a county where most precincts have not met their statutorily mandated parity among political parties.

After analyzing publicly available data on the poll workers and their party affiliations, Kane believes the board should have been seeking more Republican workers because Democrats were over represented. Parity, according to Kane's analysis, was achieved in 14 of the precincts, while Democrats had a majority in 183, and Republicans in only 11. A chart Kane put together on this data is shown below: 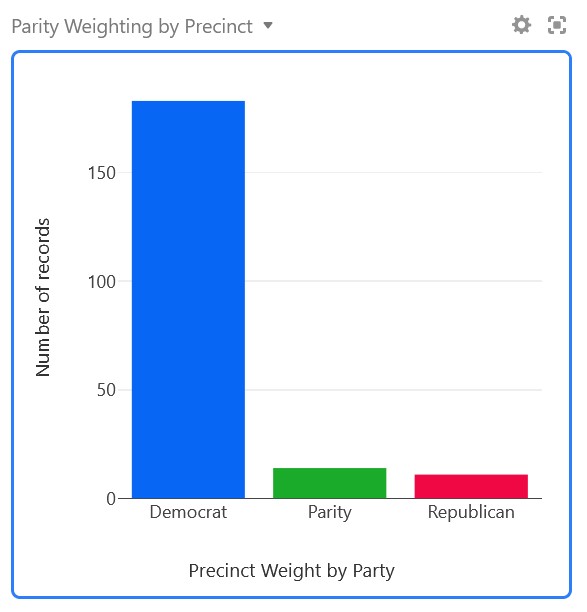 But Kane's concerns on the matter don't end with what he says is unfair treatment by his county board of elections. He is also concerned as a Republican that the party is not insisting on parity by precinct as is their statutory right. Later in NC § 163-42, in section (b), the statute lists a tool the parties can use to make sure there are enough members of their party at each precinct.

It states: "The chairman of each political party in the county shall have the right to recommend from three to 10 registered voters in each precinct for appointment as precinct assistants in that Precinct."

The statute also makes clear that "In making its appointments, the county board shall assure, wherever possible, that no precinct has precinct officials all of whom are registered with the same party."

Kane believes Republicans have not sufficiently insisted on having these workers in place, and he was not shy in blaming the county GOP chairs and N.C. GOP Chairman Michael Whatley.

"I put this memo together and sent it to Michael Whatley and to Donna [Williams, the Wake County GOP chair]," Kane said. "And I said, it looks like the obvious thing to do here is to pursue whatever legal action is necessary and to get the county chairs mobilized to fill these slots."

He said he offered to take on the task himself, but they did not take him up on the offer. Kane said instead, the NCGOP said they were focusing their 5,000 to 7,000 volunteers on poll observers - those who observe the poll workers to make sure they are doing their job honestly and correctly. But Kane said having poll workers in place, in his opinion, should be a much higher priority.

Williams did file the form to make Kane a worker on Oct. 5, and Threat contacted him later that day to tell him that he had been accepted and assigned. This seems to show that while the WCBE did not feel obligated to accept him without a GOP nomination, they did accept that by statute a county party had the right to have their nominations accepted.

Kane is not satisfied entirely with his assignment, however, telling CJ in an email that he "was assigned to a precinct that already had three Republicans staffed (which is less than the number of Democrats) instead of at one of the nine precincts that still have no Republicans."

CJ reached out to the , the Wake County Board of Elections, N.C. GOP, and Donna Williams of the Wake County GOP for response to Kane's comments but did not hear back by time of publication.