Lessons Learned from the 2020 Election: North Carolina’s Limited Capacity to Investigate Election Fraud | Eastern North Carolina Now | Hundreds of people who allegedly committed election fraud were referred to the State Board of Elections in 2020


This article is Part Four of a series highlighting the findings from What Happened In 2020? How 2020 Altered North Carolina Elections and What We Can Do to Fix It," a new report from the Civitas Center for Public Integrity at the John Locke Foundation. Part One covered several North Carolina State Board of Elections (SBE) actions that undermined election security. Part Two examined how the North Carolina State Board of Elections (SBE) and county elections boards suppressed election observers. Part Three reviewed the surge of mail voting in 2020.

While the available evidence indicates that vote totals for the 2020 election presented by the SBE were largely accurate, it does not mean the election was free from fraud and other irregularities. North Carolina's current system of audits and investigations used to catch such fraud and irregularities are incomplete.

Reported Cases of Fraud and Other Election Crimes in 2020

Former President Donald Trump vouched for the trustworthiness of the 2020 election in the Tar Heel State, saying in a statement, "North Carolina produced a big victory for us, without a fraudulent outcome."

However, that does not mean the 2020 election was without fraud or irregularities. The SBE reported receiving 358 complaints of election crimes in the last four months of 2020 and all of 2021. As with other crimes, election crimes reported to officials represents only a portion of all crimes that are taking place. The types of reported election crimes are in the table below.

Number of alleged perpetrators of election crimes in 2020, by the type of crime 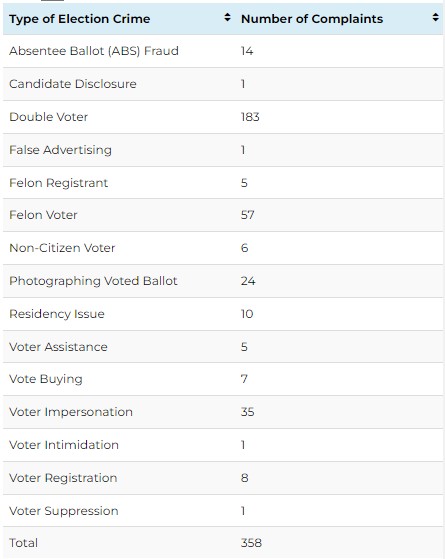 One person whom the SBE believes did not break election law is John Montgomery, whose wife, Dannie Montgomery, was running for the Anson County Register of Deeds in 2020. John allegedly escorted dozens of voters into the polling place and oversaw them as they marked their ballots. In at least one instance, John marked a ballot while the voter stood back with his hands in his pockets. Under North Carolina law, someone may assist a voter in marking his or her ballot only if the voter is disabled, blind, illiterate, or a near relative of the person assisting.

(Since the report on the 2020 election was published, I have heard via email from the Anson County Board of Elections that the SBE told them that "there was no illegal voter's assistance done by Mr. John Montgomery in 2020 General Election." It would be an example of one of the multiple bottlenecks that prevent criminal investigations of alleged election crimes.)

Few Election Fraud Referrals to Prosecutors and a Dearth of Prosecutions

In North Carolina, county election officials refer suspected election law violations to the SBE. The cases are subsequently reviewed and, if a report is determined to be substantive, referred to whichever state or federal law enforcement agency is appropriate.

Of the 358 allegations of election crimes referred to the SBE, it referred only 61 to prosecutors. If history is any indication, few of those cases will result in prosecutions, let alone convictions.

While SBE does not keep data on how many of the cases they referred to prosecutors resulted in criminal convictions or even investigations, we do know that the proportion is frustratingly tiny, as former SBE Executive Director Gary Bartlett complained in 2018:

Bartlett said he referred "more than half a dozen" cases of apparent fraud involving absentee ballots, but no action was taken by law enforcement. "We don't know what happened on the other end because once we provided the information to state or federal (authorities) we don't do a thing unless they ask," he said.

Even when election fraud is prosecuted, the pace of those prosecutions can be painfully slow. Two people who committed absentee ballot fraud in 2016 were not convicted until 2020. Nobody has been prosecuted four years after the alleged ballot trafficking that led to the SBE not certifying the 2018 9th Congressional District race. McCrae Dowless, the alleged mastermind of one of the ballot trafficking operations in Bladen County, died earlier this year and will never have his day in court on election fraud charges.

The current system for investigating alleged cases of election crimes is woefully inadequate.

Election boards must continue to have an independent investigation capacity to make timely determinations of whether the alleged fraud was widespread enough to cast doubt on the outcome of elections.

In addition, the General Assembly should pass legislation creating a body tasked with independently conducting criminal investigations into alleged election fraud, either as an independent body or housed within the State Bureau of Investigation. That body could also investigate allegations of voter intimidation and other election crimes.

To aid investigations into incidents like what happened in Anson County in 2020, the General Assembly should pass legislation requiring county boards to record the name and address of those who assist people with one-stop or election day voting. Such information is already required from people who assist voters in voting by mail.

The bottlenecks that slow or stop investigations into election crimes must be removed to make our elections more secure.